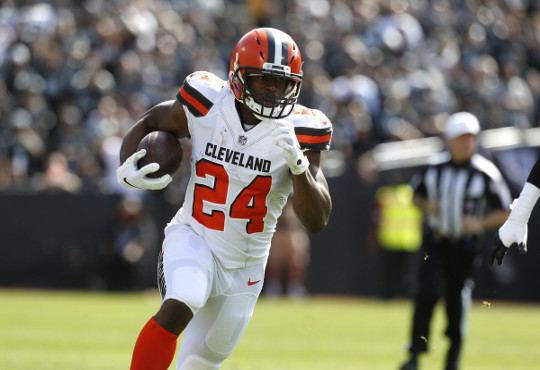 There’s not much more depth needed to analyzing Chubb. He’s a terrific player. He’s been in a good system for rushing volume. But he cedes a lot of work to Kareem Hunt. There’s a chance this year’s Browns lean further toward the pass after trading for both Deshaun Watson and Amari Cooper. There’s also a chance – increasing by the week, it seems – that these Browns watch Watson get suspended for the year and suddenly need to rely on Jacoby Brissett at QB. That would undoubtedly motivate 1 of the league’s highest run rates.

Chubb sports a high weekly ceiling across formats because he’s an efficient runner. But he also falls short on ultimate ceiling and floor by getting light usage in the passing game. Ultimately, he’s just OK at 2nd-round cost in best-ball drafts and a weaker value at market price in lineup-setting formats.

Browns RB Nick Chubb carried the ball 14 times for a total of 104 yards in Sunday's win vs. the Commanders. He also hauled in 1 catch for 12 yards in the receiving game. Chubb now has 10 games this season with 90+ rushing yards, further solidifying his workhorse status in the Browns' offense. Fantasy managers playing into Week 18 will see Chubb go up against a Steelers defense he shredded for 113 yards and a TD in Week 3. That said, the Steelers' front is much stronger now than it was to begin the season, ranking 2nd in Football Outsiders' run defense DVOA since Week 10.

Browns RB Nick Chubb gets a tough matchup in Week 17. The Commanders come in 3rd-best in adjusted fantasy points allowed to RBs, trailing only San Francisco and New England. Washington has allowed just 2 RBs to reach 80 rushing yards all season: Saquon Barkley, who did so in 1 of 2 meetings; and Derrick Henry, who averaged a mere 3.6 yards per rush in their meeting. Washington's run D has softened lately, according to Football Outsiders DVOA, ranking 30th in that area in 2 games since the team's bye. But they also faced Barkley (2nd time) and the 49ers in those contests. Cleveland, meanwhile, ranks just 24th in total offensive DVOA since QB Deshaun Watson stepped in: 27th passing and just 22nd rushing. That struggling offense won't help draw attention away from Chubb, who has also gone from 5.6 yards per carry before the team's Week 9 bye to 3.96 per rush since.

Chubb gets yards but no score

Browns RB Nick Chubb rushed 24 times for 92 yards in Saturday's loss to the Saints. He watched QB Deshaun Watson claim the team's only TD, though, on a run from 12 yards out. Chubb averaged just 3.8 yards per carry, just his 3rd game of less than 4 yards per rush all year. All 3 have come since the Week 9 bye, though.

The forecast for today's Saints-Browns game calls for temperatures in the single digits with sustained winds of 20-25 mph and gusts of 40+. The wind chill is well below zero. They're brutal conditions that will significantly limit the passing and kicking games. Check out our projections for all the Saints and Browns players.

Chubb expected to play vs. Saints

Browns RB Nick Chubb (foot) does not carry an injury designation for Week 16. The workhorse back should be fine for Saturday's contest vs. the Saints. In what should be a bad-weather game, the Browns may look to give Chubb a good chunk of carries. Consider Chubb a low-end RB1 option in your lineup.

Chubb has averaged 85+ rushing yards per game in each of the past 4 seasons. And he's the only player in NFL history with 4 consecutive seasons of 5.0+ yards per carry on 150+ rush attempts. At 27, Chubb should have 1-2 more seasons left of high-end rushing production. Getting Deshaun Watson up to speed should only help sustain Chubb’s value.