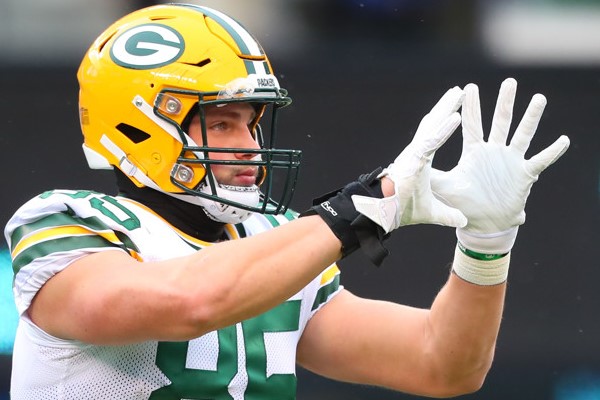 An ACL tear ruined Tonyan’s 2021. Even before the injury, though, he showed some major regression following a breakout 2020.

With the health of his knee in question and a TD-or-bust profile remaining, Tonyan ranks safely outside of TE1 range.

Matt Schneidman of The Athletic writes that Packers TE Robert Tonyan “may not be ready to play Week 1.” Schneidman adds that he’d be surprised if Tonyan isn’t ready to play by Week 6. The veteran tore his ACL at the end of October, so he’ll be ~10.5 months removed from the injury come Week 1. Tonyan’s not a particularly desirable TE2, even if he’s ready for the opener.

Tonyan on the mend

Wes Hodkiewicz of Packers.com writes that the team feels “fine” about their TE situation. He notes that Robert Tonyan is making “significant progress” with ACL rehab. (Tonyan tore his ACL last October.) Interestingly, GM Brian Gutekunst shouted out TE Tyler Davis, a 2020 UDFA who played 121 snaps last season. “I think we might have found something there,” Gutekunst remarked. Tonyan, 28, posted 5 games with 10 or fewer yards prior to the injury. Don’t count on a major rebound.

The Packers re-signed TE Robert Tonyan to a 1-year deal. Tonyan is rehabbing a late-October ACL tear but should be ready for the start of the 2022 season. He came out of nowhere for a 52-586-11 line in 2020 but was sitting just 24th among TEs in PPR points through the first 7 weeks of last year. Tonyan has a shot to grab a larger target share this season with WR Davante Adams' departure.

Packers TE Robert Tonyan tore his left ACL in Thursday night's win over the Cardinals, his agent announced Friday. Tonyan will miss the rest of the season but has a good shot to be ready for the start of the 2022 campaign. His absence leaves the Packers with TEs Marcedes Lewis and Josiah Deguara. We'll monitor that situation, but neither guy is worth adding to fantasy rosters right now.

Tonyan finds opportunity in Green Bay's Davante Adam-less offense. But he'll need to work his way back from a late-October ACL tear. Tonyan turned 28 in April.