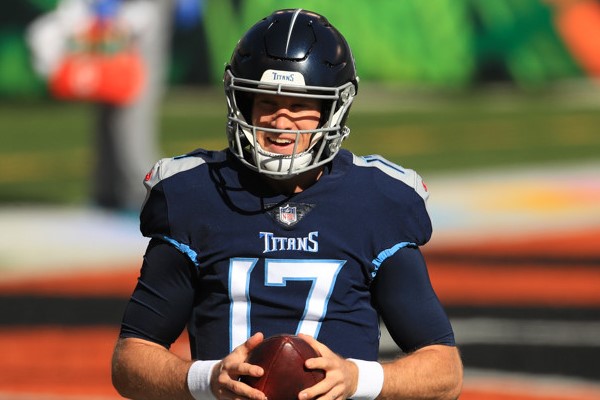 Tannehill has scored as a low-end QB1 in Tennessee the past 2 seasons.

But Tannehill has simply played very well since joining the Titans. And the weaponry looks just as strong this year with the arrival of Julio Jones to join stud WR A.J. Brown and underrated TE Anthony Firkser.

Add it all up and Tannehill again looks like a good bet for borderline QB1 numbers in 2021.

The Titans have promoted Todd Downing to OC. He replaces Arthur Smith, who took the HC job in Atlanta. Downing spent the past 2 seasons as Tennessee's TEs coach. His only NFL OC experience came back in 2017 with the Raiders, who finished that year 17th in total yards and 23rd in points. The more of Smith's offense Downing can keep in place, the better.

Titans shut down after another positive

The Titans have shut down their facility again after a coach tested positive for COVID on Sunday morning, ESPN's Adam Schefter reports. The team had gone a couple days without a positive and seemed on track to play the Bills on Tuesday night. But that's now in serious doubt. We'll continue tracking the situation, but Bills and Titans players should probably be on fantasy benches for now.

The Titans had 2 more players test positive for COVID on Wednesday morning, ESPN's Dan Graziano reports. The team was expected to return to its facility today, but that can't happen now. Sunday's Titans-Bills game is now in serious jeopardy. Fantasy owners need to be prepared to be without players from those teams in Week 5.

The Titans and QB Ryan Tannehill have agreed to a 4-year, $118 million deal with $91 million in total guarantees, according to NFL Network's Ian Rapoport. That $29.5 million average annual salary makes Tannehill the league's 7th highest paid QB. After a mostly disappointing 6 seasons in Miami, Tannehill was awesome for Tennessee last year. Including the playoffs, he completed 68.5% of his passes, averaged 9.0 yards per attempt and tossed 27 TDs vs. 7 INTs across 14 appearances. He was fantasy's #3 QB after taking over as the Titans' starter in Week 7. Note, though, that Tannehill averaged just 25.4 pass attempts in his 13 starts. He'll need to reproduce last year's otherworldly efficiency in order to score as a top 10 QB on that type of volume. Consider Tannehill more of a high-end QB2 in early best-ball drafts.

The Titans announced Tuesday that QB Ryan Tannehill will start Sunday's game against the Chargers. The move doesn't come as a surprise after Marcus Mariota was benched in the Week 6 loss at Denver. But it's a significant shift away from the "franchise" QB. Mariota's in the final year (the option year) of his rookie contract and seems almost certainly done with Tennessee after this season. Tannehill is on just a 1-year deal and already 31. If the Titans can get competent QB play, they have enough pass-catching talent to deliver at least usable fantasy value around the offense -- including under center. We wouldn't consider Tannehill outside of DFS and 2-QB leagues in his first start.