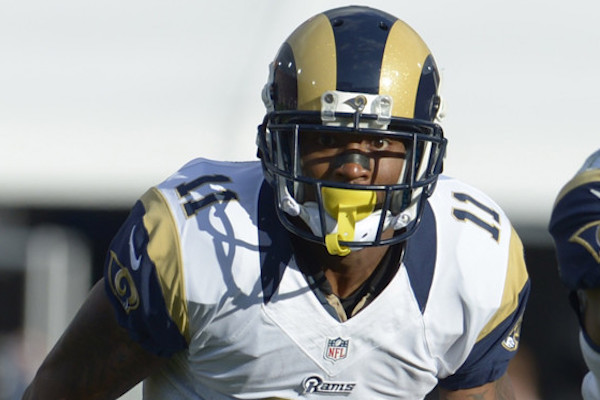 Cowboys QB Dak Prescott highlighted Tavon Austin when asked which of the team's new WRs have impressed him most this offseason. "I didn’t know he was as good of a receiver as he was and could run routes as well as he does, and catch the ball every single time,” Prescott said of Austin. “For me, from that standpoint, he’s not just a gadget, gadget guy. You don’t have to run him on speed sweeps and all that steps opens up the offense and you can use him there as well. He’s a guy you can put out there, inside, outside and trust he’s going to get open.” Austin has flashed throughout training camp, but it's worth noting that he was on the field for just 3 of 10 snaps with Prescott in the preseason opener -- fewer than Michael Gallup, Allen Hurns and Terrance Williams. We'll continue to monitor this WR corps, but Austin's playing time will need to grow if he has any chance to be a fantasy factor.

The Rams have traded WR Tavon Austin to the Cowboys in exchange for a 6th-round pick. The 8th overall pick of the 2013 NFL Draft has been a colossal bust, never topping 58 catches or 509 yards in a season. He's averaging a RB-like 8.7 yards per catch for his career. A special-teams and gadget player at this point, Austin is unlikely to emerge as a fantasy factor in Dallas.

Rams WR Tavon Austin sustained a concussion in the 4th quarter of Thursday night's win over the 49ers. It's the 1st concussion of his career. Austin has become a non-factor in Los Angeles' revamped offense, totaling just 9 touches through 3 games.

Rams WR Tavon Austin has missed the past 5 training-camp practices with a hamstring injury, according to ESPN's Alden Gonzalez. Austin also missed spring workouts after undergoing wrist surgery. HC Sean McVay labeled him "day-to-day," but the missed time is not ideal for a guy trying to learn a brand new offense with a young QB. WR Pharoh Cooper has been getting 1st-team reps in Austin's absence -- alongside Robert Woods and rookie Cooper Kupp.

Austin a full-go at camp

Rams WR Tavon Austin has been a full participant in training camp, according to insider Alden Gonzalez. Austin missed OTAs after undergoing wrist surgery, but it should be a non-issue going forward. We'll see how Los Angeles' new coaching staff plans on deploying Austin this season. He's basically free in drafts, with a recent MFL10 ADP in the 15th round.