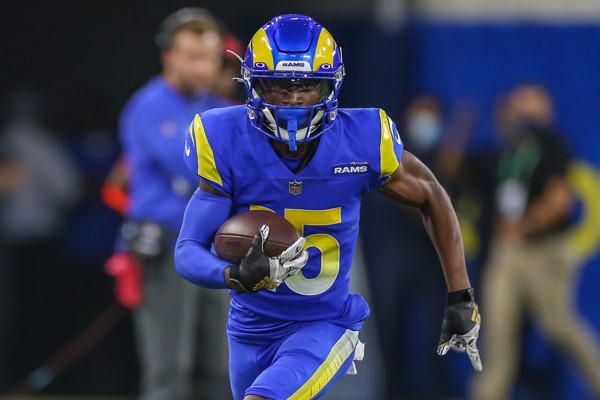 Rams WR Van Jefferson (knee) is out for Thursday night's opener vs. the Bills. He didn't practice all week, so a Week 2 return doesn't look particularly likely. Jefferson's snaps are expected to be picked up by a committee of WRs Tutu Atwell, Ben Skowronek and Brandon Powell. None is a viable fantasy play outside of DFS showdown contests. WR Cooper Kupp, WR Allen Robinson and TE Tyler Higbee should be the clear focal points of the Rams' passing game against Buffalo.

Rams WR Van Jefferson (knee) did not practice on Monday. He's looking like a long shot for Thursday night's opener vs. the Bills after undergoing knee surgery at the beginning of August. Jefferson's absence will leave Tutu Atwell and Ben Skowronek at the Rams' #3 and #4 WRs -- and leave extra targets for WR Cooper Kupp, WR Allen Robinson and TE Tyler Higbee.

Rams WR Van Jefferson will have surgery on his left knee, HC Sean McVay announced to reporters Monday. The issue still doesn't sound major, though. Jefferson is only expected to miss "a few weeks," according to NFL Network's Ian Rapport. The young wideout is "TBD for Week 1." We'll see about Jefferson's status as Week 1 approaches. He remains in play as an end-of-draft option for deeper leagues, though there's obviously risk that the situation limits him into the season. Ben Skowronek and Tutu Atwell look like the top 2 candidates for the 3rd WR role if Jefferson misses regular-season games. We also could see more target share go to Cooper Krupp and/or Allen Robinson in that case.

NFL Network’s Ian Rapoport reports that Rams WR Van Jefferson will “see a specialist on Monday for a knee issue that has been plaguing him.” The wideout has reportedly been “doing maintenance” and is in danger of missing the next few weeks. Rapaport’s report includes the possibility that he’ll need surgery. We’ll watch for more after the visit. Jefferson is only a late-round pick now, carrying limited risk. You might want to back away from him for the next few days at least in best-ball drafts, though. Tutu Atwell might find a significant opportunity boost if Jefferson misses extended time

Rams WR coach Eric Yarber discussed Tutu Atwell, who's now in year 2. “It’s night and day,” Yarber said. “He’s progressing very, very well mentally and physically. The game has slowed down for him. He knows his plays like the back of his hand.” Atwell was criticized for his work habits as a rookie. Apparently, that’s changed over the offseason. “It’s almost like he took things for granted (last year),” Yarber said of Atwell. “But now, he saw how Cooper and Robert Woods prepared and how it translated to on-the-field (success). Atwell was a 2nd round pick last year and doesn’t turn 23 until October. Still, given a loaded depth chart, it’s likely he’ll need injuries (or a trade) to gain any fantasy value.