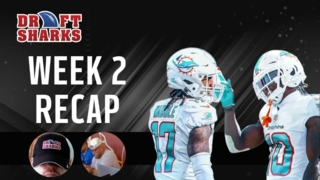 Rams QB Matthew Stafford threw for 272 yards and 3 TDs in Sunday's win over the Falcons. He also tossed a pair of INTs. Stafford's scores went to, of course, Cooper Kupp (twice) and Allen Robinson. He targeted Kupp (14) or Tyler Higbee (9) on 63.9% of his pass attempts.

ESPN's Adam Schefter reports that Rams QB Matthew Stafford had a "procedure" on his right elbow in the offseason "to deal with the pain he experienced last season and to help prepare for this season." Schefter's sources say Stafford's throwing elbow now feels better than it did a year ago. That corroborates last week's words from the QB and HC Sean McVay that Stafford's heading into the season with no limitations. At this point, all we can do is trust the Rams' words on their QB. We haven't lowered Stafford or his pass-catchers in our projections.

Rams say the elbow is good

Asked about the health of his elbow, Rams QB Matthew Stafford said Sunday, "I feel good, no limitations ... I feel great," according to NFL Network's Omar Ruiz. Stafford added, though, that he'll go week to week in determining what he'll need to do for it. HC Sean McVay reportedly added that he would have "no hesitation" with having Stafford throw 50-55 passes in a game, if needed. It's clear that Stafford's elbow isn't all the way back to 100%. But it also seems like he's good enough at least for early-season fantasy football purposes.

King: Stafford's arm "has not fallen off"

After attending Rams practice on Wednesday, insider Peter King said QB Matt Stafford's arm "has not fallen off." Added King, "He really threw the ball well. ... The zip on the ball was very good. I think the reports of the death of his arm have been greatly exaggerated." It's certainly sounding like Stafford's right elbow issue is more of a pain-management thing, and not something that'll impact his play this season.

Rams QB Matt Stafford said Wednesday that his right elbow "feels good" and is "right on track." He admitted that he's not sure when the soreness in that elbow will go away, but he doesn't think it'll impact his performance. "I'm just going out there, doing my work [and] trusting the process that we have," Stafford said. "I know that I'm able to go out there and function at a high level right now. So whatever it feels like, hopefully, continues to keep getting better as it has. But I know that functionally, I feel like I can do everything I need to do. So just trying to continue on that road."

Stafford a full-go in scrimmage

Rams QB Matt Stafford (elbow) was a full participant in Tuesday's scrimmage. He had “great energy, great command… threw the ball incredibly accurately… Really activated all parts of our pass game," HC Sean McVay said afterward. Reports on Stafford's right elbow have trended up over the last week. We'll continue to keep a close eye on him leading up to Week 1.

Rams HC Sean McVay told reporters after Monday’s practice that QB Matthew Stafford had been a full participant. That came in a shorter-than-usual session. But ProFootballTalk reports that McVay said the plan will be the same for Tuesday’s longer workout. It’s obviously good news for Stafford, who has seen managed workloads while he deals with right-elbow trouble

Rams QB Matt Stafford (elbow) threw in full-team, 11-on-11 work in Tuesday's practice for the 1st time in training camp, ESPN's Sarah Barshop reports. The Rams have Stafford on a pitch count as he deals with a right elbow issue that we still don't know much about. But if the team was truly concerned, they wouldn't have him throwing at all in early August. We'll continue to keep an eye on this situation, but it hasn't impacted our Rams projections yet.

McVay on Stafford's elbow: "It's a tricky deal"

Rams HC Sean McVay spoke about QB Matthew Stafford's right elbow issue on Thursday. McVay called it "a tricky deal," "abnormal for a QB” and "things that MLB pitchers deal with," per The Athletic's Jourdan Rodrigue. McVay added that the team explored different treatment options to alleviate the pain this offseason and that the team wasn't caught off guard by the situation when camp opened. “Could he (push through)? Yes. Is that the best thing? We didn’t think so," McVay said. Here's Rodrigue's take after listening to McVay: "While arm pain is never NOT a concern my sense is after some treatment early spring they decided to go with this onload/deload plan which has been on schedule per McVay." Until we hear that the pain in Stafford's elbow is gone -- or at least know exactly what he's dealing with -- he'll carry some elevated risk in fantasy drafts. His situation, of course, also impacts Cooper Kupp, Allen Robinson and the rest of the Rams' skill-position guys.

NFL Network's Ian Rapoport reports that Rams QB Matthew Stafford is "not expected to throw a lot over the next couple of days" to rest his right elbow. Rapoport says the issues has been described to him as "bad tendinitis" and that Stafford had a platelet-rich plasma "type" of treatment over the offseason. That apparently hasn't had the desired effect, as Stafford's throwing arm remains an issue. "Long term everybody in LA thinks this is gonna be fine," Rapoport says. Of course, the fact that he says "thinks" as we're well into the 2nd week of training camp remains cause for concern.

Stafford still has "a little bit of pain" in elbow

Rams HC Sean McVay said Monday that QB Matt Stafford still has "a little bit of pain" in his throwing elbow. Stafford had an injection in that elbow shortly after the Super Bowl and didn't throw at all during the spring. He's thrown some in camp but was held out of team drills on Monday. "We just want to be really smart with somebody that is as important as our quarterback is," McVay said. "[We want to] put together a plan that we feel like is in his best interests and our team's best interests." The Rams continue to downplay this situation. But when a QB is still experiencing pain in his throwing elbow in August, we're on alert.

Rams QB Matthew Stafford gave a lukewarm update on his throwing elbow Saturday: “It’s coming along. I’m kind of right where I want to be and just continue to get it feeling better. Get it stronger. You just lose those reps through the offseason and [I’m] trying to gain some of those reps back at the moment.” On one hand, it’s nice to not get an overly positive/optimistic update from a player on his injury. On the other, we’d love to hear that Stafford is further along. We’re still not altering our outlook, but we’ll be tracking the situation throughout August

Stafford on "pitch count" in camp

Rams HC Sean McVay said Sunday that QB Matt Stafford (elbow) will be on a "pitch count' in training camp. Stafford didn't throw at all in OTAs or minicamp after receiving an injection in his right elbow after the Super Bowl. “Definitely knocking some rust off and feeling it again,” Stafford said. “It’s good to get out there and stress it a little bit and see how it reacts. It’s an interesting thing trying to have a little bit of governor on there, and at the same time, just trying to be as smart as I can. It’s a process. Just going to have to sit there and work through it, trust it. We’ll figure it out as we go.” Stafford and the Rams continue to downplay the situation, but we're always on alert when we hear that a QB is dealing with an issue with his throwing arm. We'll continue to keep a close eye on on Stafford.

Stafford expects to be throwing by training camp

Rams QB Matt Stafford said Wednesday that he'll "definitely" be throwing by training camp, per ESPN's Sarah Barshop. Stafford hasn't thrown during the offseason program so far after receiving an injection in his right elbow after the Super Bowl. "I'm progressing kind of into that and through [being able to throw] at the moment," Stafford said. "So I'm just trying to make sure we're smart, but at the same [time] be as ready to go as I can possibly be come Day 1 when we're out there throwing the ball around." Stafford's health will certainly be worth monitoring as we get into August.

Stafford won't do much until camp

Per beat writer Jourdan Rodrigue, Rams QB Matt Stafford “won’t throw much, if at all, through voluntary spring workouts.” Rodrigue points out that Stafford had an injection in his throwing elbow over the spring, so a conservative offseason approach is wise. The 34-year-old will enter his 14th season in the league this fall.

The Rams and QB Matt Stafford agreed to a 4-year, $160 million extension with $135 million guaranteed. NFL Network's Ian Rapoport notes that it's "effectively a 3-year extension" with "added years for cap purposes." So consider Stafford signed with the Rams through the 2024 season.