League-wide pass attempts were down in 2021 to their lowest mark since 2017, as Matt pointed out in the 2021 QB Scoring Review. That followed 3 straight years of increases in that category.

How did that impact WR scoring? Let's see. 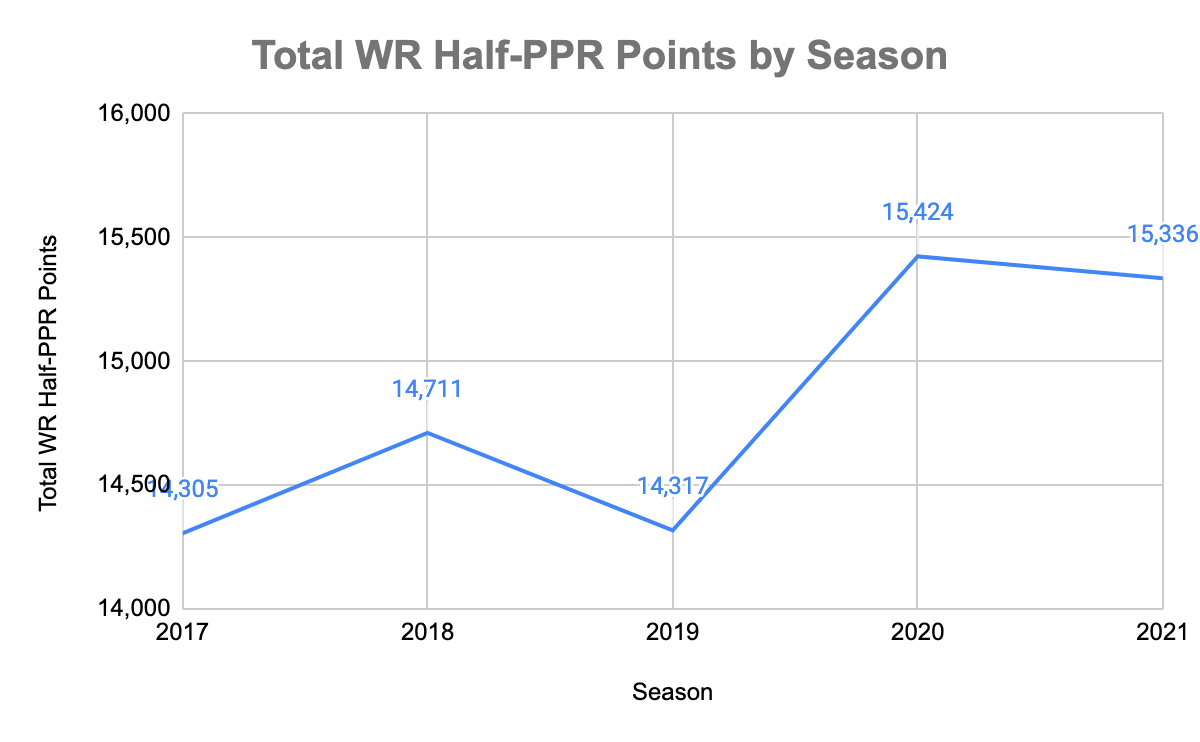 Despite the dip in pass volume and QB scoring, WRs totaled their 2nd most half-PPR fantasy points among the last 5 seasons.

How have those fantasy points been distributed? Here’s a look at the percentage of total fantasy points WR1s (top 12), WR2s (13th through 24th), WR3s, WR4s and WR5s have accounted for over the past 5 seasons.

We saw more condensed scoring last year, with WR1s and WR2s both accounting for their 2nd biggest percentage of total points over the last 5 seasons. WR4s and WR5s, meanwhile, posted their 2nd lowest shares.

If that trend continues, it means that we should be looking to accumulate as many of those top-36 WRs as possible, with a particular focus on the top-24.

And, after analyzing and projecting the WR position all offseason, it does feel thinner than usual. There are a handful of elites and a nice 2nd tier that gets us to around 25 WRs. But the WR3 and WR4 range is full of question marks.

Here’s how we’re attacking the WR position in 2022 fantasy drafts.

Kupp just scored the 5th most PPR points per game by a WR in NFL history and should return to a similar role in 2022. We’re keeping an eye on QB Matt Stafford’s elbow issue. But, as of now, we’re still drafting Kupp inside the top 3 in PPR drafts and no later than 5th in non-PPR.

Jefferson is just as safe a pick as Kupp. His 3,016 receiving yards are the most in NFL history through a player’s first 2 seasons – 261 more than anyone else. He’s back with QB Kirk Cousins this year. And Minnesota figures to throw it a bit more under new HC Kevin O’Connell. Jefferson is a top 4 pick in PPR drafts and shouldn’t fall outside the top 10 in non-PPR.

Chase falls a notch below Kupp and Jefferson only because he has another young, stud WR to share the ball with in Tee Higgins. But we’re not betting against a guy who looked like a generational prospect entering the NFL and then scored the 6th most PPR points per game by a rookie WR in league history. Chase belongs at pick 5 or 6 in PPR drafts and is a later 1st-rounder in non-PPR.

Consider these guys a tier below the top 3: Davante Adams, CeeDee Lamb and Stefon Diggs.

Diggs is the safest of the trio because we’ve seen him turn in back-to-back top 8 fantasy seasons in this Bills offense.

Adams is operating in a new offense this season and dealing with a QB downgrade. But Derek Carr is a quality NFL QB and played 2 seasons with Adams at Fresno State. Adams remains 1 of the most talented WRs in the NFL, so expect his target volume to remain high in Vegas.

Lamb has opened his career nicely, with WR34 and WR22 finishes in half-PPR points per game. Ranking him in this tier is obviously projecting a big leap, but the talent is there – and so is the opportunity. Dallas lost WRs Amari Cooper and Cedrick Wilson this offseason, and WR Michael Gallup is unlikely to be ready for Week 1 coming off his ACL tear.

All 3 of these guys are worth considering at the tail end of the 1st round of PPR drafts and are excellent picks anywhere in Round 2. In non-PPR, they look more like 2nd-rounders – although you can definitely argue that they’re safer than the RBs going in the same range.

The order varies based on your scoring system, but this group generally includes:

Hill and Higgins top this group across scoring systems and make sense starting at the end of Round 2.

The rest of the guys should be valued in Round 3. Moore and Williams will sometimes slip into Round 4 and are the best values of the bunch.

Samuel, of course, is usually a mid-2nd-round pick and a guy we’re avoiding at that price.

Although not a necessity, we generally like drafting at least 1 of the 14 WRs we’ve highlighted so far within your first 4 picks.

Brandin Cooks basically sits in WR1 territory in our PPR rankings and is a high-end WR2 in the half-PPR and non-PPR rankings. He’s 20th to 24th in WR ADP depending on scoring system, usually going in the 5th or 6th round. Make him a priority target in that range of your draft.

If you miss on Cooks – or, ideally, along with Cooks – target Allen Robinson. He’s coming off an ugly season in Chicago but is still only 29 and gets a huge situational upgrade with the move to Los Angeles.

2022 Breakout Pick, Rashod Bateman, should obviously be a cornerstone of your draft plan. He’s carrying a Round 7 or 8 ADP, but we’re not opposed to reaching up in Round 6 to grab him (especially if you’re picking late in the 7th round).

In general, we’re looking to have 3 or 4 WRs through 7 rounds of fantasy drafts.

Here are some of our top targets in the middle rounds of fantasy drafts. Ideally these are your WR4s and WR5s.

London averaged an insane 11 catches, 136 yards and .9 TDs per game last year and became just the 5th WR to get top-10 draft capital over the last 5 drafts. That – plus a downright pitiful WR corps behind him – makes London a strong bet for big volume this season.

Kirk looks like the top WR in what should be a much-improved Jacksonville offense under new HC Doug Pederson. The Jaguars gave Kirk a 4-year, $72 million deal in free agency and have reportedly been using him all over the formation in camp. He sits 37th in our PPR rankings – 5 spots ahead of ADP.

There are question marks on QB Daniel Jones and Toney himself, but those are baked into his 10th-round price tag. Toney flashed elite upside when he was healthy last year, becoming 1 of 8 rookie WRs to average 2+ yards per route run over the past 5 seasons. The other 7: Justin Jefferson, Ja’Marr Chase, A.J. Brown, Hunter Renfrow, Deebo Samuel, Terry McLaurin and Chris Godwin.

Burks got off to a sluggish start this spring but showed up to camp ready to rock. He finds a big opportunity in Tennessee, where the departed A.J. Brown averaged 7.8 targets per game over the past 2 seasons. Burks is a 6’2, 225-pounder who dominated in the SEC over 3 years at Arkansas.

Highlight these guys – all with ADPs outside the first 12 rounds – as high-upside targets:

Big opportunity in year 2 with WR Christian Kirk gone and WR DeAndre Hopkins suspended for the first 6 games of the season. More value in PPR leagues.

16th overall pick of this spring’s draft is an NFL-ready WR with a clear path to #2 duties in Washington.

This rookie is in line to open the season as Dallas’ #2 WR. His deep-ball skills mesh well with QB Dak Prescott.

Big-time talent might have been a 1st-round pick in this year’s draft if he hadn’t torn his ACL in March 2021. Pickens has been dominating at Steelers camp.

New Giants regime made him the 43rd overall pick of this spring’s draft. Robinson is small but dynamic and has been a big part of HC Brian Daboll’s offense in camp.

He’s been lighting up Packers camp and appears to be in line to open the season as 1 of Green Bay’s top 3 WRs. Leading the WR corps in targets is within Doubs’ range of outcomes.