Fantasy football doesn’t have to be complicated.

Take TEs, for example. We can boost our odds of drafting a late-round gem at the position just by targeting guys on good offenses.

26 TEs were drafted outside the top 12 and then finished inside the top 12 in half-PPR points per game over the past 5 seasons. Here are those 26 guys, along with their team’s rank that year in total yards. Top 10 offenses are highlighted in green; bottom 10 in red. 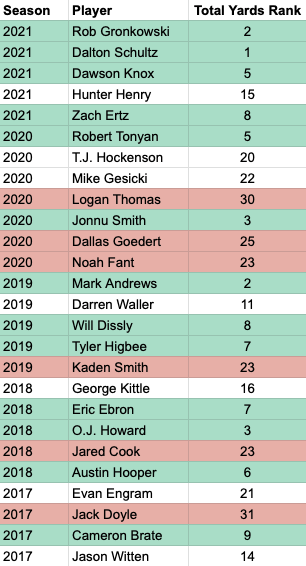 13 of those 26 value TEs played on offenses that finished top 10 in total yards. By comparison, just 6 played on bottom-10 offenses. In other words, your odds of hitting on a late-round TE more than doubled by drafting a guy in a good offense.

But ADP doesn’t necessarily reflect it. Here are TEs 13 through 24 in current Underdog ADP – and then my projection of which guys will be on top 10 and bottom 10 offenses. 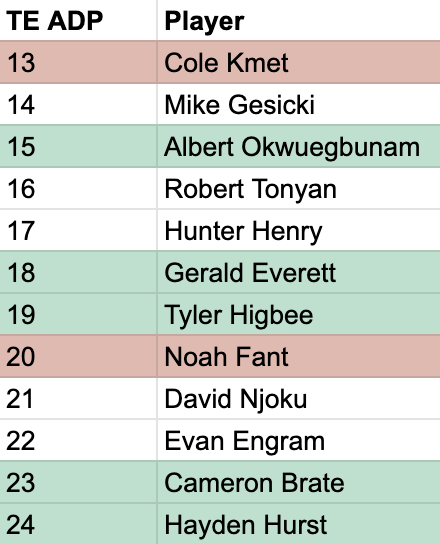 The Broncos finished 19th in total yards last year but have a good chance to jump into the top 10 with QB Russell Wilson in town. That’s good news for Okwuegbunam, who ranked 6th in yards per route run and 11th in Pro Football Focus receiving grade among 35 qualifying TEs last year. He’ll need to hold off 3rd-round rookie Greg Dulcich for the lead job. If he does, there’s top-12 upside here.

The 2021 Chargers ranked 4th in total yards (and 5th in points). They return the majority of last year’s squad, with Everett replacing TE Jared Cook. Cook finished just 19th among TEs in half-PPR points per game last year, but the Chargers obviously believe that Everett is an upgrade.

He’s unlikely to command a bunch of targets as long as WRs Ja’Marr Chase, Tee Higgins and Tyler Boyd are healthy, but Hurst could easily score 6-8 TDs in this high-powered Bengals offense. C.J. Uzomah tallied 5 TDs and finished tied for 19th in half-PPR points per game as Cincinnati’s lead TE last year. Start your lineup with these $6K WRs, and then see what you can build ... 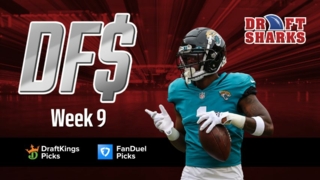 Josh Allen from the top shelf ... or Justin Fields from the bargain bin?

Is Jalen Hurts a "must" play in this down week at QB? And where are the best spots to pay up?