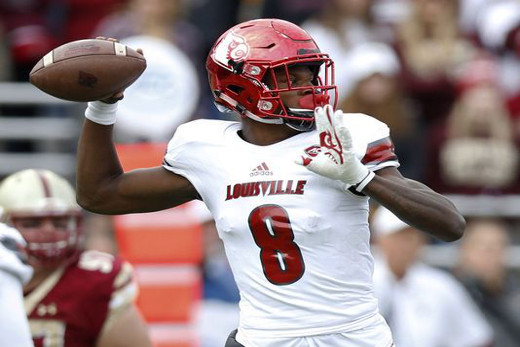 *Jackson threw at the NFL Combine but didn't go through drills.

It didn’t take long for Jackson to break out.

As a junior, Jackson improved as a passer and remained dynamic with his legs. He posted a career-high 59.1% completion rate — not great, but better when you consider Louisville pass catchers dropped 8.6% of their targets. Only 5 QBs witnessed a worse rate, per Pro Football Focus.

PFF’s numbers also show how well Jackson did vs. pressure, as he received their 3rd highest grade in this class under duress.

The 216-pounder put up 1,601 rushing yards as a junior, enough to place him 6th in the country. Jackson popped in 18 more TDs and finished his college career with 10 rushing scores of 40+ yards.

It’s no wonder he’s drawn Michael Vick comparisons. The two have even developed a relationship where Vick’s become a mentor.

As one of the most exciting prospects in this class, Jackson’s tape was a blast to watch. But can his skill set translate to the NFL?

Before we dig in, consider these insightful comments from one NFC scout (via Walter Football).

"Lamar has no idea how to throw with his core and legs. He's all arm and wrist action right now, very much like Cam [Newton] but much cleaner delivery. When he gets some serious coaching on driving his body into throws, he could be insane. Completely blank canvas. It's amazing he threw it as well as he did seeing how much work he needs in that aspect alone. There's not a QB coach alive who looked at that and didn't feel as if they could make a very good passer. Old rule: you can fix the feet - not the mind or arm."

Let’s get Jackson’s flaws out of the way.

As a pure passer, he’s simply not consistent from throw to throw. Several tape evaluators — like NFL Network’s Daniel Jeremiah — have noticed Jackson’s narrow base. And that hurts his accuracy.

As frustrating as Jackson can be passing, he'll still dazzle with tight window throws...

While Jackson showed enough in college to be groomed as an NFL passer, it's his legs that'll really excite teams (and fantasy owners). According to PFF, 73% of his rushing yards came on designed runs. So this wasn't just a guy looking for any excuse to scramble.

This first clip is an absolute treasure, combining elusiveness, awareness, arm strength and accuracy. There's clearly some Russell Wilson to his game.

Jackson's rushing highlights are truly amazing. I could post dozens of clips in this space -- but a pair of 'em gets the point across.

NFL teams will decide whether Jackson fits their offense -- or whether he's special enough to tailor an offense to him. Hopefully, Jackson's OC at least utilizes his legs with concepts like zone-reads and bootlegs.

Do I have concerns with his arm? Sure. His accuracy was inconsistent. I wouldn't expect him to become one of the league leaders in completion rate. While it's not a major concern, Jackson also lacks a cannon of an arm. His throw velocity was subpar at the NFL Combine.

The good news? Both accuracy and arm strength can be improved if his mechanics and footwork are optimized. That'll surely take some time, though. So while Jackson's a potential 1st round pick, don't bet on him starting right away.