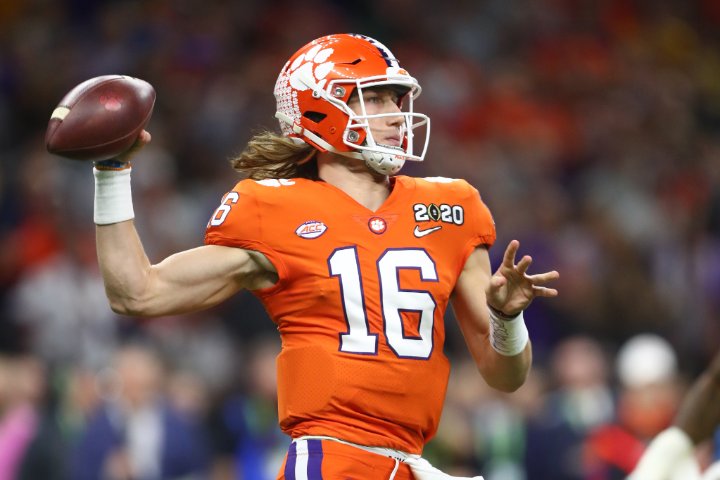 When Lawrence goes 1st off the board in this April’s NFL Draft, it’ll just be the next step in a path that has seemed destined for a while.

The Clemson star headed to college as the nation’s top “pocket-passer” recruit and tied with Justin Fields (plus a pair of defenders) for the top overall grade in ESPN’s 2018 recruiting rankings.

With the Tigers, Lawrence watched incumbent Kelly Bryant start the 1st 4 games in 2018. But the freshman took over in Week 5 and -- despite leaving that contest with an injury -- enjoyed a special debut campaign. Lawrence led Clemson to a national-championship win over Alabama as a true freshman. His 30 TD passes vs. just 4 INTs led to ACC offensive rookie of the year honors and a 2nd-team all-conference nod. Lawrence topped 300 yards passing in 5 of his 11 starts, including totals of 327 and 347 (plus 6 total TD passes) in the 2 playoff victories.

Lawrence carried a 25-game winning streak into Clemson’s title-game loss to LSU in his 2nd season. He also ran a string of 9 consecutive outings with 3+ TD passes in his sophomore campaign and climbed to 9th in the nation in passing efficiency. His 45 total TDs tied Lamar Jackson for 5th-most in ACC history.

In 2020, Lawrence joined Deshaun Watson as the only Tigers to be voted finalists for the Heisman. (Watson did so twice.) Lawrence was also a finalist for the Maxwell Award, Davey O’Brien Award, Manning Award, Johnny Unitas Golden Arm Award and Walter Camp player of the year. The ACC named Lawrence player of the year, despite 2 games he lost to a positive COVID test. Lawrence still ranked 2nd in the conference in TD passes, passing efficiency and passing yards. He led the ACC in completion rate -- even after losing his top 2 receivers from 2019: Tee Higgins landed with the Bengals as a 2nd-round pick in the draft; Justyn Ross missed 2020 after surgery for a congenital spinal condition.

Lawrence opened his career as the 1st freshman QB to earn a 90.0+ grade from Pro Football Focus. He improved on that each of the next 2 years, including a career-best 91.2 as a junior despite a weakened O-line and receiving corps vs. his previous campaigns.

Let’s not waste too much time here. You’ll find a few people who don’t rank Lawrence at the top of this QB class. Chris Simms made waves recently by slotting him behind BYU’s Zach Wilson. Even he started his “reveal” video, though, by saying, “Trevor Lawrence is awesome.”

We’ll get to Wilson another day. Today is about Lawrence. And even if you also prefer Wilson -- or someone else -- there’s nothing to dislike about Lawrence.

PFF graded 97.7th percentile as a deep passer for his career. He can even throw deep without getting his feet set and stepping into it.

He boasts the awareness to exploit opportunities and weaknesses. Check this play against LSU. See how no one else on the offensive line moves when the center snaps it? This was clearly an early snap to get the offside call. It’s also low, coming in at Lawrence’s ankles. The QB not only snags it, but also has the awareness to roll right and the ability to find and connect on the deep shot to take full advantage of the situation.

Lawrence also shows willingness to give his receivers the chance to win contested balls. Lawrence sends such a ball into the end zone here, even while looking through an approaching rusher.

Of course, we’re most interested in fantasy success here. So let’s close out with the rushing.

Lawrence didn’t put up huge numbers on the ground, as you can tell by the rushing yardage above. But he didn’t need to run away from trouble very often. Lawrence took just 43 sacks over 40 career games.

He does, however, show a willingness to run in RPO situations in any game you watch -- including the willingness to throw a shoulder and fight for a 1st down. More importantly, though, Lawrence has the speed to turn a rushing lane into a fantasy boost.

The speed is easy to see when you’re gliding downfield. But being able to beat Power 5 LBs and edge players to the corner shows the find of burst that can turn into Josh Allen upside in NFL red zones.

Sometimes Lawrence’s accuracy can wane. He might throw high at times, especially downfield.

If we were really nitpicking these QBs against each other and selecting 1 to build our NFL franchise around, that might be worth exploring a little deeper.

But we’re not. We’re just looking for guys who will put up fantasy points. Lawrence has proved to be a stud in high school and a stud at the top college level. He has done so with deep passing. He has done so with his legs. He’s not scared to test DBs deep and give his receivers chances to win contested balls. Might that get him into trouble early in the NFL? Possibly. But even that scenario would be the kind of trouble we want in a fantasy QB. That’s Jameis Winston-style trouble (at worst).

Lawrence looks like the surest thing among this year’s strong QB class. Don’t be surprised if he lands in Round 1 range for dynasty rookie drafts even in 1-QB leagues once our rankings drop. And even if you're not looking at him for dynasty, don't be surprised if Lawrence makes a quick fantasy impact.

Last season found rookie Justin Herbert cracking the top 10 among fantasy QBs. Joe Burrow was scoring at a top-14 level before going down in his 10th game. Lawrence's skill package aligns pretty closely with both of those players.

The season before, of course, found both Kyler Murray and Josh Allen ranking among the top 9 as rookies by season's end. And in 2018, Baker Mayfield's 13 starts found him scoring at a top-12 level in fantasy.

Lawrence looks capable of landing in that range right away as well. Top targets at each position for Week 10 FanDuel tournaments.