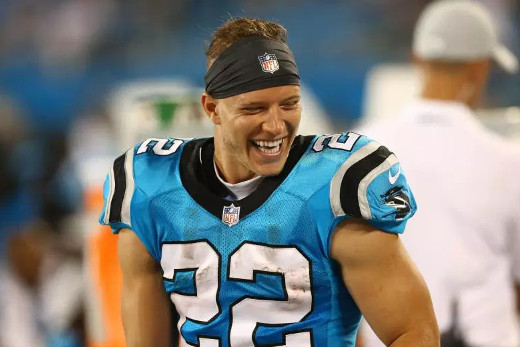 We get to see rookies against NFLers for the 1st time. We get a glimpse at guys returning from injury. (Looking at you, Andrew Luck.) And, most importantly, we find out who’s getting on the field with every team’s 1st-team offense.

We’ve adjusted our rankings throughout the first 3 weeks of the preseason. And if you’re not at least tweaking your thoughts about certain guys, you’re doing it wrong.

With that said, here are the biggest fantasy winners and losers of the preseason:

No one else deserves to lead the list of winners.

After the Panthers talked up a bigger workload for McCaffrey all offseason, they followed through this preseason. In a big way.

McCaffrey played 89% of Carolina’s 1st-team snaps in the first 3 exhibitions. To put that in perspective, Le’Veon Bell led all RBs last year with an 85.3% snap rate. No other RB topped 76.4%. McCaffrey played 70%.

Frankly, we’re hoping the Panthers bring that 89% down a bit this season — or else he’ll be at an elevated injury risk. But it’s clear at this point that he’s going to be on the field more than he was last year. That’s good news for his fantasy production.

Oh — McCaffrey was also super efficient with his touches this preseason, averaging 7.2 yards on 21 carries and 9.1 yards on 8 receptions.

His 69-yard bomb from QB Patrick Mahomes got all the pub. But we’re more encouraged by Hill’s volume this preseason.

Don’t expect him to see over 30% of the targets over the course of the regular season. But it sure looks like Mahomes and Hill have something cookin’. And there’s certainly room for Hill to expand on last year’s 105 targets.

The important thing here is that Luck played, didn’t suffer a setback with that throwing shoulder and looked at least close to the old Andrew Luck.

The old Andrew Luck finished as a top 9 QB in fantasy points per game in each of his first 5 seasons, including a #1 finish in 2014.

Bears HC Matt Nagy spent much of the offseason talking up Tarik Cohen. But he’s also called Howard a complete, 3-down back.

Howard’s usage this preseason was closer to “3-down back” than what we saw over his first 2 years in the league. He played 72% of Chicago’s 1st-team snaps through 3 exhibitions. That’s up from 68.6% and 58.3% snap rates in his first 2 seasons.

It’s also worth noting that Howard and Cohen both played three 3rd-down snaps with the starters this preseason. If that usage continues, Howard should best last year’s 23 catches.

He hasn’t garnered much attention, but Dalton has turned in a strong preseason. He just sliced up the Bills defense for 180 yards and 2 TDs in just 5 possessions in the 3rd exhibition.

Tyler Eifert is healthy for now, John Ross has flashed his big-play ability this preseason and A.J. Green still looks like an elite #1 WR. It all has Dalton looking like a huge value at his 16th-round ADP.

Beyond that, Barber simply looked like the Bucs’ best RB. He ripped off 5.8 yards per carry with 2 TDs on 15 attempts. Jones, meanwhile, wheezed to 18 yards on 18 carries.

The rookie should still be considered a threat to earn a bigger role over the course of the season. And Barber figures to cede passing-down work to Rodgers. But he looks set to open the season as Tampa’s primary ball-carrier.

Goodwin buzzed throughout training camp. And his connection with QB Jimmy Garoppolo was on point this preseason. The duo connected on 7 of 10 targets for 119 yards in 3 exhibitions.

There’s no doubt who Cleveland’s lead back is heading into Week 1. Hyde dominated carries with the 1st-team offense throughout the preseason, while rookie Carlos Hyde played just 1 snap with the starters. And Hyde looked damn good, averaging 6.4 yards per carry.

He’ll lose passing-down work to Duke Johnson. But Hyde will be a fantasy starter to open the season in what should be an improved Browns offense.

Chicago’s starters only got significant run in the 2nd exhibition. In that game, Burton was targeted on 5 of QB Mitchell Trubisky’s 14 passes (35.7%) -- and had a 6th target negated by a penalty. He hauled in 4 balls for 45 yards and a score in 4 series.

Burton played over 90% of Chicago’s 1st-team snaps this preseason and ran nearly half of his routes from the slot. That’s the type of usage we’re looking for in fantasy.

The Jets have played 2 exhibitions with both Powell and Isaiah Crowell. Powell has run ahead of the free-agent addition in both.

In the all-important 3rd preseason game, Powell played all 13 snaps and received all 5 carries on New York’s 1st possession. He finished with 11 opportunities (carries + targets) vs. Crowell’s 6 with the starters.

Powell is set to open the season with a significant ball-carrying role. And he figures to dominate the passing-down work.

Godwin picked up where he left off at the end of last season, racking up 7 catches for 55 yards and 2 scores in 3 exhibitions.

He worked in a 4-man WR rotation with Mike Evans, DeSean Jackson and Adam Humphries. But Godwin might quickly prove too good to take off the field.

Taylor's preseason was a bit of a mixed bag. He didn’t garner nearly as much 1st-team work as we’d like to see. Over the last 2 preseason games, for example, Taylor was on the field for just 8 of QB Marcus Mariota’s 31 snaps (25.8%).

But he was also the most impressive player on Tennessee’s offense. Taylor popped off 113 yards and 2 scores on 6 catches, including this explosive 47-yard catch-and-run TD.

Taylor reportedly played consistently with the 1st-team in training camp, so we’re not overly worried about the wonky preseason usage. This guy should be a top 3 WR in a much-improved Titans passing game.

Dorsett is basically a winner by default, with New England’s WR corps crumbling around him. Hamstring injuries cost Kenny Britt and Jordan Matthews their roster spots, and Eric Decker retired.

With Edelman suspended for the first 4 games, Dorsett is in line for a significant role. He’ll be an intriguing DFS play and a potential flex option in deeper fantasy leagues.

Conner appears ready to be a fantasy factor if Le’Veon Bell misses time this season. The 2nd-year back looks slimmer and more explosive than last year. He averaged 5.3 yards per carry and 8.7 yards per catch in preseason action.

Smith still has some depth-chart climbing to do. He only worked in sparingly with the 1st-team offense this preseason — although it’s worth noting that QB Drew Brees attempted just 9 passes.

But Smith consistently flashed, just like he did throughout training camp. The rookie tallied 11 receptions for 147 yards and a score in 3 exhibition outings. Smith won’t be a fantasy option to open the season, but we’re betting on him becoming a factor by the end of the year.

Even more concerning are Jones’ struggles in the passing game. He dropped 2 of 3 targets (although the other went for a nice 37-yarder down the field).

Jones figures to be a non-factor in the passing game this season and will open the year clearly behind Peyton Barber on early downs.

Chubb played 1 snap with Cleveland’s 1st-team offense this preseason. And the rookie didn’t do much to earn a bigger role. He flashed with a few impressive runs but finished with just 2.8 yards per carry.

Chubb is an upside bench stash — especially with Carlos Hyde’s injury history — but won’t be a fantasy option to open the season.

We thought Crowell was locked in as New York’s lead back after inking a 3-year, $12 million deal in free agency. But preseason action tells us that’s not the case.

Crowell ran behind Bilal Powell in both the 1st and 3rd exhibitions. (He missed the 2nd with a concussion.) In the 3rd, Crowell saw just 6 opportunities (carries + targets) to Powell’s 11.

This will be a backfield to monitor closely when the real games kick off. But Crowell doesn’t look like a fantasy starter to open the season.

Kirk popped a few times this preseason, including this 13-yard TD from QB Josh Rosen in the 2nd game.

But Kirk has run the majority of his routes from the slot. That, of course, remains Larry Fitzgerald’s spot for now.

So it looks like Arizona currently views Kirk as more of a long-term project than 2018 factor. That’s subject to change, but Kirk isn’t worth a roster spot in redraft leagues right now.