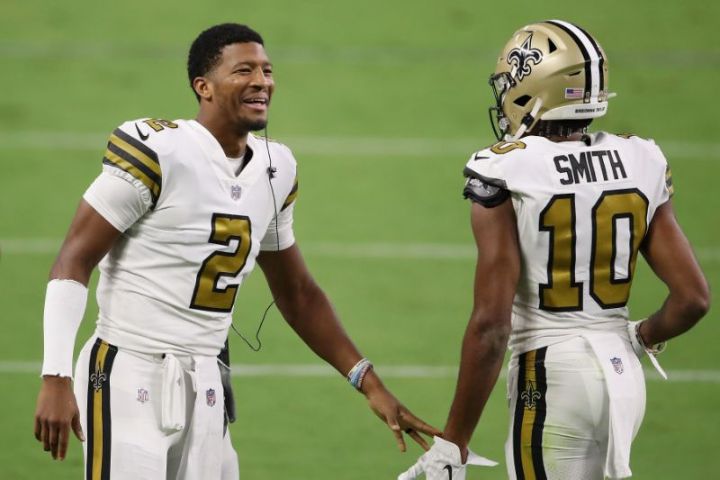 We’ll see about Drew Brees’ rib injury. But if he misses Week 11, Winston will get the keys to an offense with plenty of weapons and a strong play-caller in Sean Payton. The cherry on top: A matchup against Atlanta’s 31st-ranked QB defense.

His reception barrage continued in Sunday’s loss to the Lions. McKissic racked up 7 grabs for 43 yards on a team-high 15 targets. He’s now caught 6+ balls in 5 of his last 6 games and looks like a weekly PPR starter the rest of the way.

Devonta Freeman landed on IR this week, meaning he’ll miss at least 2 more games. Gallman has been producing as New York’s lead back over the last 3 weeks, totaling 165 yards and 4 scores on 44 carries. He gets a Week 11 bye but comes out of it with a great matchup vs. the Bengals.

It was Hines’ turn to lead the Indy backfield on Thursday night. He played 56% of the offensive snaps, took 12 carries for 70 yards and a score and caught 5 of 6 targets for 45 yards and another TD. This was just the 4th time all season that Hines reached double-digit touches in a game, so we’re not ready to trust him as a weekly fantasy starter yet. But it’s certainly possible that his Week 10 performance earns him an expanded role going forward.

Akers missed out on the 3 RB rushing scores the Rams punched in Sunday against the Seahawks. But he led the backfield with 10 carries and 38 yards. And it wasn’t just a matter of loading up late in a win. The rookie led his team in 1st-half rushing attempts. Akers saw no passing-game usage and doesn’t look usable for a Week 11 trip to Tampa Bay. But he’s worth stashing on a roster in case there’s more role growth coming.

He dominated the Dolphins backfield work in Sunday’s win over the Chargers, handling 21 of 23 RB carries and the only RB target. Ahmed turned that into 90 total yards and a score. RB Myles Gaskin is out at least 1 more week with his knee injury, while RB Matt Breida’s Week 11 status is uncertain with his hamstring. Ahmed is probably the favorite for lead duties vs. Denver next week.

He operated as the lead back for the 2nd straight game, taking 18 carries for 68 yards and catching 5 of 6 targets for 34 yards in Sunday’s loss to Miami. Joshua Kelley totaled just 7 touches and Troymaine Pope had 0. RB Justin Jackson seemingly has a shot to return for Week 11, and RB Austin Ekeler will be back at some point. But Ballage is at least worth stashing in most fantasy leagues.

He led the Eagles with 7 targets coming out of the bye week. They produced just 4 receptions for 47 yards, but it’s clear the Eagles want their 1st-round rookie to be a big part of the offense. Reagor gets plus matchups the next 3 weeks vs. Cleveland, Seattle and Green Bay.

We recommended the rookie here last week, but he remains available in 95% of ESPN leagues. Pittman will be tougher to acquire after breaking out for a 7-101 line in Thursday night’s win over the Titans. He led the Colts with 8 targets and even took a carry for 21 yards. Pittman has a beautiful upcoming schedule: vs. Packers, vs. Titans, at Texans, at Raiders, vs. Texans.

As expected, Reed emerged as San Francisco’s lead pass-catching TE in Week 10. His 6 targets, 5 catches and 62 yards all ranked 2nd on the team. As long as he’s healthy, Reed looks like a borderline TE1.

The Miami defense didn’t do anything special in Sunday’s win over the Chargers. But the Dolphins did tally 8 QB hits and an INT after 4 straight usable fantasy weeks. Miami gets an embattled Denver offense in Week 11, a group that presents upside in both sacks and turnovers. The Broncos entered Week 10 as the league’s 2nd most favorable scoring matchup for fantasy defenses. That’s followed by another great matchup vs. the Jets.

He hasn’t been a great fantasy producer this year, but Rivers has averaged 292 passing yards and 1.8 TDs over his last 4 outings. He has a great stretch of matchups on tap: vs. Packers, vs. Titans, at Texans, at Raiders, vs. Texans. It’s enough to make Rivers worth a look as a spot starter in fantasy leagues of 12+ teams.

Seattle expects to get Chris Carson back for Thursday night’s game against the Cardinals. But Collins looks like the handcuff if Carson remains out. He led Seattle RBs in carries (11) and rushing yards (43) and scored the team’s only TD against the Rams. He added a 4-yard catch on 2 targets.

We knew Seattle presented a positive matchup for Reynolds and everyone in the Rams passing game. But we sure wouldn’t have bet on Reynolds leading the Rams in targets (10), receptions (8) and receiving yards (94). That actually marked his 3rd straight game of 8+ targets and 4+ receptions. Reynolds figures to land at least in WR4 territory of our rankings for next Monday night’s matchup with the Bucs.

He was Miami’s most productive receiver Sunday, turning 5 targets into a 4-43-1 receiving line. QB Tua Tagovailoa just missed Grant for a 2nd score. The diminutive speedster will get at least 2 more games in an expanded role after WR Preston Williams landed on IR with his foot injury. None of Miami’s next 3 opponents look scary: Broncos, Jets and Bengals.