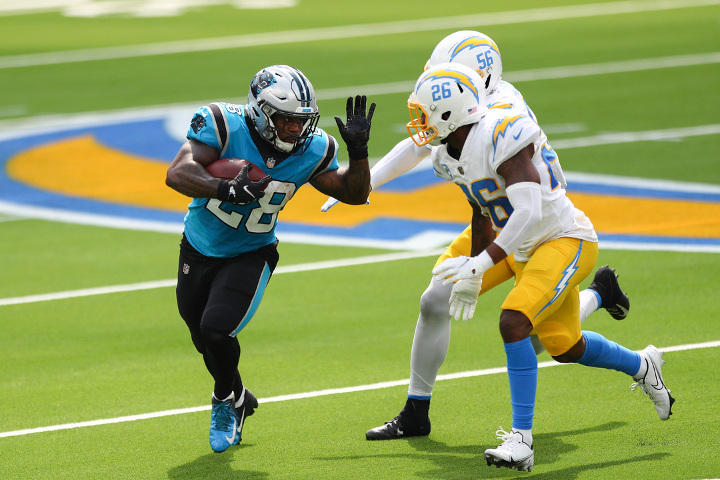 Dak pops up #1 in our $/point metric among main slate QBs. He’s rattled off 38, 29 and 40 fantasy points over his past 3 outings. Dallas’ quick pace, healthy weaponry and matchup with a bad Giants secondary should keep the high-end production coming.

Hunt brings a bit of risk, as he’s still battling a groin injury that’s limited him in practice. Still, with Nick Chubb out, Hunt projects for ~20 touches in a game that should be close. Indy, meanwhile, will be without LB Darius Leonard and perhaps LB Anthony Walker, too.

Panthers-Falcons is simply a game you want pieces of. The total here is at 53.5, up from an open of 51. The Panthers are implied for nearly 26 points.

Atlanta’s decimated on defense — mostly in the secondary. But it provides an excellent scoring matchup for Carolina’s undisputed workhorse. Note that backup Reggie Bonnafon was recently placed on IR. New backups Trenton Cannon and Alex Armah aren’t expected to see more than a few touches.

We’ll see if Raheem Mostert remains out. But if he sits again, McKinnon will deserve strong consideration following a 2-game stretch with 40 opportunities and 2 scores.

The Dolphins lack playmakers on defense and have already allowed 6 total scores to RBs this season.

Ridley stunk last week — he failed to catch any of his 5 targets in a rough matchup at Green Bay. That snapped a streak of 3 straight games of 100+ yards to open this season. He had tallied 7 straight games of 75+ yards going back to 2019.

Ridley played through a variety of lower-body ailments in the Monday night loss and remained on the injury report this week. The good news is, he’s at least put in limited sessions. He’s fully expected to suit up come Sunday.

Atlanta, however, appears likely to be without Julio Jones, who just suffered a hamstring setback. On the other side, Carolina will be without top CB Eli Apple.

In perhaps the best fantasy game on the slate, Ridley should deliver in spades.

Anderson hasn’t been utilized like the deep threat he was with the Jets. Through 4 games, his average depth of target (aDOT) stands at 9.1. The shorter range role — plus an average of nearly 9 targets per game — combine to supply a strong floor and ceiling. That's even truer this week against the league's most injury-riddled secondary.

The Giants’ secondary is easily exploitable, and the Cowboys’ Week 5 team total (31.75) confirms obvious scoring upside. Lamb’s already garnered 2 targets inside the 10 yard-line — 1 of which he converted into a score.

Kittle’s clearly underpriced here; there’s no way he should be $700 cheaper than Travis Kelce.

Now, you’re not playing Kittle because of what he did against Philly (15-183-1). But that certainly demands attention — especially in his first game back from a knee injury.