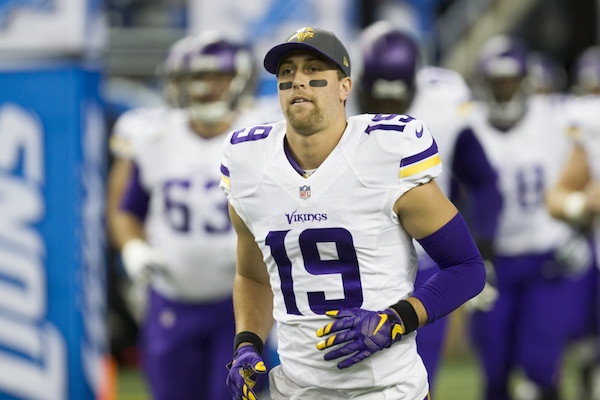 Week 12
Thielen had a great situation against a 49ers defense that’s been below average against the pass. In addition, San Francisco made it a point to frequently double team Justin Jefferson, often leaving Thielen in winnable situations against a single DB. On his 1st TD, he worked the back of the end zone while Kirk Cousins bought time. On the 2nd score, his defender left him too much space and Cousins threw the ball behind Thielen, who made an excellent catch before the ball hit the ground.

He’ll be considered a strong WR2 with upside the rest of the way. He’s posted at least 62 yards in 5 of his last 6 games while seeing at least 7 targets in each contest. He’s also continued his amazing TD totals (he had 14 in 2020), as he already has 10 scores in 11 games this year. In terms of schedule, he doesn’t face a defense in the top 13 against WRs the rest of the way, so he’s a plug and play option.
Week 11
Like his teammate Justin Jefferson, Thielen caught 8 of his 10 targets. He produced 82 yards and a TD on that volume. While the yardage totals are not going to set any records, Thielen continues to find the end zone. He has 8 scores on the season, scoring all but 3 weeks thus far.

Going forward, Thielen should be just fine. While he doesn’t produce the eye-popping yardage totals, his volume and usage in high value areas should continue to vault him the rest of the way. He has seen 7 or more targets in every game but 1 thus far. He should provide a safe floor and decent upside the weeks he finds pay dirt.
Week 10
Although he was facing one of the better pass defenses in the league, Thielen was targeted 7 times, and he was getting consistently open underneath the defense, which allowed him to post solid yardage. Even though he’s often heavily targeted in the red zone, the 2 TD passes that Kirk Cousins threw both came from inside the 3-yard line, but they both went to TE Tyler Conklin. The lack of a score resulted in a 3-game scoring streak for Thielen being put to an end.

As long as he keeps up his red-zone success, which dates back to last year, his ability to score TDs will boost his fantasy value. He came into this game having scored in 6 of his last 8 games, Otherwise, he’s posted 3 or fewer catches in 3 of his last 5 games with 50 or fewer yards in 5 of his last 7 contests. So if he doesn’t score, he could have significant downside. He also will face 4 of the top-10 defenses against WRs the rest of the way, which could lower his scoring potential.
Week 9
Thielen tied for the team target lead with 7 in the OT loss to Baltimore, but he managed only 2 receptions on a much more limited day for the Minnesota offense than the 31 points would suggest. Fortunately, 1 of those 2 catches produced a 1-yard TD, keeping Thielen’s day from being a total bust.

It was Thielen’s 3rd straight game with a TD and 6th such game among 8 outings this year. It also marked just the 3rd time among those 8 contests that he has fallen short of 6 receptions. So try not to fret.
Week 8
It was typical Thielen at his best on Minnesota’s opening drive when he was able to make Dallas CB Trevon Diggs break away from covering him, enabling Thielen to catch a short pass and run for a 20-yard TD. That was the highlight of the Sunday night game for him and his team. Thielen caught 6 of 9 targets for 78 yards and his 6th TD this season.
After Sunday’s game, Thielen spoke critically about the Vikings’ inability to put opponents away, allowing them to hang around long enough to beat Minnesota. For the team, it doesn’t look good going forward against the Ravens, Chargers and Packers. Thielen has done his part – scoring a TD in all but 2 games. He’s close to last season’s pace when he scored 14 TDs. Thielen is also good in PPR formats; he has at least 6 catches in 5 of his 7 games this season.
Week 6
Thielen caught 11 of 13 targets for 126 yards and 1 TD in Minnesota's Week 6 overtime win against the Panthers.
Thielen had an excellent game with his first 100-yard game of the season and first since Week 11 of 2020. It was promising to see Thielen with a big yardage performance as he has always been a stud in the red zone with yet another TD in the 1st quarter in a contested catch situation.
The Vikings go on bye in Week 7 and Thielen should be a nice WR2 in Week 8 and beyond.
Week 5
Going into the latter part of the 4th quarter, Thielen had exactly zero catches, but after the Vikings blew the lead they held for the entire game with just a few minutes left, the WR was able to get onto the stat sheet. The 2 catches he had late in the game moved him to a respectable 40 yards, but the 3 targets he saw were extremely disappointing. The Vikings were clearly trying to win with defense and their running game, and aside from Justin Jefferson, no other WR was a focal point, including Thielen.

Although Thielen hasn't exceeded 50 yards in any of his last 4 games, this was the first time he was targeted fewer than 7 times all season, so there’s no need to hit the panic button. The yardage downturn had already started for him last year, so that shouldn’t be a surprise, but his red zone usage, which provided much of his fantasy value last year, has mostly remained with him scoring 4 times in 5 games. There’s certainly still upside, as evidenced by his 9-92-2 TD stat line in Week 1. Just be prepared for the floor weeks when he’ll often be a WR3.
Week 4
Thielen took a backseat this week to Justin Jefferson as he only caught 3 balls for 46 yards. Thielen didn’t get his usual red zone work as those targets went to Jefferson. Prior to Week 4 Thielen had 4 TDs in the first 3 games while converting 6 red zone looks into 4 TDs. That pace isn’t going to be sustainable, but the combination of a tough opponent and no red zone looks won’t happen often.
This week Thielen looks to bounce back vs. a Lions D that he has struggled to produce against over the past few seasons. In 2020 Thielen failed to hit double digit fantasy points in either game vs. Detroit. Granted this is a new coaching staff for the Lions, but it is something to consider when playing Thielen in Week 5.
Week 1
Hey, did you know Thielen likes to score TDs?

Last year’s #3 in scoring catches was back at it with a pair of end-zone trips at Cincinnati. First came a 5-yard TD in the 2nd quarter. Then Thielen took a short 4th-and-4 pass into the end zone from 24 yards out late in the 3rd.

Overall, he drew a game-high 10 targets -- 20.4% of Kirk Cousins’ 49 pass attempts for the game. That total is obviously coming down, but expect Thielen’s target share to remain in the low 20s.

Thielen’s on the wrong side of 30 for an NFL player, but he showed no clear signs of decline in 2020. He did watch Justin Jefferson overtake him as the Vikings’ top target, but there’s enough left to feed Thielen at a fantasy-starter level.

Expect some regression from his TD total after the veteran got fortunate in the red zone -- and especially on end-zone looks -- but all of that appears baked into his current WR22 ADP. That’s right in the range where we have him projected.

Thielen out for regular season after ankle surgery

Vikings WR Adam Thielen will miss at least the rest of the regular season after undergoing ankle surgery on Tuesday, according to The Athletic's Chad Graff. NFL Network's Tom Pelissero adds that Thielen is expected to be sidelined for about a month, so Minnesota would need to make a deep playoff run if Thielen is going to play again before the 2022 season. K.J. Osborn will step in as the Vikings' #2 WR -- and WR Justin Jefferson will dominate targets -- for as long as Thielen is out.

Vikings WR Adam Thielen left in the 1st half of Sunday's game against the Rams with a left-ankle injury. The team calls him questionable to return. Thielen missed the past 2 games with a high left ankle sprain, and his reaction to today's injury sure made it look like an aggravation of the existing issue. We'll see whether he can make it back -- and then see about his availability for Week 17.

Update: Thielen returned for the start of the 2nd half. We'll see how that ankle holds up.

Vikings WR Adam Thielen (ankle) is active for today’s game vs. the Rams. He’s 3 weeks removed from a high-ankle sprain and was limited in practice all week. Thielen’s fantasy floor is lower than usual today.

Vikings WR Adam Thielen (ankle) is expected to play vs. the Rams today, according to ESPN's Adam Schefter. Thielen was left off the final injury report on the Vikings' website, but he's evidently actually listed as questionable. Regardless, it sounds like he'll be available for Week 16 fantasy lineups. Thielen was limited in practice all week coming off the December 5 high-ankle sprain, so he brings a lower floor than usual.

Vikings WR Adam Thielen (ankle) was limited in practice all week but isn’t listed on the final injury report. He’ll return for Sunday’s game vs. the Rams after missing the past 2. Thielen carries elevated risk in his 1st game back from a high-ankle sprain, but there’s plenty of upside here in a potential shootout.