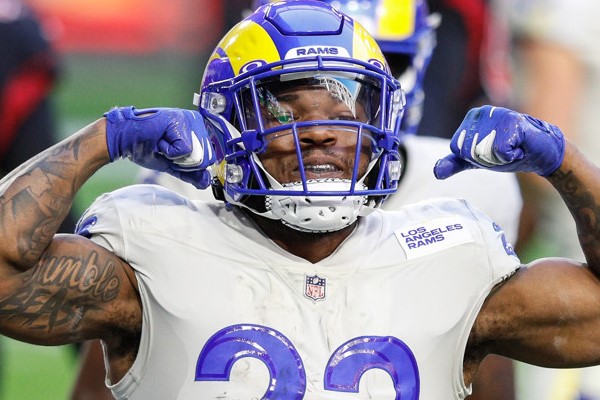 Akers closed last season in a workhorse role, averaging 22 carries over his last 6 games. That, the departure of Malcolm Brown and HC Sean McVay’s history of producing successful running games gives Akers upside into the top 5 RBs this season.

He’s riskier than most of the other guys he’ll go around in fantasy drafts this summer, though. He only saw extensive action in those 6 games last year, was never heavily involved in the passing game and was actually out-played by Darrell Henderson according to most advanced rushing metrics.

We recommend passing on Akers in Round 1 -- but his upside might be worth taking a shot on if he’s available in the 2nd.

NFL Network's Tom Pelissero reports that Rams RB Cam Akers suffered a torn Achilles' tendon while training. That should obviously mean the end of his season, less than 2 months ahead of the opener. It clears a path for Darrell Henderson to lead a backfield that let Malcolm Brown walk in free agency. Behind Henderson on the current depth chart sit Xavier Jones, Raymond Calais and rookies Jake Funk and Otis Anderson. We'd bet on L.A. adding to that group via a trade or the pool of cut players as teams whittle their rosters this summer. Regardless of upcoming moves, Henderson should be in for a large workload and could remain a nice temporary value in best-ball drafts as fantasy football players digest the news and reset his ADP.

Akers ready for more in the passing game

Rams HC Sean McVay believes RB Cam Akers is capable of taking on more in the passing game this season. “He’s obviously a great runner, but he’s got ability as a pass-catcher coming from the backfield, and we can displace him and put him in the slot or the outside receiver location,” McVay said. “There’s not any limitations, but we’ll see how it comes to life.” This jibes with beat writer Jourdan Rodrigue saying last month that Akers is in for a bigger pass-catching role this season. His ultimate upside is what RB Todd Gurley did in McVay's first 2 seasons with the Rams: average 18.4 carries and 5.8 targets per game. A workload in that vicinity would likely make Akers a top-5 fantasy back.

Rams insider Jourdan Rodrigue expects more passing-game work for RB Cam Akers this season. He totaled just 14 targets as a rookie last year, losing a bunch of passing-down snaps to RB Malcolm Brown. But Brown is gone now, and Rodrigue believes QB Matt Stafford's ability to diagnose blitzes and maneuver in the pocket will make pass protection less of a priority for Rams backs this season. Akers caught 69 balls across 3 college seasons and certainly seems capable of making an impact in that department in 2021 and beyond.

Rams HC Sean McVay called Cam Akers a "3-down back" and a "very special player" on Thursday. The Rams already proved willing to give Akers a big workload on the ground last year, handing it to him 18+ times in 5 of their last 6 games. He totaled just 14 targets over that span, but it sounds like he's in for an increased role in the passing game. Akers looks like a RB1 heading into 2021 fantasy drafts.

Rams RBs Cam Akers (ankle) is active for today’s game against the Cardinals. He got in just 1 limited practice this week after suffering a high-ankle sprain 14 days ago. Akers figures to be operating at far less than 100% today and is a risky fantasy play. His presence, though, also makes RB Malcolm Brown a shaky option.