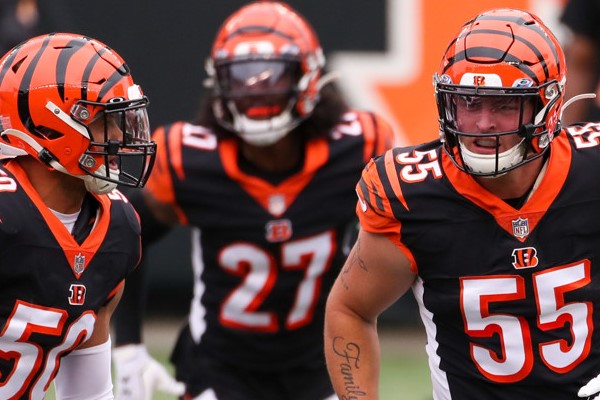 Weekly numbers will be released Tuesday at 12pm

Bengals starting DEs Carlos Dunlap and Sam Hubbard were both removed from the week's final injury report. Dunlap (hamstring) and Hubbard (ankle) each missed practice Thursday and put in limited participation Thursday. But each guy returned to a full practice Saturday. Use them as you normally would in IDP lineups. Cincinnati will miss OLB/DE Carl Lawson, who is doubtful with a hamstring injury.

The Bengals have ruled LBs Vontaze Burfict (hip) and Nick Vigil (knee) out for Sunday's game against the Saints. That makes a weak run defense even weaker and adds IDP upside to LBs Jordan Evans and Preston Brown.

The Bengals spent 3rd-round NFL Draft picks on Texas LB Malik Jefferson and Ohio State DE Sam Hubbard in Round 3 of the NFL Draft. Jefferson delivered 110 tackles as a 2017 junior, including 10 tackles for loss. He also tallied 13 career sacks after arriving as a top recruit. HC Marvin Lewis said he believes Jefferson can play all 3 LB spots, according to Paul Dehner of the Cincinnati Enquirer. Jefferson could compete for the middle or strong-side jobs soon, or fill in early for once-again-suspended Vontaze Burfict on the weak side. Hubbard, meanwhile, tallied 17 sacks across 3 college seasons and posted 13.5 total tackles for loss in 2017. He'll join a solid DE rotation in Cincinnati.

Bengals DT Geno Atkins (toe), CB Darqueze Dennard (knee) and LB Vincent Rey (hamstring) are all active for today's game against the Bears after entering the weekend questionable. All look fine to use as you normally would in your IDP lineup. Dennard should be a better bet than usual for full-time snaps with CBs Dre Kirkpatrick and Adam Jones out. Rey should see starter-level playing time with LBs Nick Vigil (on IR) and Vontaze Burfict out.

Bengals DT Geno Atkins (toe), CB Darqueze Dennard (knee) and LB Vincent Rey (hamstring) are questionable for Sunday's game against the Bears. HC Marvin Lewis said Friday that he expects Atkins to play, and the star pass rusher will be worth a spot in IDP lineups for Week 14. Rey will be an upside tackle option with Nick Vigil on IR and Vontaze Burfict out with a concussion. Dennard's not worth the risk in an unexciting fantasy matchup.