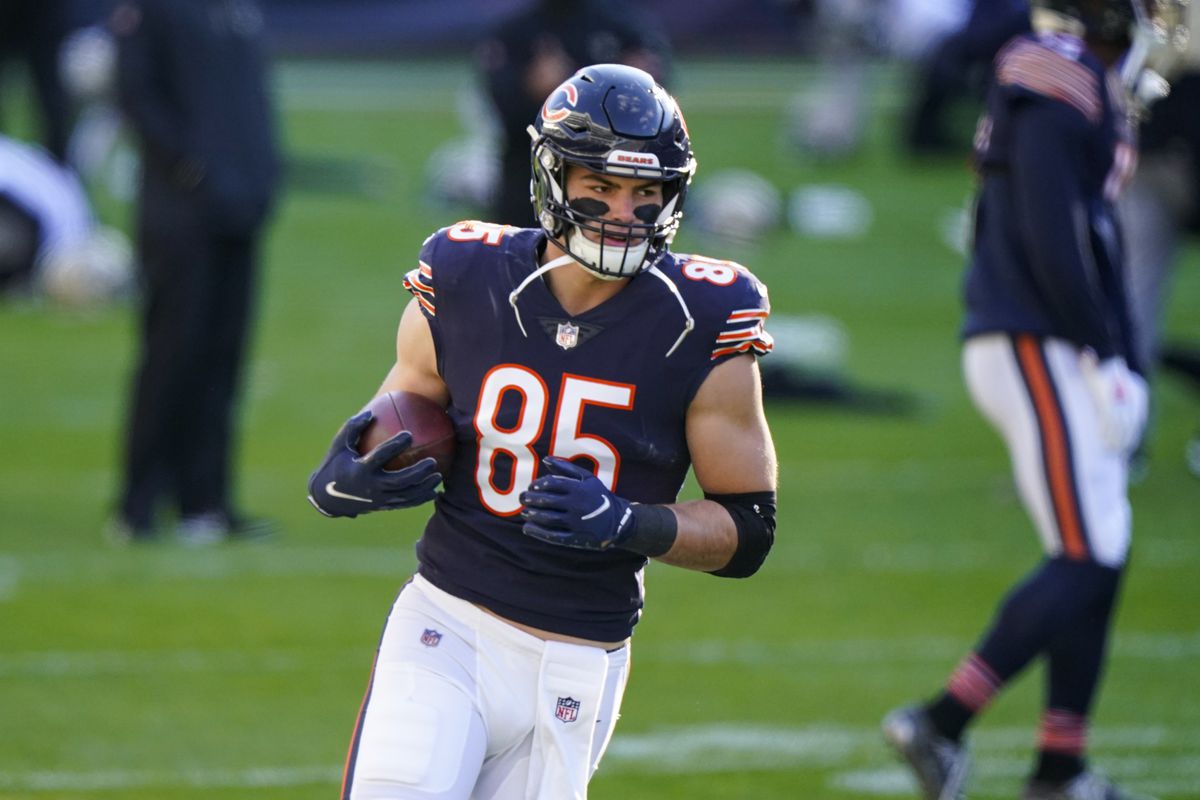 The case for Kmet is clear:

He’s a full-time starter in an offense lacking WR talent. QB Justin Fields supplies a high upside, and a new coaching staff looks like an upgrade on Matt Nagy.

The jury’s still out on whether or not Kmet is good enough to post a true breakout season. But with a June ADP at TE19, he’s a logical late-round target for the opportunity alone.

Bears QB Justin Fields logged just 17 pass attempts in Sunday's 23-20 win over the Texans, completing 8 for 106 yards, 0 INTs and 2 INTs. Through 3 weeks, Chicago has 10 fewer pass attempts than any other team in the league, with the next lowest being a Giants offense that has yet to play in Week 3. WR Darnell Mooney (6 targets) and TE Cole Kmet (3) assumed their expected positions as Chicago's target leaders, but the shares won't matter until the Bears begrudgingly throw the ball more. Each guy caught just 2 balls vs. Houston.

Bears TE Cole Kmet failed to record a catch in a Week 2 loss at Green Bay. His lone target was dropped. That means that through 2 weeks, the young TE has a grand total of 2 targets…for 0 yards. He’s also outside the top-30 TEs in routes run (31). In theory, opportunities should come in a thin Bears passing game that'll likely continue playing from behind. But we’d have to see some signs of life from Kmet before considering him anything close to a TE streamer. He gets Houston at home in Week 3.

Mooney, Kmet suffer under the weather

The rain was no joke in Chicago on Sunday, helping produce sub-50% completion rates for both the Bears and 49ers. QB Justin Fields attempted just 17 passes for the game, completing 8 for 121 yards and 2 TDs. Unfortunately for anyone who started WR Darnell Mooney or TE Cole Kmet, those scores went to WRs Dante Pettis and Equanimous St. Brown. RB David Montgomery led the team with 4 targets. Mooney tied for 2nd with just 3 looks, catching 1 for 8 yards. Kmet garnered just 1 target, which fell incomplete. Each guy did, at least, easily lead his position in Week 1 playing time. We're not altering our fantasy football outlooks for Mooney or Kmet based on the opener.

Chicago has been hit with heavy rains this morning. It looks like the worst of it will be gone by kickoff of 49ers-Bears, but there will be lingering showers -- and a wet field. The forecast also calls for 15-20 mph winds. Less than ideal scoring conditions, although this looked like a low-scoring game anyways. Expect lots of running from both teams.

Kmet ready for a breakout?

The Athletic’s Adam Jahns considers Bears TE Cole Kmet the team’s #2 option in the passing game. No surprise there, but per Jahns, Kmet has earned the “trust” of Justin Fields and OC Luke Getsy. The young TE snagged 2 of 3 targets from Fields for 31 yards in Thursday night’s preseason game, carrying over what's been a strong training camp showing. There’s clear TE1 potential here.

2022 is a pivotal year for Kmet, who’s yet to post anything close to a breakout. A new coaching staff and a full year alongside Justin Fields supply some hope. Kmet is only 23.