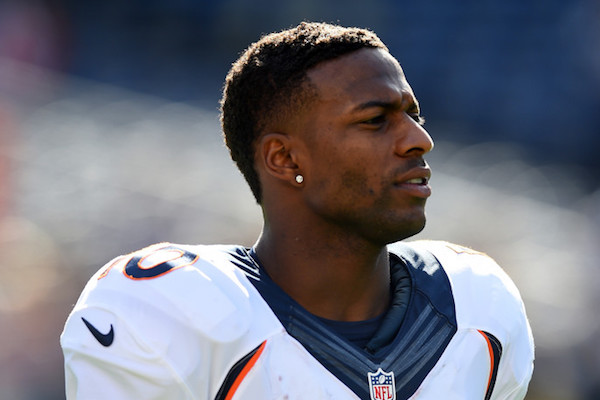 Week 8
Chalk up Sanders’ goose egg as awful luck. Josh Allen misfired on 3 deep balls to Sanders, including 2 that could have gone for scores. Sanders also had 2 shorter-range catches wiped out by penalties. Look for him to rebound in Sunday’s cupcake matchup with Jacksonville.
Week 6
Sanders has quickly become one of Josh Allen’s favorite options in the passing game for this explosive Bills offense. Sanders led the team in receiving yards in this one and could have had a bigger night, Allen missed him wide open for a TD in the 1st quarter. This passing game is not lacking for playmakers, and Sanders has been a huge addition for the already explosive Bills offense. Allen continues to look for Sanders down the field, he finished 3rd in the league in total air yards in Week 6 with 177. He finished the game with 5 catches (on 8 targets) for 91 yards.
Sanders has had a solid season, totaling 313 yards and 4 TDs over the last 4 weeks. Sanders has become one of Josh Allen’s favorite targets in the high-octane Bills offense that leans on the passing game every week. The Bills have a bye in Week 7. After the bye week, the Bills get a Dolphins secondary that has allowed over 580 receiving yards to WR and 5 TDs to WRs in the last 2 weeks. The next 3 games on the schedule following the bye week are MIA, @JAX, and @NYJ. Sanders is our WR35 for the rest of the season.
Week 5
Sanders caught 3 of 5 targets for 54 yards and 2 TDs in the Bills' Week 5 win over the Chiefs.
Sanders has now had a couple games with multiple TDs and is emerging as the Bills 2nd option behind stud WR Stefon Diggs.
Josh Allen is playing at an MVP level, which is keeping Sanders in the mix as a WR3/WR4. The Bills have a great matchup in Week 6 on the road against the Titans.
Week 4
In a game in which Josh Allen threw just 29 passes in a blowout win, and Stefon Diggs and Dawson Knox saw 18 of those targets, Sanders was 3rd on the team with 6 targets, which is the same number he’s seen in each of the last 3 games. Although he didn’t find the end zone, he continued to be a reliable option for Allen in the intermediate area of the field, and his 74 yards continued his season-long streak of posting at least 48 yards in each game.

It’s clear that when the Bills’ organization said Sanders was their main target in the offseason, they had his current role in mind. Knowing that Josh Allen works best in the intermediate area of the field, Sanders will remain a perfect complement to that strength. And also knowing that the Bills are prone to throw the ball often, Sanders should maintain a strong weekly scoring floor. He’s now been targeted at least 6 times in each game, and he can safely be started each week as a WR3 with a solid floor.
Week 3
Sanders was a fantasy monster against Washington. He caught 5 of his 6 targets for 94 yards and 2 TDs. This production shouldn't come as a shock to those paying attention. Sanders has seen 6+ targets in each of Buffalo’s first 3 games.

This kind of volume in a passing offense many were excited about coming into the season is a great sign going forward. While Stefon Diggs is the featured WR, the opportunity on the other side of the field is there. Many thought Gabriel Davis might take this role heading into year 2, but Sanders has locked it up.

Will Sanders have more 2-TD performances the rest of the season? Not likely, but he should be a compelling flex play most weeks, especially when the matchup is right.

Sanders, now on his 4th team since 2018, is clearly nearing the end of his career. The 34-year-old is coming off his 2nd lowest yardage total since 2012. His 2.7 YAC per reception marked the worst tally of his career.

A relatively healthy 2020, a pass-first Buffalo offense and a match with uber-aggressive Josh Allen supply the upside. Yet in an offense with Stefon Diggs, Cole Beasley and Gabriel Davis, there’s simply not a huge piece of the target pie for the taking. While spot start value is reasonable, don’t expect a major resurgence this fall.

Bills WR Emmanuel Sanders (knee) put in a full week of practice and isn't listed on the final injury report for Saturday night's Wild Card game vs. the Patriots. A healthy Sanders has played ahead of WR Gabriel Davis all season, but we're not sure that'll remain the case this weekend. Both Sanders and Davis are shaky fantasy bets in what figures to be a lower-scoring game in near-zero temps.

Bills WR Emmanuel Sanders (knee) put in a full practice on Tuesday. That puts him on track to return for Saturday night's Wild Card game vs. the Patriots. The question now is whether he'll get his starting job back from WR Gabriel Davis, who definitely provides more pop at this point. We'd avoid Sanders in fantasy lineups this week -- but his return does add risk to Davis' outlook.

Bills WR Emmanuel Sanders (knee) is inactive for today’s game vs. the Jets. WR Gabriel Davis gets another start.

Bills WR Emmanuel Sanders (knee) didn’t practice all week and is listed as doubtful for Sunday’s game vs. the Jets. WR Gabriel Davis will get another start for Buffalo and is a high-upside WR3 in fantasy lineups.

Bills WR Emmanuel Sanders (knee) did not practice on Wednesday. If he's unable to play vs. the Jets this weekend, Gabriel Davis would again be a high-upside WR3.