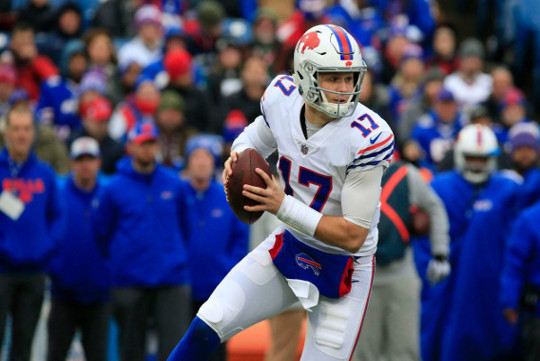 Only 26, Allen’s just entering his prime in year 5 as the starter.

We have no concerns about this offense on the field; the key is simply smoothing out the transition from OC Brian Daboll to first-time play-caller Ken Dorsey. And we don’t foresee a rocky road there. (Allen, in fact, requested that Dorsey earn the promotion.)

Allen’s the superflex 1.01 and easily our top projected QB going into the season.

Bills QB Josh Allen completed 25 of 42 passes for 265 yards and 1 INT in Sunday’s loss vs. Cincinnati. His pick came late in the 4th with the game already wrapped up. The Bengals mustered only 1 sack, but steady pressure — and snowy conditions — made life tough for Allen. Allen did pop in a rushing score, his 8th of the season. Buffalo should now shift its focus to upgrading the pass catchers and the OL.

Bills QB Josh Allen put up a monster 352-3-2 passing line in a Wild Card win over Miami. We wouldn’t put either INT on Allen, although he was to blame for a lost fumble in the pocket. Credit Miami for only allowing 20 rushing yards on 4 Allen runs. As a passer, though, Allen’s rare arm talent showed up in several key spots. His scores went to Gabe Davis, Cole Beasley and Dawson Knox. Allen will likely face the Bengals — at home — next weekend.

Bills-Chiefs AFC Championship would be in Atlanta

The NFL announced that a neutral-site Bills vs. Chiefs AFC Championship game would be held at Mercedes-Benz Stadium in Atlanta. Yes ... that'd be Josh Allen vs. Patrick Mahomes in a dome to go to the Super Bowl. Bills-Chiefs produced 62 points in the playoffs 2 years ago and 78 points last year -- with both games coming outside at Arrowhead Stadium.

Allen all set for Week 18

Bills QB Josh Allen (ankle, right elbow) upgraded to full practice again on Friday and doesn't carry an injury designation ahead of Week 18 vs. the Patriots. With AFC playoff seeding still being a factor in this game, it stands to reason that Allen and all other key starters will play the full compliment of snaps. Fire up Allen as a no-doubt QB1, per usual.

Allen continued to perform as an elite QB in 2022. 2023 turns up his 6th pro season and questions only surrounding the quality of his supporting cast (beyond WR Stefon Diggs, of course). The 26-year-old is under contract through the 2028 season.