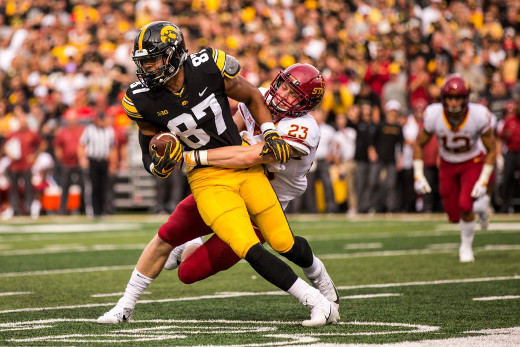 Week 14
Fant caught all 4 of his targets for 51 yards in the Broncos' Week 14 win over the Lions.
Fant led the Broncos in receiving yards, including an over-the-shoulder 32-yard grab in the 1st quarter.
The Broncos pass attack was mostly held in check as the Broncos rushing attack and defense dominated a hapless Lions team.
Fant has been up and down most of the season and is a possible top 15 TE play at a weak position in Week 15 against the Bengals.
Week 12
Fant disappointed fantasy managers in Week 12, but it’s not really his fault. The TE garnered just 4 targets, which tied Javonte Williams for the team led. Denver totaled only 25 pass attempts and 15 completions for the game.

Fant caught 3 of them, mustering merely 12 yards. The only “target” that traveled more than 7 yards downfield sailed well over Fant’s head (when he was well covered anyway).

It was the 2nd time in 3 games that Fant saw only 4 targets, with the other producing 2 catches for 8 yards against Washington. In between came a solid 5-59 receiving line on 6 targets in a positive matchup for TE scoring against Philly.

Fant gets another positive scoring matchup in Week 13 at Kansas City. According to Ryan McDowell of Dynasty League Football, only the Eagles have allowed more TE1 PPR performances this season. Fant’s situation keeps him from being a strong play there, but he’s a solid PPR option.

Neutral matchups with Detroit and Cincinnati sit beyond that, with upside visits to the Raiders and Chargers closing out the fantasy season (unless you play through Week 18).
Week 9
We didn’t see anything from Fant at Dallas because he was on the NFL’s reserve/COVID-19 list. TEs Albert Okwuegbunam and Eric Saubert played in Fant’s place.
HC Vic Fangio said on Monday that Fant was close to clearing the COVID-19 protocols to return to practice. If he plays against the Eagles, there will be more opportunity for Fant because of a knee injury to Okwuegbunam. If the Broncos continue to start 2 TEs, Saubert (1 target caught for 6 yards at Dallas) most likely would be the 2nd TE but not a viable fantasy performer.
Week 8
TE Albert Okwuegbunam returned from IR this week and out-produced Fant, posting a 3-34 line to Fant’s 2-8. Fant out-targeted Albert O just 4 to 3.

It’s a concern for Fant moving forward. In the 4 games Okwuegbunam missed all or most of this season, Fant has posted an 84.6% route rate and averaged 8.0 targets per game. In 4 games with Okwuegbunam, those numbers sink to 68.5% of the routes and 5.3 targets.

We’ll continue to monitor Fant’s usage, but he looks like a low-end TE1 with Albert O back in the picture.
Week 7
It was a disappointing night for the Broncos passing game at Cleveland. Teddy Bridgewater was unable to push the ball down the field and had to resort to mostly a dink-and-dunk approach.

The positive news is Fant was able to tie Javonte Williams for the team lead in targets, with 7. Unfortunately, Fant was only able to gain 39 yards on 5 catches.

Fant is our TE4 for Week 8 against Washington, which has surrendered 220 yards and a TD to opposing TEs over the last 2 weeks. Fant has received 32 targets over the last four weeks and is one of the more reliable options for Bridgewater.
Week 6
Fant caught 9 of 11 targets for 97 yards and 1 TD in Denver's Week 6 blowout loss to Las Vegas.
Fant ended up having a fantastic fantasy game mostly as a result of the Broncos falling behind big and benefiting from nearly 50 Teddy Bridgewater pass attempts.
Fant scored his TD late in the 4th quarter and was 2nd on the team in targets, only behind Courtland Sutton.
Fant should be used as a TE1 going forward. The Broncos play the Browns on Thursday Night Football in Week 7.
Week 5
What happened with Fant in Pittsburgh? Nothing crazy. He just didn’t get the ball much.

Denver went 70.7% pass in a game they trailed throughout. Teddy Bridgewater attempted 38 passes. But Fant saw a target on just 4 of them.

He played a season-high 97% of offensive snaps and spent just 3 of his 41 pass-play snaps as a blocker. We can probably chalk his quiet fantasy day primarily up to bad luck. It’s worth noting, though, that Pittsburgh’s best DVOA rating in coverage vs. any position so far comes against TE. Football Outsiders ranks the Steelers 13th in that category.

Keep Fant in your starting plans for Week 6 against a Raiders defense that ranks 25th in TE-coverage DVOA.
Week 4
Fant led the team in targets in Week 4 with 10, catching 6 for 46 yards and a TD. While the TD came from Teddy Bridgewater, it was Drew Lock who leaned on the TE, targeting him 6 times after taking over.

In this game, Fant saw the most targets and receptions of the entire season. He also separated himself from Albert Okwuegbunam, who has continued to see his targets drop off. Drew Lock should continue to lean on Fant for as long as he starts.

Going forward, Fant is a solid fantasy TE but has yet to flash the elite upside many thought he could have this season. Maybe Drew Lock unlocks that with the volume, but we will have to wait and see.
Week 3
Fant caught 2 of his 3 targets on Sunday for 15 yards. Like most of the Denver offense, the production was simply not there in this matchup. Fant had seen 14 targets through the first two weeks. But with passing not being a priority in this contest, the targets simply were not there.

Going forward, Fant should be just fine. He has vaulted to the 2nd most important target in this offense behind Courtland Sutton with the injuries out wide. TE Albert Okwuegbunam continues to see enough work to be annoying, but nothing that should cause Fant issue long term.

There is little reason to doubt Fant the rest of the way. He should be one of the safest and most reliable TE options after the big names the rest of the season.
Week 2
Even though the Broncos led for most of this contest, the team still had Teddy Bridgewater throw the ball 34 times. Unfortunately for Fant, Courtland Sutton saw 12 of those passes. 10 passes were thrown to the TE position, but Albert Ogwuebunam saw 4 of those looks. As a result, Fant caught just 4 passes, none of which resulted in him finding the space to generate big yardage after the catch. Despite the moderate yardage total, he was able to haul in a TD to salvage his fantasy day.
For Fant to reach the ceiling that his elite talent should allow, he’ll need the team to throw a bit more than they have through 2 games. The good news is that they won’t likely play all of their games with a lead, which will likely force them to have a decent number of games where Fant can have games like Week 1 when he was targeted 8 times with some of those passes being downfield. He’ll also likely see a target squeeze when Jerry Jeudy returns from his ankle injury.
Week 1
Fant led the Broncos in targets with 8 and finished the day with 6 receptions for 62 yards. It seemed every time QB Teddy Bridgewater needed to make a play he was looking for big #87 or WR Jerry Jeudy. With Jeudy now hurt, expect Fant’s volume to grow.
Fant did a nice job as Teddy’s release valve, but he wasn’t able to showcase much of his athleticism in the open field. He also was sniped by TE Albert Okwuegbunam for a red zone score that crippled the Giants’ chances. Fant should be able to build on the productive week with another plus matchup in Jacksonville.

Fant was better last year than his final fantasy ranking suggests. An injury, illness and game without a legitimate QB tripped him up. But outside of those outings, he finished TE5 in PPR points and TE10 in non-PPR. That followed a strong rookie season.

Fant faces tough target competition, most notably from WRs Courtland Sutton and Jerry Jeudy. And QB play remains a question mark. But the 23-year-old Fant is an ascending player with an exciting ceiling.

If you miss out on the top tier of TEs, he’s a nice target in the middle rounds of your fantasy draft.

Broncos TE Noah Fant has been activated from the COVID-19 list. The 24-year-old sat out last Sunday's win over Dallas. Back healthy, he profiles as a low-end TE1 this week vs. Philadelphia.

Fant not expected to play Week 9

Broncos TE Noah Fant remains on the COVID list as of Friday afternoon. HC Vic Fangio confirmed that he doesn't expect Fant to be available for this weekend's game vs. the Cowboys. That'll leave Albert Okwuegbunam as Denver's lead TE -- and a viable Week 9 fantasy spot starter.

The Broncos have placed TE Noah Fant on the COVID list. ESPN's Field Yates reports that Fant tested positive. If he's vaccinated, Fant would have a shot at returning for Sunday's game with 2 negative tests 24 hours apart. For now, we'd bet on him not being available Sunday against the Cowboys. That would elevate Albert Okwuegbunam to the top receiving role among Denver TEs.

Broncos TE Noah Fant (leg) isn’t listed on the final Week 1 injury report after putting in full practices on Thursday and Friday. He should be full-go for this weekend’s opener vs. the Giants.

Broncos TE Noah Fant (leg) progressed to a full practice on Thursday. He's ready to go for this weekend's opener vs. the Giants.