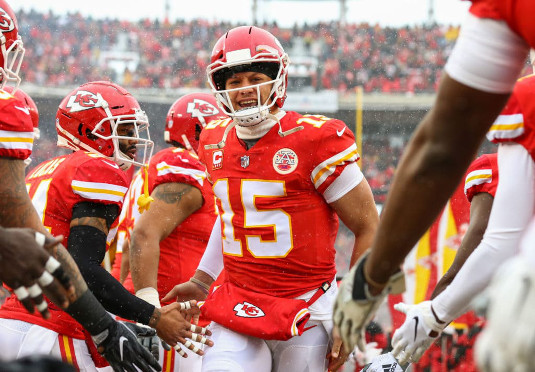 Mahomes comes off his worst outing of the season to face the best matchup he possibly could. Washington ranks #2 in our adjusted fantasy points allowed to QBs, trailing only the Chiefs.

Week 5
Mahomes completed 33 of 54 passes for 272 yards, 2 TDs and 2 INTs in the Chiefs' Week 5 loss to the Bills. He added 8 carries for 61 yards.
Mahomes had been phenomenal all season long until this game which was by far his worst of the year.
Mahomes made a few questionable decisions that led to turnovers and struggled with efficiency against the Bills’ cover 2 defense. He had 21 incompletions.
The Chiefs had a few drops which didn’t help Mahomes, but he had another costly red-zone turnover as they were trying to mount a comeback.
Mahomes is a top 3 QB play every week and should bounce right back in Week 6 against the Washington defense.
Week 4
Mahomes is awesome. Obviously. But he also got a little lucky this week. Two of his 5 TD passes against the Eagles came on short-range shovel passes: first to Clyde Edwards-Helaire, and then to TE Joe Fortson.

The other 3 went to Tyreek Hill, who bounced back from a couple of down volume weeks for an 11-186-3 receiving line on 12 targets. Not much luck involved there (other than being fortunate to have a WR with Hill’s talent).

It’s worth noting that Mahomes now sits on a 9.9% TD rate this season, higher even than the 8.6% rate he led the league with in his breakout 50-TD campaign. That leaves room for regression.

Of course, that’s no cause for concern. Just a reminder that he’s not a lock to stay on top of the QB rankings.
Week 2
Another solid night from a fantasy perspective for the Chiefs signal caller. His night was moving along nicely until he threw an untimely interception late in the 3rd quarter that sparked the Ravens comeback.

Mahomes was spreading around the love in this game, hitting 9 different pass catchers. Mahomes did have three 33+ yard touchdowns to Demarcus Robinson, Byron Pringle and Travis Kelce and finished the game 24 of 31 for 343 yards.

There isn’t much to say about this guy, he is an elite QB in fantasy football and real football. He puts up massive numbers in the passing game every week with his two elite weapons in Kelce and Tyreek Hill. If you have him, you’re starting him every single week regardless of the matchup.

We have Mahomes at QB2 this week against a beat-up Chargers defense. Mahomes will continue to put up big fantasy performances in this explosive offense. We have him ranked at QB2 the rest of the season.
Week 1
Mahomes completed 27 of 36 passes for 337 yards and 3 TDs in Kansas City's 33-29 Week 1 win over the Browns. He added 5 rushes for 18 yards and another TD.
The Chiefs fell behind early as the Browns scored TDs on their first 2 drives while Mahomes and the Chiefs only mustered up a FG on their first drive.
Mahomes ran in a TD on the Chiefs 2nd drive to cut the deficit to 15-10, but then the Browns scored another TD before the half to go up 22-10.
The 2nd half was a different story as Mahomes connected on 3 passing TDs, with 2 of them going to Travis Kelce and the other a 75-yard bomb to Tyreek Hill.
Mahomes looked like the MVP again, completing 75% of his passes and accounting for 4 TDs against a competent Browns defense. He should be locked in as a top 3 fantasy QB no matter the matchup. The Chiefs head to Baltimore in Week 2 to take on the Ravens.

Mahomes kept on rolling last year, turning in his 3rd straight top-6 fantasy season. He underwent offseason foot surgery but should be back to 100% well before the start of the 2021 campaign.

With WR Tyreek Hill and TE Travis Kelce back -- plus a revamped and likely much-improved offensive line -- Mahomes is a safe bet for another high-end fantasy finish.

The question, of course, is just how early he’s worth drafting. In standard fantasy leagues, the 4th round feels like a fair price. He’s in the running for the #1 overall pick in 2-QB and superflex setups.

Chiefs QB Patrick Mahomes confirmed on Friday that he'll have no restrictions at the start of training camp. That's no surprise after he was a full-go in June workouts, but it's another reminder that last year's toe injury will not be an issue in 2021.

Mahomes: No problems with foot

Chiefs QB Patrick Mahomes was a full participant in minicamp and doesn't sound at all worried about the left foot injury that required surgery after the Super Bowl. “I don’t see any problems moving forward,” Mahomes said. “Obviously I’m going to continue with the rehab and work to strengthen it. I feel I had good OTAs, a good minicamp. I was able to move around and do the things I needed to do.” Barring a setback, the foot will be a non-issue this season.

Chiefs QB Patrick Mahomes (toe) is a full participant in OTAs this week, according to HC Andy Reid. “He’s been doing everything,” Reid said of Mahomes, who had turf toe surgery 2 days after the Super Bowl. “He’s been a full go, and he’s still working with [trainer] Rick [Burkholder] with the toe. We utilize this as more of a passing camp. We don’t run the ball much. His toe has really done well.” Mahomes has been setback-free in his rehab and is on track to be at 100% well before Week 1.

Mahomes will participate in OTAs

Chiefs QB Patrick Mahomes is "ahead of schedule" in his rehab from February toe surgery and will "do some stuff" in OTAs this coming week, according to NFL Network's James Palmer. Mahomes is on track to be a full-go for the start of training camp. The toe shouldn't be an issue in 2021. Playing behind a revamped (and likely much-improved) offensive line, Mahomes is the favorite to lead all QBs in fantasy points this year.

Mahomes expected to be ready for training camp

Chiefs QB Patrick Mahomes is expected to be ready for training camp after undergoing toe surgery on February 10, GM Brett Veach said. Mahomes has been slapped with a 3-month timeline for recovery, which would put him back at 100% by May. Veach is hoping Mahomes can get on the field for June minicamp (assuming minicamps happen this year). We'll continue to keep a close on the situation, but we're not expecting the toe to be a factor in 2021.