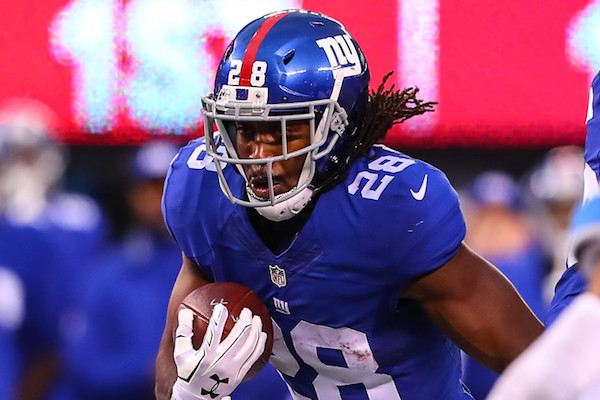 The Lions have activated RB Paul Perkins from the practice squad. He was signed in mid-September and waived a month later before landing on Detroit's practice squad. Perkins sports a career 3.6 yards-per-carry average and figures to slot in as the #3 RB behind Ty Johnson and J.D. McKissic. It's excellent news for Johnson if this is the only move the Lions make at RB.

The Giants have waived/injured RB Paul Perkins with a non-football injury, according to SNY's Ralph Vacchiano. Perkins had surgery in late April for a torn pectoral muscle. If he clears waivers, he'll revert to IR with the Giants. An obvious disappointment even for a mid-round pick, Perkins must prove that he's worth our fantasy attention before you need bother with him further.

Perkins out for Week 7

Giants RB Paul Perkins (ribs) is out for Sunday’s game against the Seahawks. He got back on the practice field this week and should be nearing a return. But Perkins will likely find himself behind Orleans Darkwa and Wayne Gallman on the depth chart. Darkwa figures to serve as the lead back this weekend and is in the RB3/flex mix.

Perkins out for Week 6

Giants RB Paul Perkins (ribs) is out for Sunday night's game vs. the Broncos. It'll be Wayne Gallman, Orleans Darkwa and Shane Vereen in the backfield. Don't expect New York's running game to get anything done against a Denver defense allowing just 2.4 yards per carry to RBs. Gallman and Vereen should soak up a good number of targets, though.

Giants RB Paul Perkins (ribs) remained sidelined on Wednesday. That's not a good start for his chances of returning for Sunday night's game against the Broncos. Perkins, of course, has pretty much fallen off the fantasy radar with the emergence of RBs Wayne Gallman and Orleans Darkwa.