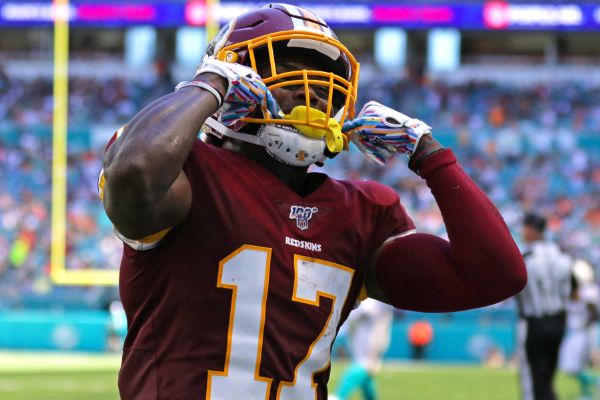 Washington WR Terry McLaurin (concussion) isn't listed on the final Week 15 injury report after putting in 3 full practices this week. He'll play vs. the Eagles on Tuesday night. It remains unclear who McLaurin's QB will be for that one. Taylor Heinicke and Kyle Allen remain on the COVID list as of Monday afternoon but have until 4 pm ET on Tuesday to be activated. WR Curtis Samuel (hamstring) is out for Week 15.

Washington WR Terry McLaurin (concussion) was a full go in Saturday's practice. We won't get the team's final injury report until tomorrow with the game vs. the Eagles moved to Tuesday, but McLaurin now looks likely to play in that one. Washington's QB questions, though, leave him as a shaky play as anything more than a WR3.

Washington WR Terry McLaurin (concussion) has gotten in 2 limited practices this week. He now has 2 extra days to clear the protocol after his game vs. the Eagles got moved to Tuesday. We’ll keep you updated on his status, but it might be tough for fantasy owners to wait on McLaurin if we don’t hear that he’s cleared before the Sunday games kick off.

Washington WR Terry McLaurin (concussion) returned to a limited practice on Thursday. He's made some progress through the protocol and has a chance to be cleared for Sunday's game vs. the Eagles. We'll get another update on his status tomorrow.

McLaurin does not practice Wednesday

Washington WR Terry McLaurin (concussion) did not practice on Wednesday. He has a lot of work to do if he wants to clear the concussion protocol before Sunday's game vs. the Eagles. At this point, fantasy owners should not be counting on McLaurin in Week 15 lineups.

McLaurin has tallied the 12th most targets all-time over his 1st 3 seasons and turned that into the 14th most receiving yards in that span. Carson Wentz should be at least a moderate upgrade over Case Keenum/Dwayne Haskins/Kyle Allen/Alex Smith/Taylor Heinicke. We'll see how much more upside that will unlock. Heading into his age-27 season, McLaurin is 2 years older than classmate D.K. Metcalf, a year older than fellow classmates A.J. Brown and Marquise Brown, and 2 years older than D.J. Moore (who has been in the NFL a season longer).