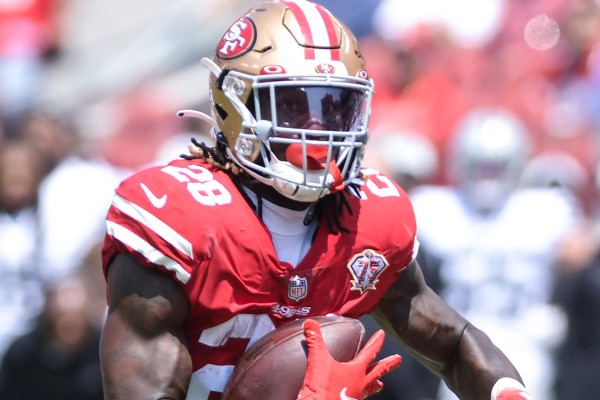 Week 4
With Eli Mitchell (shoulder) missing another game and little competition for touches, Sermon took aim at a Seattle run defense that is far less stout than they’ve been in the past. Although he didn’t break off long runs, he was consistently able to fight through initial contact to gain positive yardage on most of his rushing attempts. However, with no targets or TDs, his solid rushing totals resulted in a middling fantasy performance.

Any RB who lines up in the 49ers backfield has value, but Sermon hasn’t taken full advantage of his opportunities in his 2 weeks as the lead RB. That, of course, was after being a healthy scratch in Week 1. Certainly, he should retain a role in this decimated backfield, but if Eli Mitchell returns from a shoulder injury this week, it’s possible that Sermon returns to being on the small side of a timeshare. And if Jeff Wilson returns in November, that could impact Sermon’s long-term role.
Week 3
Thanks to myriad injuries in the San Francisco backfield, Sermon got his 1st career start on Sunday night against Green Bay. However, Sermon didn’t do much to grab hold of the lead-back duties in this one.

He only averaged 3.1 yards per carry on his 10 attempts. His bright spot for the night was a 1-yard TD plunge in the 4th quarter, as the 49ers were making a comeback. That didn’t produce a great game script for the rookie RB. We will see how his usage looks next week, if Elijah Mitchell remains out. Sermon added 2 catches (on 3 targets) for 3 yards to his 10-31-1 rushing line.

We have Sermon ranked at RB37 this week against the Seahawks. We have San Francisco RBs with a top 5 easiest strength of schedule for the rest of season so there could be great opportunity for Sermon if he is able to grab a significant share of the touches. Unfortunately, we have no idea what this backfield will look like the rest of the season with Elijah Mitchell returning soon and Jeff Wilson, Jr. expected to return around midseason.

Currently, we have Sermon ranked at RB47 for the rest of the season.
Week 2
The positive: Sermon was at least active for his 2nd NFL game.

The negative: He played 1 snap, fumbled and sustained a concussion. Elijah Mitchell, meanwhile, operated as the clear lead back. Sermon’s lone touch didn’t come until 5:41 remained in the 4th quarter, after Mitchell and JaMychal Hasty had left with injuries. (Mitchell returned.)

Sermon is droppable in many fantasy formats at this point, though Hasty’s high-ankle sprain gives Sermon some “hold” upside if you don’t have any truly attractive options to drop him for.

There’s some sorting out that needs to be done in San Francisco’s backfield this summer. And it’s possible that this is a 2-, 3- or even 4-man committee throughout the season.

But it’s also possible that Sermon emerges as the best of the bunch. And we’ve seen HC Kyle Shanahan deploy clear lead backs in the past. There’s intriguing upside here -- especially once rookie QB Trey Lance takes over.

49ers HC Kyle Shanahan confirmed on Wednesday that RB Trey Sermon remains behind Elijah Mitchell and Jeff Wilson on the depth chart. “Trey had an opportunity (earlier this season) when guys got hurt and I thought he got better in each game with that. But he didn’t do enough for us to put him ahead of Elijah or Jeff," Shanahan said. Sermon could get some touches this weekend if Mitchell's finger injury keeps him out, but Wilson would be the 49ers RB to use in fantasy lineups.

Sermon to get the "bulk of carries" in Week 3

49ers RB Trey Sermon will "lead the way" and get the "bulk of carries" vs. the Packers tonight, according to NFL Network's Mike Garafolo. We've heard the same from multiple 49ers beat writers. Sermon isn't the safest Week 3 fantasy play -- but he has loads of upside in a plus matchup.

49ers RB Trey Sermon (concussion) has been medically cleared and isn't listed on the final injury report. With RB JaMycal Hasty (ankle) out and RB Elijah Mitchell (shoulder) doubtful, it's currently Sermon, Trenton Cannon and Jacques Patrick at RB on San Francisco's active roster. RBs Kerryon Johnson and Chris Thompson are eligible to be activated from the practice squad. HC Kyle Shanahan wouldn't say Friday afternoon who will get the start vs. Green Bay, but multiple 49ers beat writers expect it to be Sermon. We'll continue to look for clues on how the touches will be divvied.

49ers RB Trey Sermon (concussion) remained limited in Thursday's practice. He still has multiple stages of the protocol to clear if he's to play vs. the Packers on Sunday night. We'll get another update on his progress tomorrow.

49ers RB Trey Sermon (concussion) got in a limited practice on Wednesday. It means that he's made some progress through the league's protocol. If Sermon can get cleared in time for Sunday night's game vs. the Packers, the 49ers might be forced to give him a significant role.