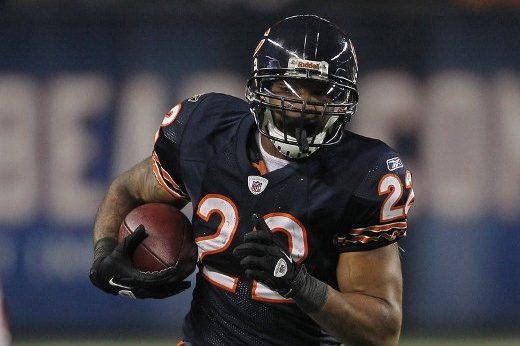 Do enough fantasy football drafts and you end up deploying all sorts of strategies. My general philosophy going into every draft is to grab the best players available, regardless of position, with my first 6 or 7 picks. Then I start looking to fill positional needs.

In most cases, that strategy ends up landing me a bunch of RBs and WRs with my early picks. I took that to the extreme in a recent MFL10.

(If you haven’t checked out the MFL10s yet on MyFantasyLeague.com, I’d highly recommend it. Careful, though … they’re addicting.)

Here’s a look at all 22 of my picks. You can view the full draft results here.

That’s 9 straight RBs or WRs to start the draft. Again, I didn’t go into this thing planning to start that way. But I was looking for the top value at each of those picks. It just so happened that the top value was never a QB or TE.

I gave serious consideration to Matt Stafford at 6.08. But landing Wallace as my 3rd WR was more important.

Robert Griffin was at the top of my target list in the 7th, but he came off the board at 7.01.

Nick Foles was an option in the 7th, but I decided to nab Emmanuel Sanders to complete a top-notch WR quartet.

Tony Romo (8.12) and Jay Cutler (9.11) were both selected a few spots ahead of where I was looking at them. Maybe I should have been more aggressive in targeting those 2 guys, who both have top-10 upside this season. But passing allowed me to assemble groups of RBs and WRs that should give me an advantage over the rest of the league.

In Forte, Ball and Ellington, I have 3 guys who could finish among the top 10 in PPR leagues. Ball and Ellington, especially, have the type of big-game ability that gives them added value in this best-ball setup. I’m not counting on a full 16-game season from Steven Jackson, but his combination of pass-catching and TD-scoring upside could make him a RB2 for as long as he’s on the field. He’s a good value in the 8th.

My WR group isn’t as top-heavy as my RBs, but it’s deeper. Crabtree, Wallace and Jackson all rank among our top 22 PPR WRs. Sanders and Stills come in at 33rd and 38th, respectively. That’s 5 top-38 WRs in a 12-team league. And all 5 have the potential to blow up any given week.

I’ll obviously be counting on my RBs and WRs to carry me, because my QBs and TEs are nothing special. But I think both groups are good enough to keep me competitive at those positions.

Getting by at QB and TE

By drafting 3 guys at each spot, I’m playing the numbers game. I don’t need to pick which one to start each week. I just need 1 of the 3 to turn in a solid showing.

Last year, Wilson, Dalton and Smith combined for 21 top-12 scoring weeks. Week 1 was the only time all season that saw all 3 guys fail to finish inside the top 12.

Now, Dalton isn’t finishing as a top 3 fantasy QB again this season. But Wilson could improve on last year’s numbers. So could Smith. The trio is plenty capable of providing my squad with another 21 top-12 weeks. And if that’s the case, I’ll be getting QB1 production without spending any of my first 9 picks on the position.

Same story with the TEs. Walker is being vastly underrated in fantasy drafts after finishing 12th at the position last year. He turned in 5 top-12 weeks in 2013 and should be good for at least that many in 2014.

Allen is a nice target in best-ball leagues. The Colts’ crowded pass-catching corps figures to make him tough to rely on week in and week out. But he’s a talented player in an explosive offense that should post a handful of big games.

Toilolo’s TD upside makes him a useful best-ball addition. The 6’8, 265-pounder could hit pay dirt 6-8 times this season. He’ll be a fine starting option for me each week he scores.

I wouldn’t recommend waiting this long for your QB and TE in a standard fantasy league because choosing the right starter each week is a tough task. I wouldn’t even recommend going into a best-ball draft planning to deploy this strategy. But if you assemble an elite cast of RBs and WRs, quantity over quality at QB and TE can work.

I’ll revisit this draft after the season and break down how my team turned out. 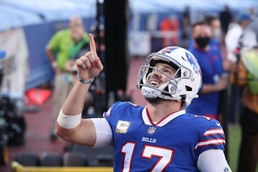 It's a rematch of January's AFC Championship game. It's 2 high-powered offenses, but only 1 quality defense. Who wins the Josh Allen-Patrick Mahomes points duel? And where can we find cheap value to help fit those QBs?