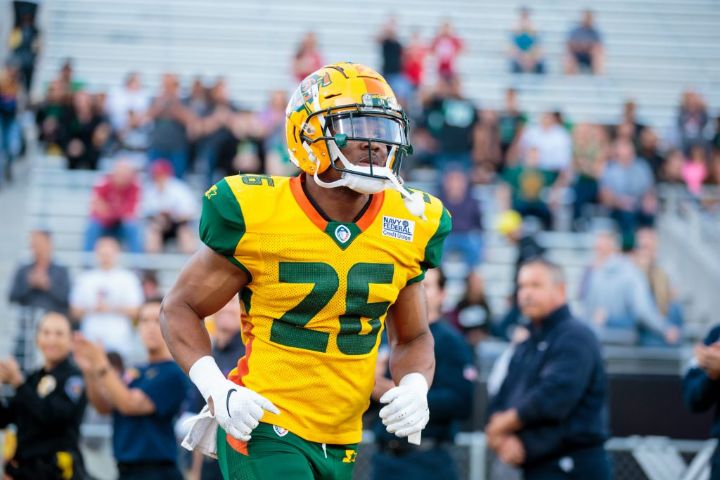 I ran through a little intro to the XFL on whole (including some key rule variations) in the Dallas Renegades article that led this series.

This time, no messing around. Let’s jump right into the D.C. Defenders ...

The D.C. staff doesn’t provide nearly so lengthy a record of play-calling as OC Hal Mumme brought to the Renegades. But the short record for OC Tanner Engstrand looks pretty intriguing.

He spent 5 years running the University of San Diego offense before moving on to Michigan as an “offensive analyst” under HC Jim Harbaugh. Three of those 5 Toreros offenses averaged more than 35 points per game. Four of them averaged more than 410 total yards per game. All 5 averaged at least 5.3 yards per play, including 3 that averaged 6.1 or more.

Engstrand gained all those yards and points despite spending most of that time running more than he passed. Only his 2013 offense (1st season as San Diego OC) averaged more pass attempts than rushes per game -- and even that one threw 36.4 passes per contest vs. 33.7 runs. Overall, his 5 San Diego offenses averaged 31.6 pass attempts per game and 37.7 rushing attempts. He assisted even more run-heavy offenses at Michigan before this Defenders gig.

HC Pep Hamilton spent 3 years as Colts OC in the NFL, and had his Andrew Luck-piloted offenses lean much more on the pass. Those 3 teams finished 15th, 1st and 9th in the league in pass attempts; 23rd, 17th and 21st in rushes, respectively. And the 2016 Browns -- for whom he served as assistant HC and QBs coach -- went similar.

But Hamilton also spent 2 years as Stanford’s OC before his NFL stint and 2 years as Michigan’s assistant OC/passing-game coordinator. Every one of those offenses averaged at least 7.7 more rushes per game than pass attempts. Collectively, the 4 averaged 28.5 passes and 40.5 rushes per contest.

In spite of the run-heavy history, the Defenders opened their skill-position draft with a pair of pass-catchers. Neither made it to the regular-season roster, though. Davis left to sign with the Tennessee Titans, and D.C. traded McBride to the L.A. Wildcats for WR Rashad Ross.

I won’t lie and say that I watched much of the Tanner Engstrand Toreros offense. But I did read that those groups became “known for stretching defenses vertically and horizontally.” The horizontal part, apparently, comes from varying formations and using lots of motion. Vertical? We all know what that means. And Jones has plenty of arm to exploit that aspect.

A 4th-round pick of the Bills in 2016, Jones hasn’t done much in the NFL. But he racked up 8.6 yards per pass attempt in a limited Ohio State career that also included 617 yards and 4 TDs on the ground. This roster appears well built to complement the ground work with deep shots. Four of Engstrand's 5 San Diego teams included at least 1 WR with more than 16 yards per catch on 40+ receptions. Five total players in that span ranked among the team's top 2 in receptions while topping 16 yards per catch -- including a pair of #2 receivers who topped 18 yards per catch.

This corps will likely have to take shape a bit after the games begin. Ross carries intrigue because of his speed (4.41-second 40) and recent strong performance in the short-lived AAF: 36 catches, 583 yards, 7 TDs in 8 games. L.A. drafted him with the 9th overall pick of the skill-position draft before trading him. It seems like that might have been more of a personality clash than performance related, though.

Thompkins presents a similar athletic profile: He stands 1 inch shorter and 7 pounds heavier than Ross, and runs even faster (4.39). Thompkins caught 80 passes over his final 3 years at Penn State.

Rogers would be chasing both teammates in a race, but he ranks among the XFL’s most accomplished NFL players. Rogers caught 78 balls for 822 yards and 4 TDs over 3 seasons with the Steelers after arriving as an undrafted free agent. Rogers finished each of his 4 seasons at Louisville in the 41-45 reception range and averaged 11.5 yards per catch for his career.

No skill-position player remains on the Defenders roster that the team drafted higher than Pressley. That followed him leading the AAF in rushing yards after a nice career at New Mexico. Pressley never handled feature-level work (topping out at 147 carries as a senior), but he averaged 6.9 yards per rush for his career and scored 36 total TDs. Pressley only caught 18 balls for his career, but averaged 12.2 yards per reception.

Pumphrey, meanwhile, finished college as the NCAA’s all-time leader in both rushing yards and total yards from scrimmage. Despite his small stature (5’8, 178), Pumphrey racked up 276+ carries in each of his final 3 seasons at San Diego State, while averaging 6.0 yards per rush for his career. He added 99 receptions at 10.5 yards per catch. Pumphrey landed in Philly as a 4th-round selection but has yet to garner a regular-season touch.

So who wins now that these guys share a backfield? Quite possibly both, if things follow the coaching history of OC Tanner Engstrand. Keep both in mind for at least setting Week 1 DFS lineups.