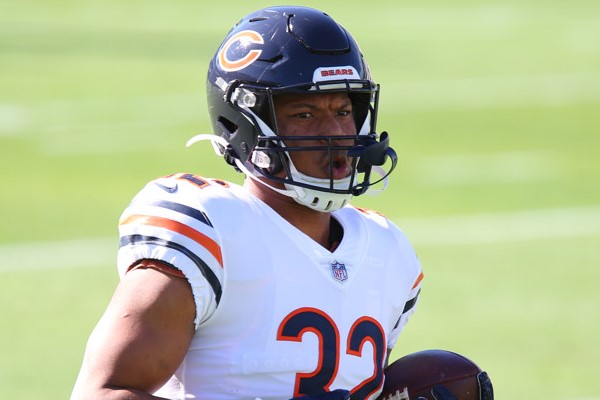 Week 14
Even in a losing effort, there were a lot of positives for Montgomery on Sunday Night Football against the Packers. Montgomery came into this game very banged-up from an injury standpoint but was still able to lead the team in carries, targets, and receptions on the night. He was able to pick up solid gains on the ground and through the air for a Bears team that struggled to do much in the 2nd half. He finished the night with 10 carries for 42 yards and 6 catches (on 7 targets) for 39 yards. Montgomery has become a true workhorse back for the Bears, seeing at least 15 touches in each of his last 5 games. We have Montgomery ranked as our RB9 this week against the Vikings. The Vikings have surrendered over 325 yards and 2 rushing TDs to opposing RB groups over their last 3 games. The next three games on the Bears schedule to wrap up the fantasy football playoffs include MIN, @SEA, and NYG.
Week 13
Even though the Bears trailed this game throughout, Montgomery was given 21 carries. However, much of that had to do with the fact that he was their best chance to move the ball against an excellent Arizona defense. The game was also played in heavy wind and rain throughout. Because of the pass pressure the Cardinals were applying to Andy Dalton, Montgomery led the team with 9 targets, and he led the team with 8 catches and finished second in receiving yards. On his TD, he used a pair of elusive moves to maneuver into the end zone on a play he didn’t have much space to operate.

Despite elite usage and snap share, Montgomery hasn’t been the same player he was in Weeks 1-4 before sustaining a knee injury. In those 4 games, he scored 3 times with a pair of 100-yard games. In the 3 games leading into this week, he hadn’t scored while posting between 68 and 80 yards and averaging 15 carries and 2 receptions. However, he’ll have an excellent schedule in the fantasy playoffs when he faces 3 defenses in the bottom 11 vs. RBs in the Vikings, Seahawks and Giants. In those games, he should have a RB2 floor with RB1 upside.
Week 12
It was surprisingly tough sledding for Montgomery vs. the Lions on Thanksgiving. He finished with just 46 yards on 2.7 yards per carry. Montgomery had no run longer than 12 yards and was stuffed for no gain or a loss 5 times. He kinda, sorta salvaged his fantasy day with 3 catches on 3 targets for 28 yards.

The good news for Montgomery going forward is that he continued to dominate the Bears backfield. He played 84% of the offensive snaps and handled 17 of 21 RB carries. Montgomery has now hogged 83% of Bears RBs carries in 3 games since returning from injury.

That, unfortunately, has only meant a modest 14.7 carries per game. And Montgomery has averaged just 2 targets over that span. There’s upside for more if game flow and play calling works in his favor, but consider Montgomery just a floor RB2 play the rest of the way.
Week 11
Montgomery rushed 14 times for 54 yards in the Bears' Week 11 loss to the Ravens, adding a 9-yard reception.
Montgomery led all RBs in snap share as he has surprisingly kept his workhorse role coming off an extended absence with a knee sprain. This was a tough matchup for the Bears as they couldn’t get anything going against the Ravens.
Montgomery has an elite matchup in Week 12 against the Lions and should be used as a low-end RB1.
Week 9
In his return after missing 4 games with a knee injury, Montgomery went right back into his lead role despite Khalil Herbert playing very well during Montgomery’s absence. Not only did he have an 85% snap share, but he had 13 carries and 2 targets while Herbert was just a chance-of-pace option with 4 carries. Being slightly overmatched at times by the Pittsburgh defense, Montgomery had snaps as a wildcat QB, and he was instrumental by making a read that helped Darnell Mooney score on a 15-yd TD run. Overall, his 4.8 yards per carry was impressive on the road against a solid Pittsburgh defense.

After the Week 10 bye, it would be a major surprise if Montgomery didn’t maintain the same high snap share and touch volume that he had in this game. Aside from a tough Week 13 matchup against the Cardinals, he has 4 matchups against bottom-10 defenses against the run, along with middling matchups against the Packers and Vikings. Before the injury, he had a pair of 100-yd games in 4 contests, and with that remaining schedule, he should have a strong finish to the year.
Week 4
Montgomery rushed 23 times for 106 yards and 2 TDs in the Bears' Week 4 win over the Lions.
Montgomery was beasting from the beginning of the game with TDs in both the 1st and 2nd quarters.
Unfortunately, Montgomery was knocked out of the game with a knee injury in the 4th quarter and was quickly ruled out for the rest of the game. He’s expected to miss 4-5 weeks.
Damien Williams should now be the featured back in Chicago and should be viewed as a RB2 option in Week 5 against the Raiders.
Week 3
Why didn’t the Bears run more to help their rookie QB in his 1st start? That’s an easy question to ask after Montgomery finished with the team’s only 10 RB carries of the game. But the answer might be another question: How much would it really have helped?

Pro Football Focus grades the Bears 2nd-worst in the league in run-blocking, ahead of only the Raiders. Football Outsiders rates them 28th in adjusted line yards.

If Chicago can come up with a better game plan for leveraging the downfield ability and speed of WRs Allen Robinson, Darnell Mooney, Marquise Goodwin and Damiere Byrd -- as well as protecting its talented rookie QB -- Justin Fields has the potential to help Montgomery find running room.

For now, though, Chicago’s offense is a tough one to trust in any particular area. That doesn’t mean you need to get rid of Montgomery for whatever you can get. But be willing to consider moving him in the right trade opportunity.
Week 2
Montgomery tallied just 61 yards on his 20 carries against the Bengals. Additionally, he caught 3 of his 4 targets for 18 yards. This volume was a great sign even with his fantasy day leaving something to be desired.

Going forward, having Justin Fields under center should only help to open things up for Montgomery. The increased use in the passing game was also a plus that would be fantastic to see stick. Work on all 3 downs with a mobile QB may help Montgomery return the value for where he was taken in drafts heading into the season.
Week 1
It was nice to see Montgomery have a big day in the season opener. The third-year pro broke off a 41-yard run on the second play of the game. Montgomery ran hard and looked quick hitting holes in this one. He was able to go over the 100 -yard mark in the third quarter in a game where the Bears trailed from start to finish. Montgomery finished the day with 16 carries for 108 yards and a TD. He added a 10-yard catch on his only target in the passing game. Montgomery looked like the best player on the field for the Bears in this game.
Montgomery was only on the field for 59% of the plays opening week, which is a bit concerning. However, he did a lot with his touches against a tough Rams front 7. We have him ranked at RB18 this week against Cincinnati. Cincinnati just held Dalvin Cook and the Vikings to 67 total rush yards, so it may be tough sledding. Once Justin Fields takes over as the starting QB, rushing lanes should open up for Montgomery and the numbers should reflect that. The third-year pro is ranked at RB17 the rest of the season.

Even if you’re skeptical of Montgomery’s fantasy numbers from 2020 (for good reason), the advanced metrics point to improved performance for the Chicago RB in his 2nd season.

The problem is the return of Cohen, which will almost certainly sap targets. The Bears also signed Damien Williams (to a small 1-year deal) and drafted Khalil Herbert (in Round 6), but neither of those players looks like a significant challenge to Montgomery’s outlook. The good news here is that fantasy drafters overall remain skeptical of the 3rd-year Bear. He’s going as RB20 early in Round 4 of FFPC best-ball drafts. He can fall well off his 2020 pace and still be fine at that level.

Bears RB David Montgomery (shoulder, groin, glute) is not listed on the final injury report after putting in a full practice on Friday. He should be ready for a workhorse role on Sunday night against the Packers.

Bears RB David Montgomery (shoulder, groin, glute) returned to a limited practice on Thursday. He should be fine for Sunday night's game vs. the Packers, but we'll get another update on Montgomery tomorrow.

Bears RB David Montgomery did not practice on Wednesday and is on the injury report with shoulder, groin and glute issues. This looks like a rest day after Montgomery racked up 29 touches in Sunday's loss to the Cardinals, but we'll get another update tomorrow.

Bears RB David Montgomery (knee) has been activated from IR, putting him in line to play vs. the Steelers tonight. It'll be his first action since Week 4. HC Matt Nagy said earlier this week that Montgomery remains the lead back when healthy -- but it's unclear if he's ready to step back into that role tonight. Montgomery and RB Khalil Herbert are risky fantasy plays tonight.

Bears HC Matt Nagy said Saturday that there's a "really good chance" RB David Montgomery plays against the Steelers on Monday night. Montgomery returned to practice on Thursday after going down with a sprained knee back in Week 4. RB Khalil Herbert has played very well in relief, but Nagy said earlier this week that a healthy Montgomery remains the lead back. What's unclear is whether Montgomery is ready to take back that lead role on Monday night. Your best bet is to avoid this backfield in Week 9 fantasy lineups.