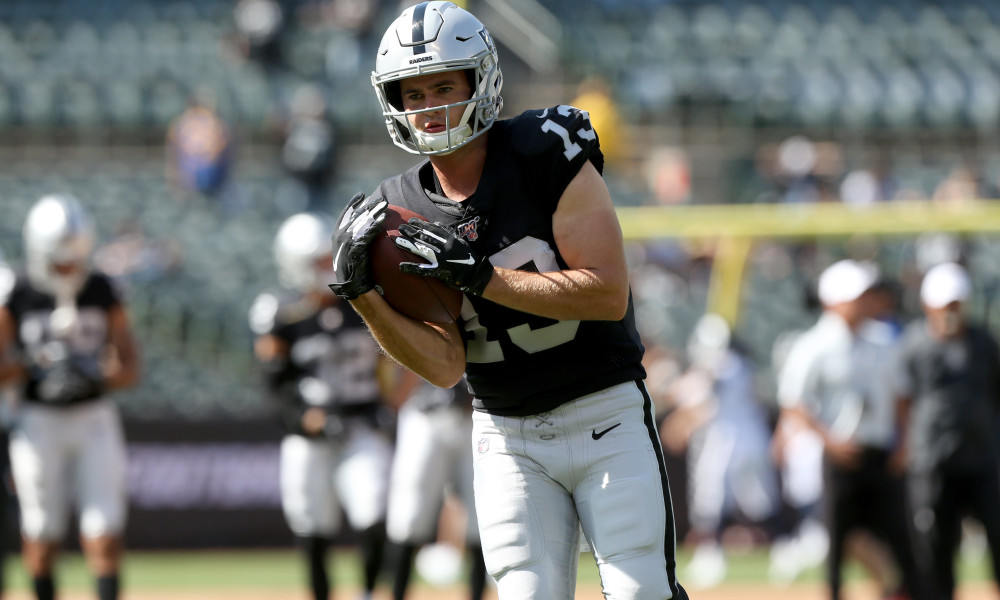 Week 14
Renfrow continued to act as the primary target for Derek Carr. With Darren Waller sidelined, Renfrow tallied 13 catches for 117 yards and 1 score on 14 targets. The slot target has now hit 100+ yards and caught 8+ balls in 3 straight. He’s also up to 11th in PFF receiving grade — so this isn’t some guy just capitalizing on volume. A legit route runner with sure hands, Renfrow will remain a viable WR2 for Saturday’s matchup with Cleveland. He’ll take a slight hit if Waller (knee) is able to return.
Week 13
With TE Darren Waller out for Sunday’s game vs. Washington, Renfrow was unsurprisingly a huge part of the Raiders’ passing game. He led the team with 10 targets -- a big 26.3% share -- and caught 9 of them for 102 yards. Most of Renfrow’s work came near the line of scrimmage, but he did make a big 28-yard grab down the seam in the 4th quarter.

Renfrow has now posted back-to-back 100-yard games after hitting triple digits in just 2 of his first 39 NFL outings. He’s certainly benefited from Waller’s absence. But Renfrow had averaged 7.3 targets and 6 catches over the previous 3 games alongside Waller.

We’ll see if Waller makes it back for Week 14’s rematch with the Chiefs. If he does, downgrade Renfrow to WR3 territory. He’s a WR2 if Waller remains out.
Week 12
Renfrow led all receivers with career highs of 8 catches for 134 yards, while tying his career high of 9 targets. Included was a 54-yard grab.
Renfrow has started just 5 games this season, but he has had at least 7 targets 8 times and at least 5 catches 9 times. The 3rd-year pro already has career highs of 64 catches, 82 targets and 658 yards in the 1st 11 games. The Raiders and QB Derek Carr are all in with the passing game, and Renfrow can be a big part of that emphasis.
Week 11
With the Bengals controlling this game most of the way, they were also able to control the clock. As a result, the Raiders threw just 27 passes in a game that would’ve seemed great for garbage-time production. It was obvious that Darren Waller was the focal point of the game plan, and he dominated targets. In addition, the Benglas were bringing heat on Derek Carr, so he frequently had to dump the ball off to the RBs. That left very little for Renfrow, who had just 4 targets, and the passes were so short that he was unable to post a catch of even 10 yards.

He won’t be the sexiest of fantasy options, but his floor is undeniable, and it’s nearly impossible to treat him as anything less than a WR3 the rest of the way. He came into this game having posted between 5 and 7 catches and 46 to 70 yards in all but 1 game. In addition, he’s scored in 4 of his last 7, and he’s been a huge factor in Las Vegas’ red zone offense. He’ll have an above average schedule the rest of the way, and there’s no reason to shy away from starting him every week.
Week 10
Renfrow continues to be one of the more creative route runners in the league. He used a four or five shake move to cook the CB and get open for a TD in the 2nd quarter. He continues to be one of Derek Carr’s favorite passing options and led the Raiders in catches and targets (25.7% target share) on Sunday Night Football against the Chiefs. He finished the night with 7 catches (on 9 targets) for 46 yards and 1 TD.

Renfrow has now scored in back-to-back games and has seen at least 8 targets in 5 of the last 6 games. Renfrow is our WR25 this week against Cincinnati. The Bengals secondary has allowed opposing WRs to reach the end zone in each of their last 3 games and just surrendered over 225 yards to Jets WRs in Week 8. The next 3 games on the schedule for the Raiders are CIN, @DAL and WSH. Renfrow is our WR34 for the rest of the season.
Week 9
Renfrow finished the Week 9 loss to the Giants with a 7-49-1 stat line. He was targeted 9 times on the game as QB Derek Carr relied on his safety valve in times of need. “Third and Renfrow” continues to lead the team with 30 targets the past 4 weeks. Renfrow will take on an even larger role in the offense in the absence of the team’s top deep threat. He has nicely stepped up into fantasy relevance and can be counted on in deeper PPR leagues. He currently sees a 19% target share in the Raiders’ offensive pass plays. Renfrow goes up against the Chiefs on Sunday night in a matchup that features a pretty stingy defense the past few weeks.

Week 7
Sunday marked the 4th time this year and 3rd time in 4 games that Renfrow garnered 8+ targets. His 8 looks led the Raiders in the win over Philly. His 7 receptions also led the team and represented a season high.

Renfrow hits the bye tied with Ja’Marr Chase for 20th among all wideouts in targets (32nd in targets per game). He also sits tied for 12th at the position in catches and 29th in yards (an area in which his 6.7 average depth of target will never be big winner).

Expect Renfrow to remain a solid PPR WR3/flex on the other side of the bye, with 1 of the league’s most favorable passing schedules the rest of the way.
Week 5
Renfrow remained a solid PPR option in this Raiders offense. He saw 8 targets, catching 6 for 58 yards. This was the 2nd straight game where he saw 8 targets. He has seen 6 or more in every game thus far this season.

Going forward, Renfrow should remain a PPR option that will be peppered with targets each week. He is clearly QB Derek Carr’s favorite option beyond Darren Waller.
Week 4
Renfrow caught 6 of 8 targets for 45 yards and 1 TD in the Raiders' Week 4 loss to the Raiders.
Renfrow led the team with his 8 targets but has a very low aDOT and is mostly used as a chain-mover on 3rd downs. In games where Renfrow doesn’t score a TD, he will probably hurt you.
He is best viewed as a WR4/flex option.
Week 3
Renfrow posted a 5-77-1 line in Sunday’s win over the Dolphins. That followed 6-70 and 5-57 lines to open the season. Renfrow has averaged 7.3 targets per game through 3 weeks. It’s past time to treat him as a viable fantasy option, especially in PPR leagues. There's just not a ton of upside to chase here.

Renfrow has been an effective possession receiver for the Raiders over the past 2 seasons. But his shallow targets and lack of red-zone role have left him short of real fantasy value. Don’t bank on that changing in 2021.

Renfrow will return for Week 16

Raiders WR Hunter Renfrow (rib) practiced all week and will return for Sunday’s game against the Chargers. The rookie is a low-upside PPR play.

Renfrow out for Week 15

Raiders WR Hunter Renfrow (rib) is out for this weekend’s game against the Jaguars. That’s good news for TE Darren Waller, who’s seen 15 targets over the past 2 weeks with Renfrow out.

Renfrow out for Week 14

Raiders WR Hunter Renfrow (rib, lung) is out for Sunday’s game against the Titans. That’s good news for TE Darren Waller, who averaged just 5.3 targets in the 6 games Renfrow saw 5+ targets this season vs. 9.2 targets in the other 5 games.

Renfrow out for Week 13

Raiders WR Hunter Renfrow (rib) is out for Sunday’s game against the Chiefs. The rookie averaged 5.8 targets over the last 4 games, so his absence is a nice boost for WR Tyrell Williams and TE Darren Waller.

Renfrow has rib and lung injuries

Raiders WR Hunter Renfrow suffered a broken rib and punctured lung in Sunday's loss to the Jets, according to NFL Network's Ian Rapoport. "It’s unclear at this point how long he’ll be out," Rapoport adds. We'd expect the rookie to miss multiple weeks with what sounds like a serious injury. Renfrow can be dropped in redraft leagues.