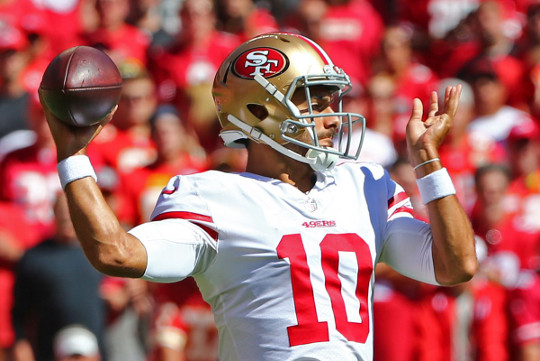 ESPN's Adam Schefter reports 49ers QB Trey Lance suffered a "significant" right ankle injury in the Week 2 win over the Seahawks. Lance is expected to need surgery that will "likely" end his season. You can hang on to him on fantasy rosters until we get official confirmation that Lance's season is over, which figures to come tomorrow. San Francisco will turn back to QB Jimmy Garoppolo, which will mean a significant shift in the offense. The 49ers' pass rate will climb, and there will be more carries to go around since Garoppolo won't be taking many.

49ers QB Trey Lance injured his right leg in the 1st quarter of Sunday's game vs. the Seahawks. He had to be carted off the field and is obviously done for the day. We'll pass along an update when we get one. QB Jimmy Garoppolo has entered for the 'Niners.

The 49ers remain "fully behind" QB Trey Lance, despite the decision to retain QB Jimmy Garoppolo, according to NFL Network's Ian Rapoport. Rapoport adds that the team simply couldn't pass up the opportunity to keep Garoppolo as a quality backup for just $6.5 million -- and that a midseason trade is still possible.

The 49ers and QB Jimmy Garoppolo are finalizing a new deal that will make him the "highest paid backup in the NFL," according to NFL Network. It's a surprising move after the 'Niners basically said all offseason that Garoppolo had no future with the team. San Francisco has committed to QB Trey Lance as the starter -- but Garoppolo's presence will make it easier to bench Lance if he struggles this year. We're not moving Lance in the QB rankings, but his fantasy floor is now a little low.

Update: ESPN's Adam Schefter reports that Garoppolo is getting $6.5 million guaranteed with "playtime bonuses that can boost it another nearly $9 million." So it's a backup-level deal with upside in case Garoppolo ends up playing more than expected.

49ers QB Jimmy Garoppolo has been cleared to practice after offseason shoulder surgery. "He has no restrictions and I’m watching him throw out here right now," GM John Lynch said. "He looks pretty good." With the 'Niners turning the offense over to QB Trey Lance this year, Garoppolo has been working separately from the rest of the team. We'll see if a trade materializes ahead of Week 1.