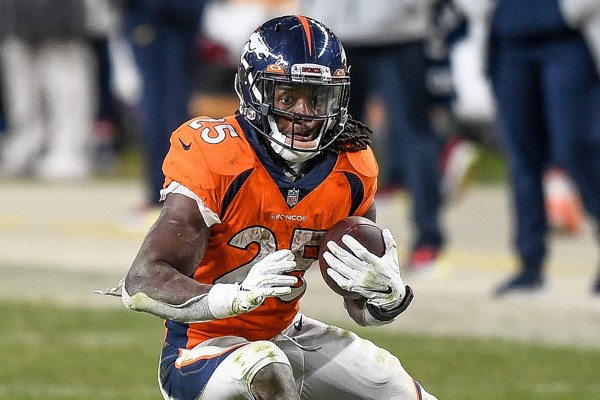 Gordon played well from a real-life perspective last season – even better than backfield mate Javonte Williams by a lot of metrics. And he scored as an upper-end RB2 for fantasy squads.

Williams is an ascending 22-year-old, though. And Denver let 29-year-old Gordon toil on the open market for over a month before bringing him back on a cheap, 1-year deal.

So we’re expecting Williams to claim a bigger piece of this backfield pie this season. We’ll see exactly how big – and whether there’s enough left behind for Gordon to still be a fantasy starter.

Broncos RB Javonte Williams had a decent day in Sunday's win over the Texans, rushing for 75 yards on 15 carries (5.0 per attempt) and adding a catch for 10 yards among 4 targets. The better news for Williams -- amid a rough day for the Denver offense on whole -- was that his playing time stood further ahead of Melvin Gordon's in Week 2. Williams played 65% of snaps against Houston, compared with 32% for Gordon. They went 58-41 in the opener. Gordon also saw his route rate dip further from what was already a good-sized gap in Williams' favor. So the role has looked good for Williams drafters. Now we just need Denver's offense to stop being run moronically.

Broncos RB Javonte Williams totaled 108 yards in Monday’s road loss to Seattle. He played 38 snaps (vs. 27 for Melvin Gordon) but was out-carried by the veteran, 7-12. Williams delivered in fantasy on the strength of 11 catches for 65 yards. But his night should have been better, as he fumbled right at the goal line. Gordon actually fumbled in the same spot — so neither guy was benched for the miscue. At bottom, we’re likely headed for more games with heavy rotations going forward. Williams at least looks in peak tackle-breaking shape. Look for his efficient ways to continue Sunday vs. Houston.

Hackett: We'll roll with the "hot hand" at RB

Broncos HC Nathaniel Hackett dropped the "hot hand" bomb on Friday when discussing his Javonte Williams/Melvin Gordon backfield. "I've always been a true believer in you want to roll with the hot hand," Hackett said. "One guy gets going, you want to be sure to keep feeding that person. But I think they're going to be great compliments to each other." It's the latest indication that Gordon will remain significantly involved in this backfield, at least out of the gate. We'll get our first look at the work split in Monday night's opener vs. the Seahawks.

Benjamin Allbright, a Broncos insider for KOA Radio in Denver, says those who draft RB Javonte Williams are "gonna be mad." He says it "looks like a 55/45" split between Williams and Melvin Gordon, "with some Mike Boone sprinkled in." Allbright adds that Gordon "is getting the situational work (GL, short yardage, etc)." The fact that we're getting varied reads on the situation from different reporters points to no one really knowing for sure what the Broncos' plan is. The sheer uncertainty adds risk to Williams at his Round 2 ADP and value to Gordon in Round 8.

Williams to "control" the backfield?

ESPN's Dan Granziano believes Broncos RB Javonte Williams "takes control of the backfield" this season. "I think [RB Melvin] Gordon, who has had a strong camp by all accounts, still has a role, but that it's a far more secondary role than he had last year," Graziano adds. It seems certain at this point that Williams will lead this Denver backfield. What we don't know is if it will be something like a 55/45 split, or more like a 70/30 split. You're banking on something closer to the latter if you're taking Williams in the 2nd round of fantasy drafts.

Gordon returns to Denver on a 1-year deal -- likely as the #2 RB behind Javonte Williams. The former Wisconsin star turned 29 in April.