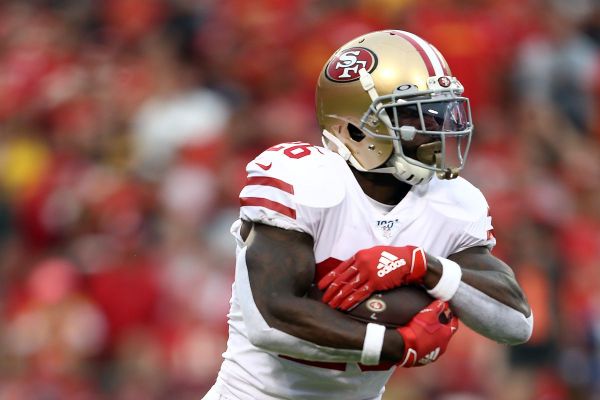 -He suffered a sprained knee in Week 2 that cost him 5 games. He re-injured the same knee in Week 8 and didn’t return until Week 13.

-Coleman missed 2 games during the 2019 season with an ankle sprain.

-Coleman signed a 1-year deal with the Jets in March. The deal includes only $400K guaranteed.

-In New York, he’s reunited with new HC Robert Saleh OC Mike LaFleur, who’s coached Coleman across 4 seasons (2 in Atlanta, 2 in San Francisco). LaFleur is a Shanahan disciple, so look for a lot of pre-snap motion and outside zone running to gain leverage on the defense.

-The system fit and familiarity is strong here. But the Jets snagged a potential Round 4 steal in UNC RB Michael Carter. A 4-year player, he’s pro-ready and brings excellent vision and agility.

-This offense doesn’t figure to rank anywhere close to the top of the league in scoring. There are young players throughout the unit, starting with rookie QB Zach Wilson.

-This offensive line looks excellent on the left side with LT Mekhi Becton and LG Alijah Vera-Tucker. But they’re much weaker at C, RG and RT.

-Coleman doesn’t project as a high-volume pass catcher. Carter thrives in that area, while Coleman’s never topped 32 catches in a season.

Perhaps his familiarity with the new coaching staff propels him to a solid start. But betting on Coleman staying consistent over a full season has rarely paid off. He’s an end-of-the-roster flier.

The Jets have agreed to a 1-year deal with RB Tevin Coleman. ESPN's Adam Schefter reports is worth a mere $2 million. That certainly doesn't set Coleman up as a favorite to control the backfield. He does, however, join new OC Mike LaFleur, who spent the past 4 seasons on the 49ers staff. Coleman also joins a corps that currently only includes La'Mical Perine, Ty Johnson, Josh Adams and Pete Guerriero. Heading into just his age-28 season, Coleman certainly has a shot to play a big role in the Jets' backfield plans. We'll see what else the team adds this offseason, though.

Coleman set to return for Week 13

49ers RB Tevin Coleman (knee) isn't listed on the Week 13 injury report. It looks like he's set to return for Monday night's game vs. the Bills -- his 1st action since Week 8. Coleman can't be trusted in fantasy lineups this week, but he does add a bit of risk to RB Raheem Mostert's profile. San Francisco will have Coleman, Mostert, Jerick McKinnon and Jeff Wilson available vs. Buffalo.

49ers RB Tevin Coleman (knee) got in a limited practice on Wednesday. He has a shot to return for this weekend's game against the Rams, along with RBs Raheem Mostert (ankle) and Jeff Wilson (ankle). San Francisco's backfield is murky as of now. Hopefully it clears up by Sunday.

Coleman out for Week 10

49ers RB Tevin Coleman (knee) has been ruled out for Sunday’s game against the Saints. RBs Raheem Mostert and Jeff Wilson remain on IR, leaving the backfield to Jerick McKinnon and JaMycal. McKinnon served as the clear lead back last time out, out-touching Hasty 15 to 6.

Coleman out for Week 9

49ers HC Kyle Shanahan confirmed that RB Tevin Coleman (knee) won't play against the Packers on Thursday night. It's unclear how much time Coleman will miss with this latest knee injury. San Francisco is down to RBs JaMycal Hasty and Jerick McKinnon vs. Green Bay's league-worst RB defense.