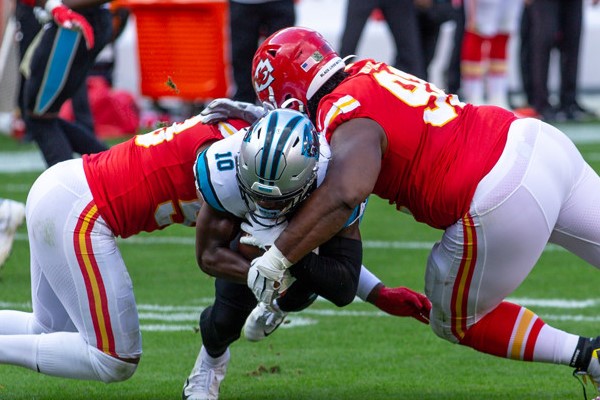 Hitchens out, 2 others questionable

The Chiefs have ruled LB Anthony Hitchens out for Sunday's game against the Titans. He's listed on the injury report with a triceps contusion, but it sounds like a nerve issue in his right elbow might be more significant. His absence leaves Ben Niemann and Nick Bolton as the likely LB leaders, with Bolton the more attractive IDP option. DL Chris Jones (hand) and CB Charvarius Ward (quad) are questionable for the game. Jones had missed time with a wrist injury but appears to have moved on from that. He finished the week with a full practice. Ward put in limited practices all week.

Changes could be coming at LB

In addition to the change at safety, ESPN's Jeremy Fowler reports that the Chiefs' defensive alterations could include "possibly more Nick Bolton and Willie Gay together at linebacker." It'll be a tough situation to read for IDP value before we see the new snap distribution among Chiefs LBs. We did move Anthony Hitchens down the Week 6 LB rankings, though.

Clark, Ward downgraded to out

The Chiefs have downgraded DE Frank Clark (hamstring) and CB Charvarius Ward to out for Sunday’s game against the Eagles. That hurts what has already ranked among the league’s worst defenses this season

Chiefs DE Frank Clark (hamstring) and CB Charvarius Ward (quad) are questionable for Sunday's game at Philadelphia. Each guy put in limited practices all week after missing last Sunday's loss to the Chargers. We'd try not to use either player in IDP lineups even if active. DL Chris Jones, meanwhile, is of the final injury report after putting in a full Friday workout. He played through a questionable tag last week with a wrist injury and fell short of his usual playing time. Jones then opened this week with a pair of limited practices. It seems the wrist should be better for Sunday's game, though.

Patriots-Chiefs pushed to Monday or Tuesday

The NFL is postponing Sunday's Patriots-Chiefs game, though they still expect to play it either Monday or Tuesday. ESPN's Adam Schefter reports that "Tuesday is more likely." That would keep players from those teams -- minus Cam Newton -- available for Week 4 fantasy football lineups, though all would obviously be off the main DFS slate. We'll continue watching for further updates. A postponement to Tuesday was also the initial plan for Steelers-Titans before that game ultimately got moved to Week 7. So far, at least, this situation doesn't include multiple positive tests amid either team.