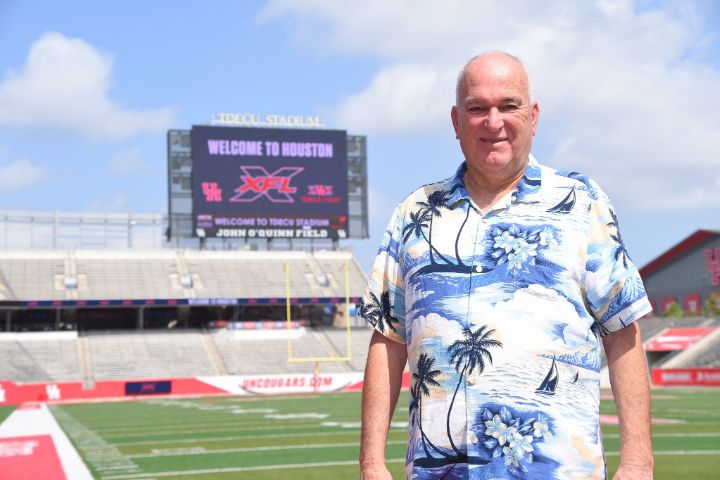 Is it possible to get excited about a passing game when we don’t even know who will play QB?

Well, it’s easier to do if that offense will be led by June Jones.

Welcome to Team 3 in our XFL preview series: the Houston Roughnecks.

(Also check out our preview for the Dallas Renegades and D.C. Defenders.)

If you don’t remember Roughnecks HC/GM June Jones, then you’re either young … or you probably should remember him.

Jones spent 3 years running just the offense and then 3 more as the head man. His 1st Atlanta offense (1991) ranked 15th in the NFL in pass attempts and 18th in rushing attempts. His next 5 all finished 6th or higher in pass attempts and 27th or lower in rushing attempts. Jones then spent 1 more year in the NFL, as QBs coach and then interim HC of the Chargers. That squad attempted the league’s 3rd most passes (and 12th most runs).

Jones favored more balance with his plays across 7 years at SMU. But his median over that span still sat at 36.9 passes vs. 28.9 runs -- without even accounting for sacks or QB scrambles.

Jones spent his last 2 pre-XFL seasons in the pass-happy CFL … and continued to lean pass. His Tiger-Cats ranked 4th in the league in pass attempts each year; 9th and 5th in total rushing attempts.

Of course, it’s worth noting that Jones isn’t actually the OC of his newest team. Who is? Chris Miller, who spent 3 years as a Falcons QB under Jones (1991-93). Miller’s only coaching experience to date as been 3 years as Arizona Cardinals QBs coach (2009-11).

QB … whoever he is

The Roughnecks apparently haven’t named their starting QB yet. That’s actually not too shocking, given how they approached the position from the start.

The league assigned Phillip “P.J.” Walker to Houston before the draft. So far, the only team in the league that doesn’t plan to start its assigned QB is the L.A. Wildcats. They traded QB Luis Perez to the N.Y. Guardians, where he sits behind assigned QB Matt McGloin heading into the season. So does that give Walker the edge here?

He did set and then reset the school record for passing yards in each of his final 2 seasons, while faring just OK as a runner. Walker sports above-average speed for the position, though: 4.79 seconds in the 40.

Connor Cook ran exactly the same time in his pre-draft testing but stands 5 inches taller than Walker. He garnered a 4th-round selection by the Raiders after throwing for 9,100 yards across 3 seasons as Michigan State’s starter. Cook finished his college career with 57.5% completions, 7.9 yards per attempt and 71 TD throws vs. 22 INTs -- plus not very much as a runner.

Whoever emerges as the starter here should find a friendly passing situation. Besides June Jones’ coaching history, Houston began the skill-position draft by selecting its 2nd QB at #2 overall, then a pair of WRs -- plus 3 more wideouts after a RB who didn’t make the regular-season roster.

Update: The Roughnecks have named Walker their starter.

Houston followed that 2nd QB pick with a pair of WRs who have each landed on the regular-season roster.

You’re likely more familiar with Coates. Among all players on the “final” 52-man XFL rosters, only RB Christine Michael got drafted earlier by the NFL. Coates went to the Steelers with the 23rd pick of Round 3 in 2015. He then proceeded to catch just 29 balls across 4 seasons with the Steelers, Browns and Texans -- most of those (and 82% of his career yardage) in his 21-reception 2nd season.

Houston drafted the younger Lewis a round earlier than Coates, however. Lewis caught 168 balls across 4 seasons at University of Cincinnati, posting the following receiving lines over his final 3 campaigns:

Of course, June Jones’ presence means we probably don’t need to choose between these guys. Three of Jones’ final 4 Falcons offenses each sported 3 wideouts with 100+ targets. His final Falcons offense had 3 WRs with 90+ targets. Jones’ initial Roughnecks roster is the only 1 in the league without a TE.

There will be plenty of passes to go around. Also keep an eye on speedy Ray Bolden (171 catches in 3 seasons at Stony Brook) and Cam Phillips (236 catches in 4 seasons at Virginia Tech; spent 2018 with Bills as an undrafted free agent).

The “plenty of passes” thing figures to extend to the backfield as well. I haven’t been able to find why top RB pick Kyle Hicks didn’t make it to the final roster, but his absence leaves more room for this pair.

You might remember Williams as a 4th-round pick of the Giants back in 2014 after a monster 355-2,177-18 rushing line in his final season at Boston College. Williams led his 1st Giants team with 217 carries, 721 yards and 7 TDs, but he averaged just 3.3 yards per rush and flamed out quickly after that. Williams followed a mere 10 career catches across 4 college seasons (including 0 as a senior) by snaring only 18 of 37 targets as an NFL rookie. That’d be a weak catch rate for a wideout. It’s freakin’ awful for a RB.

Williams gains some hope on the reception front from June Jones. Craig “Ironhead” Heyward stood 5’11, 265 pounds and caught no more than 19 balls for any non-Jones team. He tallied 32 and 37 receptions in 2 full starting seasons for Jones’ Falcons.

Henderson, though, could benefit from Williams’ lack of receiving ability. Henderson landed in Denver as a 6th-round pick in 2017 but garnered only 11 touches over the next 2 years. He spent 2019 bouncing around rosters and practice squads.

Before that, though, Henderson left Coastall Carolina as an intriguing prospect. He ran a 4.48-second 40 at 5’8, 207 pounds for a 103.3 speed score (74th percentile among NFL RBs). He average 6.4 yards per carry and 9.5 per catch over 4 years at Coastal Carolina, including 3 as the feature back.

Henderson’s 97 college receptions dwarf Williams’ record in that category. If he comes in cheaper than Williams in Week 1 DFS salary, I’m probably going Henderson in my initial lineups. (We’ll see what news might come out before then.)

In addition to the Heyward numbers above, Jones also presided over Falcons RB Jamal Anderson collecting 67 targets and 49 catches as the team’s #$ receiving option in his 1st starting turn and Jones’ final Atlanta season. Both numbers would remain career highs for Anderson.