If you’re annoyed at what COVID did to your Week 16 lineup, imagine how the Saints must feel.

None of us can really know what to expect from Book in his 1st NFL exposure, but he at least profiles as a QB capable of delivering fantasy points even if he struggles.

Book’s nearly 3 full seasons as starting QB at Notre Dame produced rushing totals of 280, 546 and 485 yards, along with 17 TDs on the ground. (Keep in mind that college stats subtract sack yardage from the QB’s rushing total.) He arrives with an 80th-percentile 40 time among QBs and 79th-percentile agility.

The rookie isn’t quite on Hill’s level as a runner, but he’s probably more Taysom-like than just about any other fill-in the Saints could conjure. And although his college passing was merely good enough to make him a Day 3 NFL Draft pick despite 3 years of national prominence, Book did at least throw 72 TDs vs. just 20 INTs over his Notre Dame career.

It won’t help his chances Monday night that Book steps into an offense with shrug emojis as top receiving options behind Alvin Kamara. COVID has further thinned that group by claiming TEs Adam Trautman and Juwan Johnson.

But the rushing is where our greatest hopes lie if we stick Book into any fantasy football lineups this week.

On the other side: COVID has enhanced the matchup for Tua Tagovailoa & Co. Saints S Malcolm Jenkins and LB Demario Davis are out, removing a pair of important coverage players and a key pass rusher from the New Orleans defense.

Now let’s see how the values stack up … 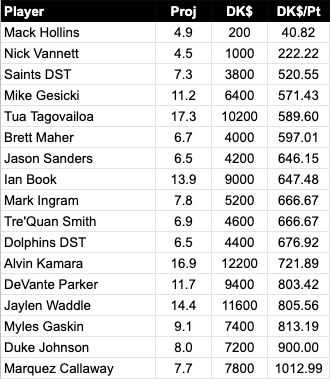 Credit COVID deactivations for the top 2 names on this value chart. Miami added WR Albert Wilson to the list Sunday, leaving opportunity for Mack Hollins. He should avoid CB Marshon Lattimore in coverage, with the Saints’ lead cover man likely to follow DeVante Parker as much as possible. Hollins, of course, is no lock for significant volume. He’s averaging just 1.7 targets and 0.9 receptions per game for the year. But his 6’4, 221-pound frame makes him especially attractive in the red zone. Of his 7 targets over the past 5 games, 6 have come inside the 20-yard line. Hollins has scored 3 times this season from inside the 10-yard line – among just 13 total receptions.

Nick Vannett, meanwhile, gets the de facto top TE spot for a Saints offense missing Adam Trautman and Juwan Johnson. We only need to look back to weeks 13 and 14 to find 10 total targets and a pair of games with 3 catches and 44+ yards. Of course, neither of those came with Ian Book as the QB.

Book is the biggest wild card for this slate. He could be a total disaster. After all, New Orleans had to go through 3 other (lackluster) QBs to get to him. But Book also has the running ability to deliver serious fantasy value – especially as just the 5th most expensive player in tonight’s game. 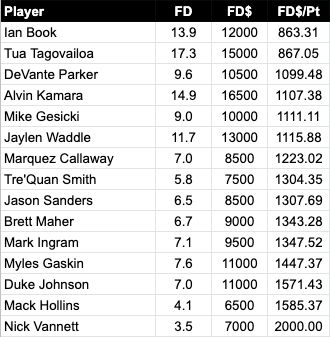 He’s probably an even better value on DK than here, but Mike Gesicki is worth highlighting somehow. It would be a mistake to call any member of New Orleans’ defense the primary coverage matchup for Gesicki, because his range of alignments and routes tends to find him working against various defenders every week. But Gesicki likely would have encountered both S Malcolm Jenkins and LB Demario Davis in coverage at some point in tonight’s clash. With both starters on the COVID list, though, Gesicki will find their backups instead. That can only help his upside, and the matchup already favors passing over running. New Orleans ranks tops in the league in run-defense DVOA.