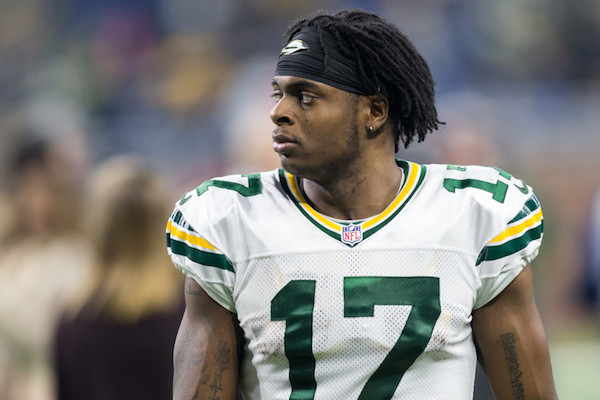 Adams has a new offense to learn and tougher target competition in Vegas than he’s had recently in Green Bay.

But he’s familiar with QB Derek Carr from their 2 years together in college, remained elite last year and is getting paid like an alpha WR.

While we’re projecting his volume and production to decline a bit from last season, Adams still looks like a locked-in WR1 with top 5 upside in Vegas.

Both Adam Schefter and Ian Rapoport report that the Packers are trading WR Davante Adams to the Raiders. Rapoport says Vegas is dealing a 1st-round pick "potentially more picks and a player," while Schefter says "two prime 2022 picks" are involved. Both also report that Adams is getting a 5-year contract from his new team that will make him the highest paid WR ever. The move reunites Adams with QB Derek Carr, who he played with at Fresno State. Adams, of course, has spent nearly all of his pro career to date working with QB Aaron Rodgers. The Packers QB, meanwhile, is now left without a lead WR. The trade has reportedly been quietly in the works for days, so we'll assume this news isn't being broken to Rodgers. We'll see how Green Bay addresses its pass-catching corps for 2022 (and beyond) after keeping Rodgers in town this offseason with an extension. Adams loses some draft value, for both the general uncertainty and joining an offense that has treated TE Darren Waller as the clear lead target in recent years. Adams should easily snatch the lead wideout role from 2021 target leader Hunter Renfrow, but we'd bet Adams' target ceiling coming down. Waller loses some target upside as well but should be operating in the best pass offense he's been in to date. We're not moving him significantly in 2022 outlook right now.

Adams not down with tag

NFL Network reports that WR Davante Adams has told the Packers he doesn't plan to play under the franchise tag this season. The veteran is seeking a long-term deal as he heads into his 9th NFL season, which will find him turning 30 in December. Adams won't be required to show up for any team activities until he signs his tender, so there's potential for a training-camp/preseason holdout if the 2 sides can't nail down an agreement. Green Bay has already reportedly offered money that would make Adams the highest-paid WR by annual salary, so we'd guess they get something done. We'll keep watch on the situation, though.

The Packers have applied the franchise tag to WR Davante Adams, keeping him off the free-agent market. The 2 sides will likely try to work out a longer-term deal, especially after Green Bay extended QB Aaron Rodgers. For fantasy football purposes, though, we can comfortably bet on Adams sticking with the Packers for at least 2022 (with his QB). Adams remains 1 of the safest early picks across fantasy formats.

Packers RB Aaron Jones (knee) is inactive for today’s game vs. the Lions. He’d likely be playing if this game meant anything to Green Bay and should be back for the playoffs. All of the Packers’ other regulars on offense are active, although it’s unclear how much guys like Aaron Rodgers and Davante Adams will play.

Despite locking up the NFC's #1 seed with their win on Sunday night over Minnesota, Packers HC Matt LaFleur said Monday that he plans to play his staters vs. the Lions this weekend. "Right now the mindset is we're going to play our guys, and we're going to approach it like any other game," LaFleur said. Color us skeptical -- especially when it comes to QB Aaron Rodgers, who's still playing through that toe injury. We'll look for further updates on Rodgers, WR Davante Adams and RBs Aaron Jones and A.J. Dillon.

The Raiders paid quite a bit in draft picks and contract to acquire Adams, so we'd bet on him keeping target-hog status in his new home. He'll face more competition in Vegas, though, than he did in recent Green Bay seasons. Adams will turn 30 in late December and appears locked in with the Raiders through at least 2024.