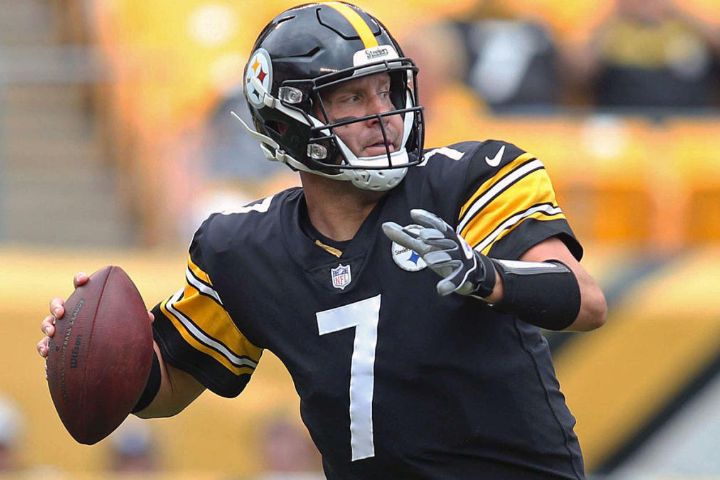 Ben Roethlisberger comes off a week on the COVID list to hit the road and face the Chargers.

Roethlisberger did test positive last Saturday, ahead of the tie with Detroit. But his quick return indicates we probably shouldn’t worry about any physical toll from his bout with the virus.

He returns to an offense that also gets WR Chase Claypool back. He missed the Lions game with a toe injury but practiced every day this week -- including full Friday participation -- and carries no injury status into the game.

The defense will miss S Minkah Fitzpatrick on the COVID list this week, along with EDGE T.J. Watt (hip, knee) and CB Joe Haden (foot). That’s not how you want to head into a meeting with Justin Herbert, Keenan Allen and Mike Williams.

L.A., meanwhile, gets S Nadir Adderley and CB Michael Davis back from injuries that sidelined them for Week 10. They return to face a Steelers offense that ranks just 25th in the league in scoring and 24th in yards. 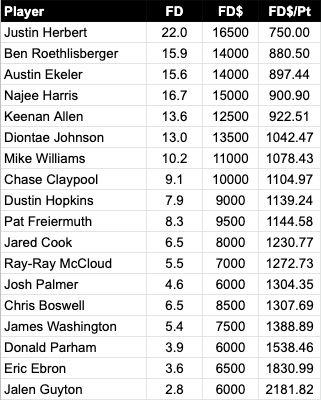 Rookie Josh Palmer leads the DK chart after seeing increased playing time the past 2 weeks, pulling close to and then even with Jalen Guyton in snaps. Palmer has yet to exceed 24 receiving yards this season, but he did garner 4 targets in last week’s loss to Minnesota. That was his 2nd 4-target game among the past 4.

Steelers WR Ray-Ray McCloud seemed to benefit from Claypool’s absence last week (and/or having Mason Rudolph at QB?). He racked up 9 catches on 12 targets after seeing just 3 total looks over the 3 previous games since JuJu Smith-Schuster went down. That game accounted for 24% of his career targets through 4 NFL seasons, so it’s tough to bet on anything close to that tonight.

The Chargers threw 6 short-range targets at Williams in last week’s loss -- plus a 7th look deep that drew a defensive PI. That shift in opportunities vs. his 5-week string of deep average target depths points to the team trying to get the early-season stud going again. A Pittsburgh defense missing its top outside corner and FS just might present the perfect opportunity to follow up and make that happen. 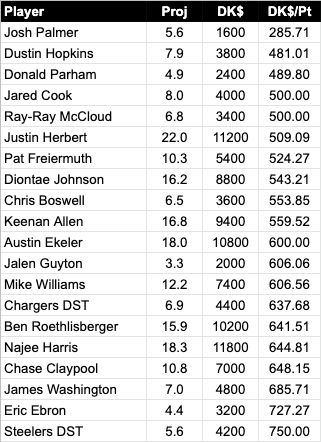 Williams checks in $1500 cheaper than Keenan Allen and $2500 short of Diontae Johnson’s price on FD. That sure makes him attractive, given the factors I mentioned above -- plus his playing with the QB that looks like the must-play between the 2 starters.

On the Pittsburgh side, Najee Harris looks tough to get away from. No defense has faced more RB carries this season than the Chargers, who also lead the league in RB rushing yards allowed and rank 2nd in RB rushing TDs yielded.