Now that the Colts have done the near-unthinkable and lost to the Jaguars, with a playoff trip in the balance, there is reason for both teams to give us absolutely no offense in the Sunday night game.

That’s because a tie between the Chargers and Raiders would award both franchises a playoff berth. So all they need to do is agree to play the game out at 0-0.

Of course, we’re talking about alpha-male central in the NFL. So it’s hard to imagine such a thing actually happening.

Instead, we’ll assume we get a regular football game. And this will be a rematch of a 1-sided Week 4 Chargers victory. Justin Herbert and crew collected 28 points and 380 yards vs. just 14 and 214 for Derek Carr’s clan.

That game marked – by far – the best performance of the season for the Chargers’ defense, by Football Outsiders DVOA. Their 2nd-best outing came more recently, in a Week 13 win at Cincinnati. But the worst came just 2 weeks ago … at Houston. So it’s tough to bet on that defense stifling anyone.

Let’s check the showdown values by our Week 18 projections … 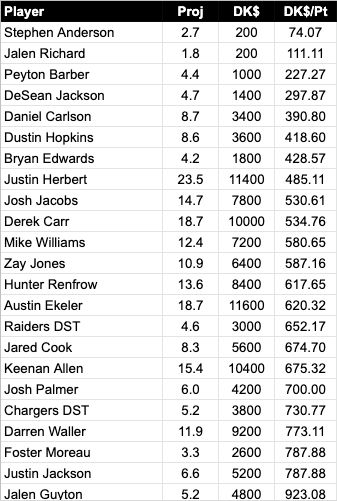 The 1st thing to watch here is whether Josh Jacobs and Darren Waller play. Both guys enter the night questionable, but both are expected to play. Just make sure you confirm before locking either into a lineup. And both should be in consideration. The Chargers rank 26th in overall defensive DVOA, 27th in TE-coverage DVOA and 32nd in run-defense DVOA.

As I mentioned earlier, DVOA also says the Raiders' run D has been solid. But Vegas has allowed the 4th-most PPR points to RBs on the year. Four straight Raiders opponents have produced RB TDs. 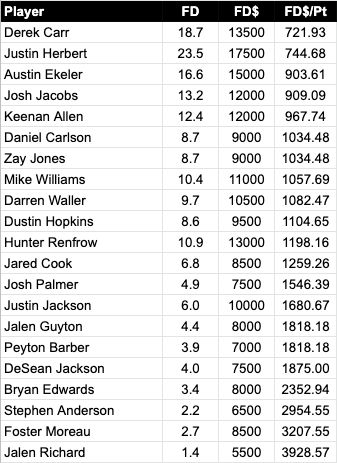 Waller might be an even better value than we give him credit for on FanDuel. A full-strength Waller would obviously carry upside well beyond our projection -- and might be challenging Austin Ekeler for the 2nd-highest FD salary. He'll obviously carry some risk as well, coming off a knee injury that has sidelined him since Thanksgiving.

On the other side of the ball, the Raiders might be without lead CB Casey Hayward (questionable: ankle). That would only enhance the matchup for Chargers wideouts. I'll update Hayward's status when the inactives come out at 7 p.m. ET.