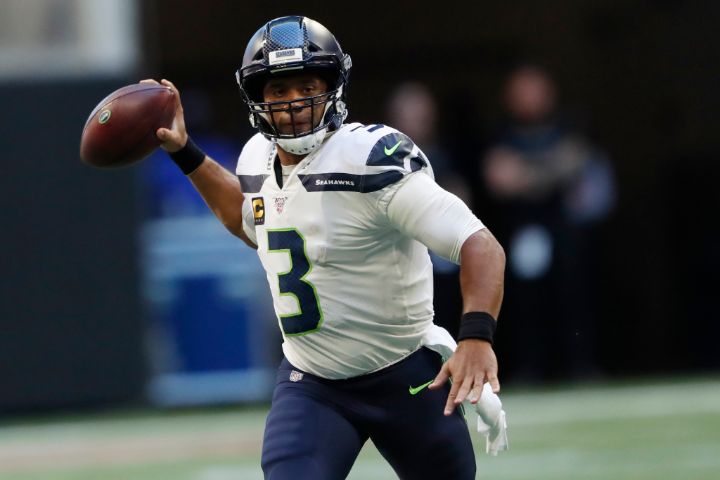 Are you ready for Week 12 to go out with a whimper?

To be fair, Washington is coming off a pair of nice wins over Carolina and Tampa Bay. The WFT even combined with the Panthers to over last week’s game total (... which was only 43). That followed 4 straight unders in Washington games, and the Tampa win followed 3 consecutive weeks of Washington scoring 13 points or fewer.

Seattle has amassed 474 total yards … in the 2 games since Russell Wilson returned. Five of the past 6 games have found the Seahawks rushing for less than 100 yards. And only 1 of their games all season has gone over (Week 2 vs. Tennessee).

Scoring could be scarce between teams that rank 21st (Washington) and 24th in points per game to date. But there has to be an edge to find somewhere … right? 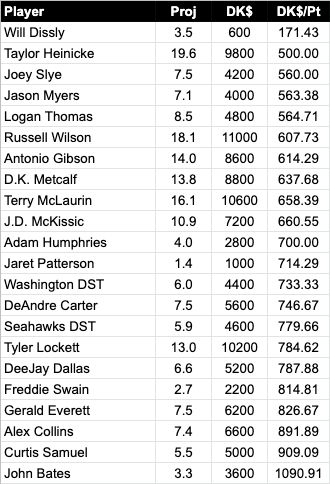 It’s almost like the DK pricing algorithm factored in name value at QB. Russell Wilson checks in at the same price he carried in showdowns last week, which was up $400 from his return week -- even though Wilson has posted awful totals of 7.64 and 8.48 DK points.

Heinicke, on the other hand, is coming off a 23.14-point outing and leads Wilson by 1.3 points per game for the season. It’s still a 1.0 PPG lead for Heinicke even if you remove the game he entered late and the game Wilson left early.

Their overall backgrounds clearly get factored in here, starting Wilson from a higher standing. But he also gets the better matchup. No defense is giving fantasy QBs a bigger scoring boost to date than Washington, according to our adjusted fantasy points allowed formula. Seattle ranks just 18th on that same list. The Seahawks have been up and down in run defense through the season but have improved against the pass.

Here are their weekly DVOA ratings from Football Outsiders (the more negative the better for a defense):

As you might be able to tell from that 14.0% vs. Colt McCoy last week, though, this still isn’t a good pass defense. For the season, Seattle ranks 25th in pass-defense DVOA, compared with 9th against the run.

So the matchup seems to favor Heinicke & Co. more than Antonio Gibson. That doesn’t mean you need to ignore Gibson in building showdown lineups, of course. The matchup ran against him in the Tampa game as well, and he finished 24 carries and 2 TDs (despite gaining just 2.7 yards per rush).

What about the Washington defense? That just might be anyone’s guess.

For the year, Washington has also played the run significantly better (11th in DVOA) than the pass (30th). With Seattle wishing it had a healthy RB of Gibson’s caliber, maybe the table is set for a Wilson rebound game.

Metcalf, as I mentioned, looks cheap. His DK showdown salary is down $1200 vs. last week, to its lowest level all season. That’s understandable coming off 7 total catches for just 57 yards over the past 2 weeks. But Metcalf drew 8 targets in each of those games and narrowly missed securing a TD last time out.

Tyler Lockett’s individual matchup might be even better, though. He appears likely to face more William Jackson III in coverage, the weaker of Washington’s 2 outside CBs. Lockett also spends much more time in the slot, which has recently been manned most often by S Landon Collins. That would be a significant mismatch in Lockett’s favor. 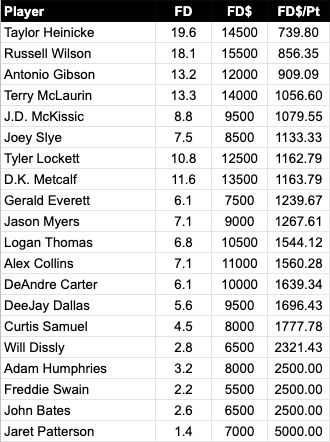 As usual, the FD side is a lot less interesting because of less creative pricing and no multiplying of salary for the “MVP” spot. I’ll use this spot to mention that the Seahawks have allowed the 2nd most points per game to RBs, across formats. Only the Bengals have allowed more RB receptions per game.

J.D. McKissic could be a particularly intriguing option to go with a Russell Wilson-centered lineup. McKissic’s role would likely grow if the Seahawks could manage to jump out to a big lead in this one. Wilson dealt with a finger injury and was relatively disappointing last season. But we like his odds of rebounding in Denver this year. Here's why ...