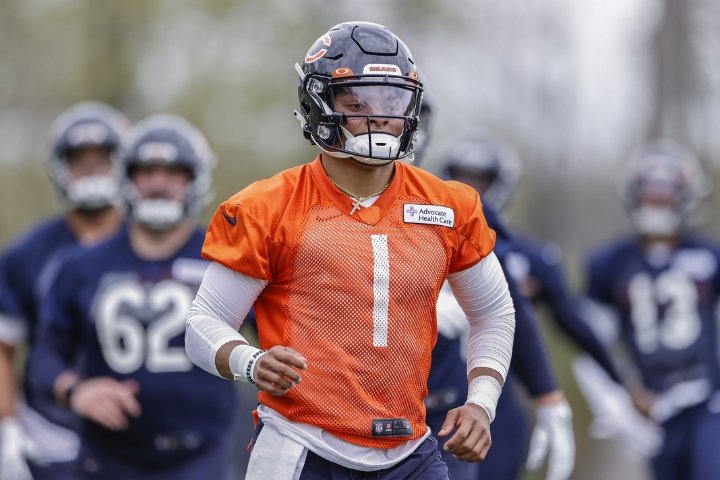 He’s not Chicago’s starter … yet. But if you’ve read our Fields profile, then you know it’s likely to happen soon.

Look at only the 36 QBs who went among the top 12 picks in their drafts, and that median dips to Game 3. Factor in that HC Matt Nagy is likely feeling some heat in his seat and that the Bears’ season-opening starter is the lackluster Andy Dalton, and it’s not hard to see the path to early playing time for Fields.

Chicago’s new QB looked pretty good to us in the preseason, but the quality of his play really only matters insomuch as it gets him onto the field and keeps him there. Jalen Hurts delivered top-4 fantasy production at the position over the final 4 weeks of last season despite grading out 49th among all 60 Pro Football Focus-graded QBs in passing over that stretch.

Fields arrives as a clear upside runner. He passed much more efficiently as a collegian than he’s commonly credited for. His range of outcomes includes immediately producing as a top-8 fantasy QB, just as Cam Newton did back in 2011, Robert Griffin III did in 2012 and Hurts did over the final quarter of last season.

The only problem with Fields is that he won’t be on the field right away. But you can still wait on a QB, get your high ceiling in him and find early-season help in a player such as Darnold.

Teddy Bridgewater had a low-ceiling run as Carolina’s starting QB last year, checking in 19th in total fantasy points and only twice all year scoring at a top-12 level. That’s why the Panthers moved on from a serviceable option, clearly believing Darnold to be an upgrade.

The situation remains positive. Carolina climbed from 27th in offensive DVOA in 2019 to 17th in the 1st season under HC Matt Rhule and OC Joe Brady -- despite losing Christian McCaffrey for 13 games. Curtis Samuel is gone, but rookie Terrace Marshall might quickly turn into an even more exciting player. D.J. Moore heads into just his age-24 season, with 3 promising NFL years behind him. And the new QB knows Robby Anderson from 2 years together with the Jets.

Darnold looks poised to enjoy easily the best setup of his career. And the schedule wants to help him start strong:

vs. Jets
vs. Saints
at Texans
at Cowboys
vs. Eagles

Among those 5 defenses to open the year, only the Saints ranked higher than 21st in pass-defense DVOA a year ago.

Darnold -- with his stacked WR group -- against a Jets D that stunk last year and has already lost its top 2 edge options for all of 2021 might land inside the top 12 of our Week 1 rankings.

If you drafted early, then this guy was a true sleeper. Even now, though, Michel remains a high-ceiling pick at cost.

Don’t expect Michel to last to Round 13, as our current ADP says. But he’s still going at the bottom of RB3 range in Best Ball 10s drafting over the past week, leaving the board in Round 9.

He lands in a Rams backfield that -- at best -- presents nothing behind Darrell Henderson. And we still don’t even know just how HC Sean McVay feels about Henderson. The incumbent topped 15 carries just once last year and exceeded 3 targets only once, watching the limited Malcolm Brown beat him in that category.

Michel hit the NFL as a late 1st-round pick with a 3-down skill set, twice leading Georgia RBs in receptions.

We could quickly see a near-even work split here. And Michel is obviously just a Henderson injury away from taking over the backfield in an offense that appears headed for plenty of yards and scoring.

It’s fair to wonder who among Patriots gains the most upside from the team dumping Cam Newton for Mac Jones right away. Our guess … everyone.

It’s not that Newton was terrible last year and Jones will immediately be awesome. It’s more the offensive change that the move signals.

New England passed on just 48.7% of offensive plays last year. Only Baltimore passed on a smaller percentage of plays. And that share fell well below what the Patriots did annually with Tom Brady at the helm.

More passing volume will help the fantasy upside for all New England pass-catchers, and Meyers looks like at least as good a bet as anyone to lead that group. He did so last year, claiming 18.4% target share despite seeing just 1 total target over the first 5 games.

The reports have remained glowing on Meyers heading into Year 3. Multiple observers have pointed to the 24-year-old as clearly the team’s top-performing receiver, even after the Patriots tossed loads of free-agent cash at Nelson Agholor, Kendrick Bourne, Jonnu Smith and Hunter Henry (who has missed most of camp and all of the preseason with a shoulder injury).

We’ll see just how much target share Meyers gets in the regular season. But he’s well worth betting on as a 5th or 6th WR on your roster, especially as long as he’s going outside the position’s top 50.

Do you feel uneasy drafting Kenny Golladay and his lingering hamstring issue? How about Evan Engram and his fresh calf injury? Heck, even Darius Slayton went down in the preseason finale.

Well, if you’re out on any or all of those guys, then why not take a shot on Shepard?

There was no Golladay last season. But when the rest of that crew was healthy and playing together -- plus Golden Tate -- Shepard was drawing 24% target share to lead the way.

There’s likely room for the 28-year-old to hover around 20% this season, even with Golladay and others healthy. And the season-opening injuries to areas that can be tricky to move past only add opportunity upside.

Even with a career-low 9.9 yards per reception and just 3 TDs last season, Shepard still checked in 34th among WRs in PPR points per game. That’s not winning championships by itself. But finding a WR3 when you’re drafting your 6th can certainly help your title run.

(By the way, it sounds like the Giants don’t expect Engram to miss too much time -- if any. So he just might be a value in drafts right now as well.)

Did this rookie have TOO good a preseason? He led all Panthers with 9 catches and 181 yards -- 99 more yards than his nearest teammate. A 60-yard catch-and-run helped that. And a 13-yard TD from Sam Darnoled in the preseason finale certainly didn’t hurt things.

Marshall is running a clear 3rd at WR behind D.J. Moore and Robby Anderson, but he’s lining up both inside and out and hung right with Moore and Anderson in target distribution from Sam Darnold -- albeit in limited exposure for all.

It can’t hurt that Marshall has history with OC Joe Brady from LSU, and Pro Football Focus graded him 8th among 172 qualifying WRs in preseason receiving grade.

Best of all, recent drafting still finds Marshall going around the bottom of WR5 range or into WR6 territory. There’s only upside from that area.

The FFPC’s TE-premium scoring format would seem to behoove you to dig up late-round values at the position. And yet, Hooper continues to go outside the top 20 at his position across draft formats there.

That’s understandable if you look at his full-season results. Hooper ranked just 21st in PPR points in a rough season for the position; 22nd in points per game.

But he was drawing 18.1% of Browns targets before his Week 7 appendectomy. For the year, only 5 TEs beat that share. Hooper’s 14% target share for the year -- with 3 missed games and a dip after his return -- still ranked 10th at the position.

Career lows in catch rate and yards per target will need to rebound to help him capitalize, but it’s not hard to envision improvement in both areas with better health, a full offseason and a 2nd year in the system for both Hooper and QB Baker Mayfield.

With Arthur Smith as OC last season, the Titans saw A.J. Brown and Corey Davis lead the way in targets. The next 2 in that category: TE Jonnu Smith and TE Anthony Firkser, each topping 10%.

Calvin Ridley looks like these Falcons’ A.J. Brown, in terms of being the lead wideout. But if there’s a Corey Davis here, it’s probably Kyle Pitts. So is Hurst Jonnu Smith or Anthony Firkser?

It might not matter. Those Titans ran the ball on a little more than half of their offensive plays. These Falcons will almost certainly not. They don’t have Derrick Henry, and Arthur Smith has indicated Henry was a difference-maker, a guy who demands a certain share of touches and dominates the offensive plan.

Expect these Falcons to pass more. And we’ve seen multiple indications that Hurst will still factor prominently into the offense, despite Atlanta drafting Pitts 4th overall.

We won’t know how much target volume is available here until the season starts. Just 16 TEs reached 70 targets last year, though, with only 12 cracking 80. Hurst ranked 11th in that category at the position, and he actually saw a larger share (15.5%) in full Julio Jones games than he did in games Jones missed or left early (11.7%).

So there’s potential for Hurst to remain in a similar role to the one that found him finishing 9th among PPR TEs.