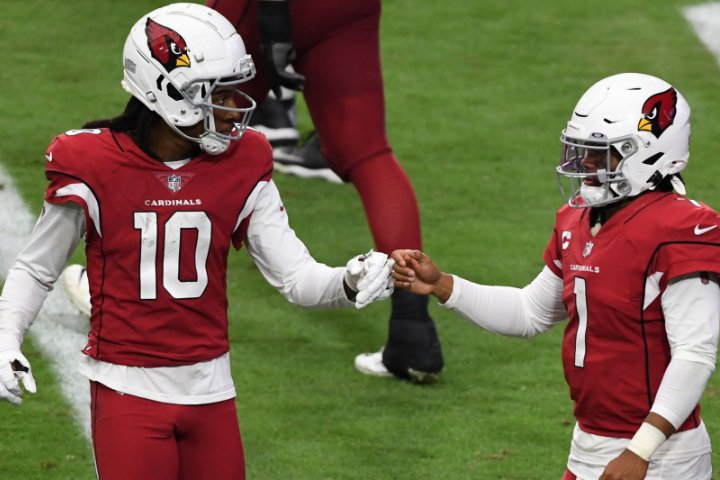 We got LOTS of offense when these 2 teams met back in Week 4.

The Los Angeles Rams and Arizona Cardinals hit that week with the league’s highest over/under, and then hit the over with 57 points.

Each offense topped 400 yards. Both QBs topped 20 FanDuel points. Both Arizona RBs landed inside the top 12. Three WRs from the game finished among the top 26. Even Maxx Williams delivered a 5-66-1 receiving line.

The rematch comes just a week after both Kyler Murray and DeAndre Hopkins returned from injuries. The Rams shed a star WR (Robert Woods) but found another (Odell Beckham) along the way – and will go without their starting RB for the 2nd straight week. Darrell Henderson’s bout with COVID keeps Sony Michel in the lineup a week after he racked up a 24-121-1 rushing line vs. Jacksonville.

The Cardinals backfield’s outlook remains uncertain as of this writing. HC Kliff Kingsbury would only say that Chase Edmonds could “possibly” return after missing the past 4 games with a high-ankle sprain. If he doesn’t make it onto the active roster for the game, then James Conner’s upside increases significantly – especially in DraftKings’ full-PPR format. Of course, even if Edmonds is active, he doesn’t seem to be a great bet for his usual workload.

This should also be the 1st time we get to see a fully integrated Zach Ertz with a fully healthy Cardinals pass offense in a normal passing environment. Murray attempted just 15 throws against an overmatched Bears team on a rainy day in his Week 13 return.

And it’s a return to the scene of the only matchup all year that has held Cooper Kupp to single-digit fantasy points. 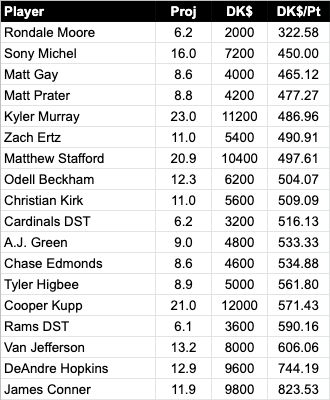 Rondale Moore tops the value chart here because he comes in at a salary well below any other player we projected for either team this week. Moore doesn’t come with a high fantasy ceiling, despite what the 11-catch Week 11 might suggest. That’s the only game since Week 5 that found him exceeding 5 targets or 25 receiving yards. And his playing time has dipped over the past 3 weeks – even before DeAndre Hopkins returned. Still, Moore could garner a few extra opportunities if Chase Edmonds remains out (he carried 3 times last week) and has the speed to turn any touch into a big play.

Primary slot WR Christian Kirk gets a matchup upgrade with Rams slot CB Dont’e Deayon set to miss the game on the COVID list. Kirk drew just 1 target in the 1st meeting but saw normal playing time. He should also get back to playing even more of his snaps in the slot, now that Hopkins is back. Kirk still worked there primarily, but was running from the slot more than 90% of the time through the 1st 5 games, compared with 3 games under 72% among the past 4 contests.

Murray’s return should also boost his average depth of target. Kirk finished each of the past 4 games with ADOTs of 9.0 or shorter. Through the 1st 8 games, he dipped below 12.7 only twice. 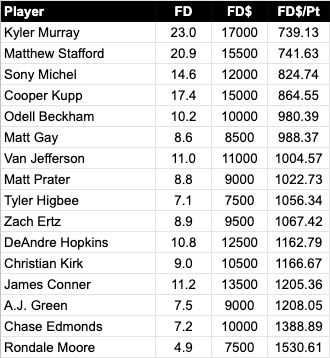 Sony Michel climbs ahead of all the pass-catchers on the FD chart, in part because of a favorable salary vs. the other lead offensive pieces. He also gets a decent matchup, given the strength of both defenses. Arizona ranks just 15th on the year in run-defense DVOA. Three of the Cardinals’ 6 lowest single-game DVOA ratings in that area have come in their past 3 games.