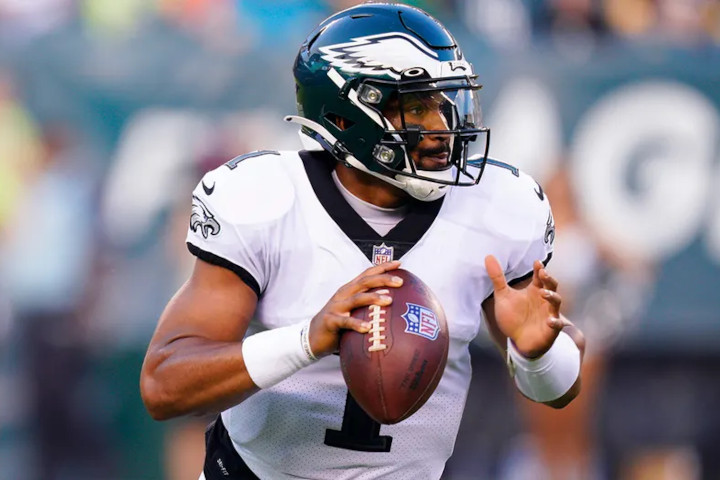 I’m gonna be honest: I don’t love Week 1 DFS. I like it. But I don’t love it like I love the rest of the weeks.

For starters, we’re flying even more blind than usual with no 2021 data to go off. But, more importantly, the pricing tends to be the softest we’ll see all season. That makes it easy to build a quality lineup. And the easier it is, the less of an edge we have.

So, maybe go a bit lighter on your DFS action this week. Or don’t.

Either way, here are the guys I’ll be considering in Week 1 DraftKings cash games:

I always prefer to play a QB with a strong rushing projection in cash games. Most will run you $7,000+. Not Hurts this week.

He has a healthy offensive line and pass-catching corps heading into Week 1. And he gets a plus matchup in a dome vs. a leaky Falcons defense.

Jones was never cheaper than $6,800 on DraftKings for any of his 14 regular-season games last year. He averaged 19.2 DK points in those outings.

I expect Jones to play an even more fantasy-friendly role this season -- particularly in the passing game with Jamaal Williams out of the way.

He gets a Saints defense that allowed the 2nd fewest DK points to RBs last year. But they lost multiple starters from that front 7. And DL David Onyemata will miss this one on suspension.

I barely shut up about Mixon all offseason. You didn’t think I’d leave him out of this article, did you? Not at this price.

Mixon looks like the single best touch-per-dollar value on the Week 1 slate. He averaged 19.8 carries and 4.3 targets in his 6 games last year. And he might be in for even more volume in 2021 with Gio Bernard gone. ESPN’s Ben Baby recently named Mixon the Bengals’ training camp MVP.

I expect the Vikings defense to be better than last year’s unit, which allowed the 9th most DK points to RBs. But volume alone should carry Mixon at this price.

Preseason usage suggests that Gibson will continue to lose 3rd-down work to J.D. McKissic. That’d be a problem if he was priced at $6,900. We can live with it at $5,900.

Gibson should still play a big role in this passing game. He saw 5 targets on 24 preseason snaps. And he’ll dominate the rushing work after an impressive rookie campaign that saw him rank 5th in Pro Football Focus rushing grade among 47 qualifying RBs.

You won’t often see me recommending a volatile, high-priced WR like Brown for DK cash games. But we have the salary for him. Upside is more important than usual with the soft pricing. And I expect the Titans passing game to smash on Sunday.

Tennessee’s 27.5-point implied total is tied for 2nd highest on the main slate. We want a piece of this offense.

Allen averaged 12.2 targets on a huge 28.8% target share in 11 healthy games with QB Justin Herbert last year. If he sees anything close to that type of volume in 2021, this price will prove to be about $1,000 too cheap.

Allen draws a loaded Washington defense on Sunday. But the unit’s 1 weak spot is at slot CB, where Darryl Roberts is expected to start. Allen played 52% of his snaps in the slot last year.

Callaway was the star of Saints training camp and 1 of the stars of the preseason, showing obvious chemistry with QB Jameis Winston in a big 104-yard, 2-TD outing in Week 2.

This is probably the cheapest we’ll see Pitts all season. We saw him for just 2 snaps this preseason -- but 1 of them included this catch-and-run that shows exactly why this rookie is such an exciting fantasy prospect.

The 2020 Eagles finished 26th in Football Outsiders’ TE coverage rankings and allowed the 6th most DK points to the position. S Rodney McLeod is iffy for this one with a knee injury.

I don’t think you need to go dumpster-diving at TE this week. But if you want to, Tyler Conklin ($2,900) looks like the best play.

The Bills are 6.5-point home favorites vs. the Steelers on Sunday. Game script figures to lead to a bunch of passing from Pittsburgh, which means sack and INT opportunities. Also note that the Steelers’ 21-point implied total is 6th-lowest on the main slate.