When the Browns and Steelers last met, we were all treated to a pretty boring game.

The teams combined for just 25 points in a 15-10 Pittsburgh road win. Najee Harris grinded out 91 yards on 26 carries (3.5 per rush), tying his season high for attempts.

Nick Chubb handled a mere 16 carries (for 61 yards) on the other side in his 1st game back from a calf injury. He has topped 120 yards on the ground in 3 of 6 appearances since and now meets a Pittsburgh D that ranks a woeful 30th in Football Outsiders run-defense DVOA.

Cleveland’s D, meanwhile, arrives to the rematch down both starting safeties and slot CB Troy Hill because of injuries. The Browns’ defense has been middling vs. both the run and the pass for the year but has especially fallen off vs. the ground game over the season’s 2nd half.

On offense, the Steelers get TE Pat Freiermuth back after he missed Week 16 with a concussion. His 7 targets in the 1st game ranked 2nd on the team, and the rookie snagged the game’s only TD. Cleveland, however, hits the rematch ranked 9th in the league in TE-coverage DVOA. The Browns have gotten a boost in that area from rookie LB Jeremiah Owusu-Koramoah.

The storyline that figures to dominate the broadcast and may or may not matter for fantasy football purposes is Ben Roethlisberger all but conceding that this will be his last home game for the Steelers.

Let’s get to the values … 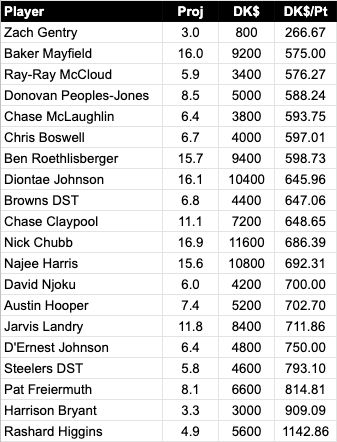 TE Zach Gentry drew 4 targets in Pat Freiermuth’s absence last week and could maintain a role even with the rookie back. It was Gentry’s 3rd game of 2+ targets among the past 5. He’s not a good bet for significant production, but anything he can give you from an $800 salary could be helpful.

WR Ray-Ray McCloud’s target counts have been all over the place. He went from a season-high 12 in the Week 10 tie vs. Detroit to 2, 4, 8, 3 and 8 the past 5 weeks. The defenders missing from the middle of Cleveland’s pass coverage can only add upside to the slot man, making him intriguing on this full-PPR site. 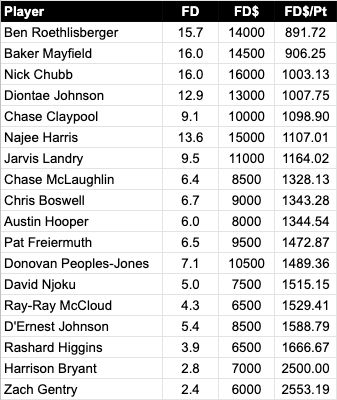 Ben Roethlisberger checks in $500 cheaper than Baker Mayfield on FD this week, despite leading the Cleveland QB by a little more than a point per game. Roethlisberger has also averaged 7.6 more pass attempts per game for the year than Mayfield. For the season, the teams rank right next to each other in the middle of the league in situation-neutral pass rate. There’s been a bit more separation since Week 8 (the Steelers’ bye), though, with Cleveland passing 53.4% (11th) and Pittsburgh 48.9% (19th).