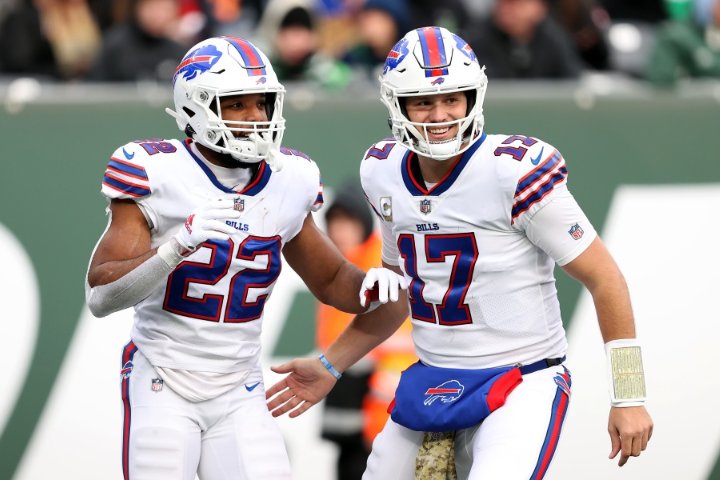 What’s the story going to be for tonight’s Bills-Patriots game? Well, it just might be the weather.

Monday is starting out on the warm side for December in western New York but rainy. The temp is heading into the 30s through the afternoon and evening, though, with the rain expected to shift to snow. And by 8 p.m., we have high winds as the primary weather pattern for Orchard Park.

The good news: The “high-wind warning” from the National Weather Service is only in effect until 7 p.m. ET, as of this writing. So at least the “damaging” winds are expected to finish before they’re damaging Josh Allen passes and Nick Folk kicks. But that doesn’t necessarily mean the wind won’t be a factor come game time. It’s still expected to be blowing in the range of 20-25 mph.

What’s that mean? We should probably temper expectations for the passing and kicking games on Monday Night Football. What else should we expect? Let’s check the charts … 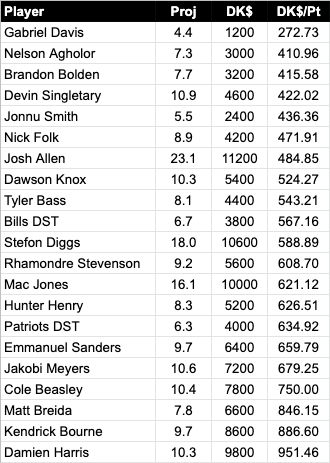 I headed into this expecting to point to Matt Breida as a value play in tonight’s showdown, but his 3 TDs among the past 3 games appear to have broken DK’s pricing algorithm.

I double-checked, just to make sure he really costs $2000 more in showdown salary than Devin Singletary this week. And it’s true.

It does make sense, though. Breida scored 13.5, 7.7 and 19.0 DraftKings points over the past 3 weeks. Singletary hasn’t reached 13.5 in a game since Week 2 and has gone 11.9, 7.3 and 5.8 over the same 3-game span. Singletary wound up leading the team with 15 carries in last week’s win over the Saints. But it was Breida in the backfield for Buffalo’s 1st 2 series and leading Singletary 8-4 in carries at halftime. Breida likely would have finished the game as the lead ball carrier but blew a blitz pickup and disappeared from the field for about a quarter and a half.

The Bills have changed up their backfield rotation so many times this year that it’s tough to know what tonight’s plan will be, but Breida looks like the best bet for production. It’s quite possible that we’re wrong to have Singletary projected higher. It’s also possible that they activate Zack Moss this week and give him the most backfield touches.

If Moss turns up active, he becomes the top play pretty easily in this backfield. His showdown salary is just $600. Frankly, he’d be a sneaky play for the Captain spot. Despite now being a healthy scratch twice this season, Moss still leads the team in rushing TDs (4-3 over Josh Allen) and has scored 50% of the Bills’ total RB TDs. He has also doubled Singletary in yards per reception and trails him just 3.0 to 2.9 in targets per game. 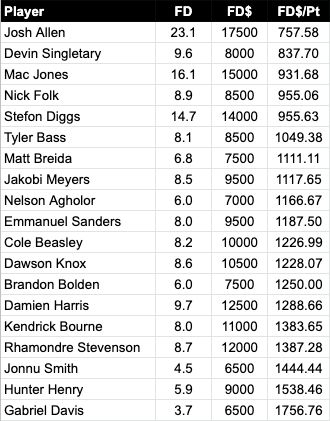 The line on this game has come down from 46 at open to just 41 total points, likely thanks mostly to the expected weather. The Bills and Patriots rank just 16th and 23rd, respectively, in Vegas implied team total among the 28 teams playing in Week 14.

Add the weather to 2 of the league’s best defenses, and it’s fair to not expect a whole lot of points from this contest. That makes trying to figure out the Bills backfield more worthwhile. New England’s backfield, meanwhile, seems to be priced way up on FanDuel.

At $12K and $12.5K, respectively, Rhamondre Stevenson and Damien Harris are TD-or-bust prospects. Derrick Henry and Jonathan Taylor hung big games on the Bills -- Taylor’s with DT Star Lotulelei out -- but all other RBs have combined for 1 rushing score, 1 receiving score and 3.08 yards per carry.

I know we’re less than a year into Stevenson’s career, but I’m gonna go ahead and say both backs are closer to “everyone else” in ability than they are to Henry and Taylor.

Even without a full point per reception, Brandon Bolen at $7500 might just be the best bet among Patriots RBs. Last week’s 36-13 demolition of the Titans found playing time evenly split among all 3: 22 snaps for Harris, 20 for Stevenson, 19 for Bolden.

The biggest change for Buffalo this week will be playing without lead CB Tre’Davious White. That can only help Patriots wideouts, though weather will obviously be a challenge.